Not to tempt fate or anything, but I should have a few Westlake-related posts again this week, both on a Dortmunder and Parker tip. 'Course, now I've stated that I'll doubtless be foiled by the vagaries of international shipping, but I've got at least one post brewing – other than this one – that isn't reliant on a particular book turning up. Let's kick off, though, with this: 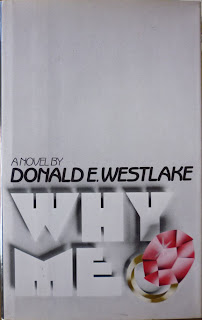 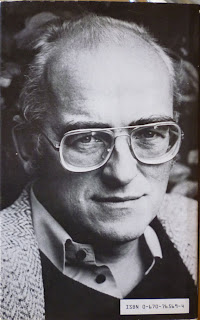 A US hardback first edition of Donald E. Westlake's Why Me, published by The Viking Press in 1983, with dustjacket art by Bob Shein and jacket design by R. Adelson. This is the fifth book in Westlake's series starring hard luck heister John Dortmunder, and again centres on Dortmunder and crew stealing a jewel that's a bone of contention between two countries, a la The Hot Rock – and, indeed, the Parker novel The Black Ice Score. Nothing like recycling a plot, eh? I expect Westlake throws in a fair few twists on the formula though.

And with the arrival of this, I now have first editions of all five initial Dortmunders. Time for a Dortmunder gallery, you say? Why the devil not.
Posted by Nick Jones (Louis XIV, the Sun King) at 07:22