Praise the Lord, sing Hallelujah, hang out the bunting and, if you feel so inclined, perhaps do a little jig too: the book I've been waiting for for what feels like bloody ages finally turned up in the post yesterday. Phew. That book isn't this book, however. That book – a Westlake tome, surprisingly enough – I'll come back to, but first we have this book, which I've been meaning to get to for a bit: 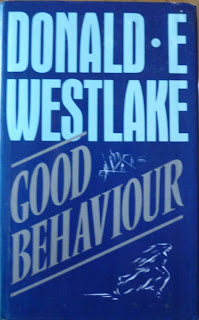 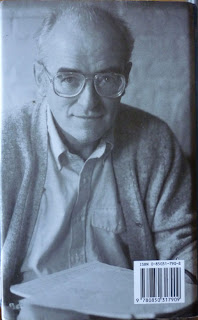 A UK hardback first edition of Donald E. Westlake's Good Behaviour, published by Allison & Busby/W.H. Allen & Co. in 1987, with jacket design and illustration by Peter Rozycki. This is the sixth of Westlake's novels starring John Dortmunder and his motley crew of hapless thieves, which I think involves nuns, a kidnapping, and the attempted overthrow of a country. Rather different from previous Dortmunders then.

This copy of the book came alllll the way from Australia; I did find three copies of this edition on sale from the UK online, but one of those was described as having a torn dustjacket, which, on further questioning of the seller, turned out to have a few tears in it and to be "not that good", another was a library re-bind with no jacket, and the final one was too expensive. So Australia it was. Sometimes you have to go to the other side of the world to get what you want.

Let me take you back to 1985, when US retail company Neiman-Marcus decided to do a deal with Mysterious Press to print a special limited signed, slipcased edition of Good Behavior to be sold through their department stores and catalogues as a Christmas promotion. This edition of the book, restricted to 1000 copies, was scheduled to be on sale eight months before the Mysterious Press edition, making it the proper first edition. A fine idea... except somewhere along the line someone misspelled Neiman-Marcus on the limitation leaf in the book, swapping the "e" and the "i" – and the books printed like that. It's the kind of tiny mistake that brings publishing types out in a cold sweat, and sure enough Neiman-Marcus ordered the whole run destroyed, except for supposedly thirty-six copies (although I suspect a few more escaped).

You can find Neiman-Marcus copies online easily, often for not that much money, so it's not as scarce as you might think. But I do feel for the poor sod who missed that mistake. I've had similar experiences myself, and it's not a nice place to find yourself.

Anyway. As for the other Westlake Score I mentioned at the beginning, that one completes another run of Westlake books for me, so I'll be blogging about that soon. If I don't get to it before the end of the week, however, might I direct my fellow Stark/Westlake obsessives to previous Westlake posts from this week you might have missed, either on Existential Ennui or elswehere; The Week in Westlake, if you will:

Richard Stark, Robert McGinnis, and the Search for the Perfect Parker

Book Glutton: Arms and the Man with the Getaway Face