And so Tuesday rolls around once more, which means it's time for me to bang out a post on the American comic books I'll probably be buying this Thursday. Now, I'm really not sure how much longer I'll be doing these posts. Frankly, I thought last week's Must Be Thursday was a little lacklustre – and I'm the bugger wot wrote it. I can't quite see the point in continuing to knock out these weekly comics guides if even I'm not terribly interested in them (I'm pretty sure nobody else is). So if they suddenly vanish, don't be surprised. That's if you even notice.

All that said, let's soldier on with this week's selection and see if we can drum up some enthusiasm along the way. From DC Comics this week there are three comic books I'm interested in, two of which are published by WildStorm: 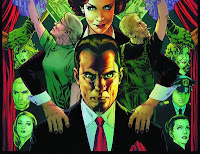 Not much to say about DC Universe Legacies #4 at top left there, except I'm still enjoying this decidedly old skool superhero affair. Next to it, however, is something called Ides of Blood #1 from WildStorm. It's yet another vampire comic, but before you grunt disinterestedly and roll over, this one looks slightly more unusual. It's an alternate history affair set in 44 BC, where Julius Caesar has conquered Transylvania and vampires are now Rome's underclass. I've never heard of the writer, Stuart C. Paul, or indeed the artist, Christian Duce (although a glance at his website reveals him to be decent enough, if a little stiff), but this could be worth a look. Interview with Mr. Paul here.

And then there's Ex Machina #50, which is the final issue of a series that has been consistently excellent and occasionally brilliant. I wrote a little about it here, so suffice it to say I'll miss it when it's gone. Sniff.

Meanwhile, over at Marvel Comics, we have these:

I'm starting to enjoy New Avengers now (#3 seen here, top left), so I'll be sticking with it for a while, but Ed Brubaker's Secret Avengers (#4 seen top right) seems to be suffering from the same drawn-out storytelling problems that all his superhero titles are afflicted with at the moment, whereby fights last for pages and dialogue is gradually disappearing. Also, everyone seems to say "damn it" all the time. There's at least one "damn it" in every Brubaker comic at the moment. Mebbe the writer's distracted by something else he's working on, but I kind of feel like I'm getting short changed on his superhero titles, which I only really buy because he's writing them. Or half-writing them, as would appear to be the case. Be nice if he could pack a bit more into each issue is all I'm asking.

Finally, there's Marvel Universe vs. Punisher #2, the first issue of which was a little cracker, a kind of I Am Legend for the Marvel U. This may not be the Max version of the Punisher, but writer Jonathan Maberry is the first person to really nail the character since Garth Ennis. Well done that man. Plus, it's Goran Parlov on art, which strengthens the ties to Ennis' run on Punisher Max. I'd rate this Comic of the Week in a normal week, but Ex Machina #50 has to take that honour. Almost Comic of the Week, then.
Posted by Nick Jones (Louis XIV, the Sun King) at 05:47