Thanks to a series of Westlake Scores, I've ended up reading – and reviewing – some of Donald E. Westlake's earliest novels this year. I wrote about his debut novel – under his own name, that is; he'd had a number of pseudonymous sleaze works published prior to it – The Mercenaries (1960), back in January, and then last week reviewed his third own-brand book, the brilliant 361. Nestling in-between those two novels is Killing Time (1961), which, in its 1962 British T. V. Boardman edition, I blogged about as a Westlake Score back in 2010 but only just got around to reading. And while it's certainly not the equal of 361, it's still a fine crime novel, and in its blistering finale again affords a glimpse of what was to come in Westlake's Parker novels (penned, of course, under the nom de plume Richard Stark) as the 1960s unfolded. 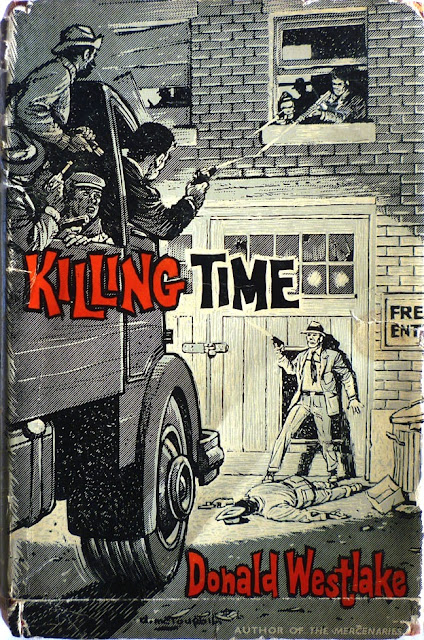 Written, like The Mercenaries and 361, in the first-person, Killing Time is narrated by Tim Smith, a private investigator living and working in the small town of Winston. Tim is eating in a diner late one night when a stranger enters, pulls a gun and attempts to kill him. Pretty soon after that the assailant is himself shot dead by a gunman across the street, leaving Tim wondering who in Winston would want to see him dead, and just as importantly, why. Part of the answer comes with the arrival in Winston of Paul Masetti, an agent of a reform group called the Citizens for Clean Government. Having cleaned up Monequois and New Hamburg, the CCG have set their sights on Winston, and Masetti wants Tim to provide information on corruption in the town.

Tim, you see, has a filing cabinet full of the town's dirty secrets, making him a prime target for anyone wishing to stop those secrets seeing the light. Except Tim is happy in Winston: he has a girlfriend, Cathy, who, if he doesn't love her, is at least comfortable with her; a job he likes; and plenty of friends in high places. But one of those "friends" evidently wants him dead, and as the town divides into rival factions, Tim is forced to choose sides, leading to an all-guns-blazing showdown. 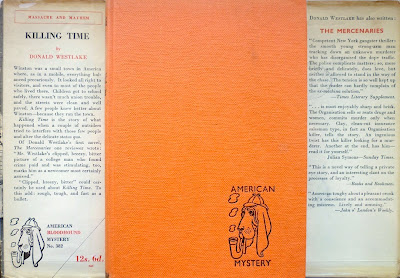 It's that blood-soaked climax that's the real draw in Killing Time; it's no accident that Westlake titled the book thus, because it's by far the most gripping part of the novel: a fast-moving, startlingly violent battle royale between dozens of gun-toting men in an industrial plant (note Boardman's blunt labelling of the novel on the dust jacket flap as "massacre and mayhem"). And it's here that we can see hints of some of the finales in the Parker novels – The Seventh (1966), The Handle (ditto) and Butcher's Moon (1974) spring immediately to mind. Prior to that, Killing Time is little more than an agreeable P.I. mystery, narrated by a wisecracking protagonist clearly in debt to Hammett (the book has been likened by some critics to Red Harvest):

Now I walked through the block-square City Hall Park in the late June sunshine. A few bums were loafing on the benches by the trees, resting up between elections. Over to the left, the town library was doing a thriving business in high-school students boning up for their exams. This year, the teen-agers were all imitating Sal Mineo and Brigitte Bardot, and they all looked as though they were going to do something obscene any minute.

But even in the pre-bloodbath stages of the book there are pointers to the Parkers: Westlake names one of Winston's clans "Wycza", prefiguring Dan Wycza, one of the Parker novels' recurring characters. That said, however, anyone expecting Killing Time to evoke the dour intensity of Stark – as, to an extent, 361 does – will be disappointed. Killing Time is an entirely different kettle of fish: an enjoyable whodunnit and an amusingly cynical portrait of a corrupt town, lifted by a brilliant ending that feels slightly bolted-on. 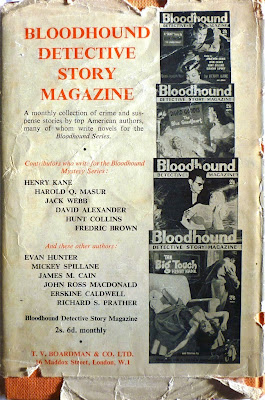 Right then: it's back to the signed editions next, with a 1964 thriller boasting a dust jacket that's already made it into the Existential Ennui Beautiful British Book Jacket Design of the 1950s and 1960s gallery...
Posted by Nick Jones (Louis XIV, the Sun King) at 05:54