Following on from that signed first edition of Jack Higgins's The Eagle Has Landed, I thought we could take a look at some of the other signed books I've acquired since this series of posts ended in September 2011 (although there have been one or two – actually make that three or four... or even five – signed editions in the interim). And let's begin with a book in which I myself had a hand, and which has recently been nominated for a Harvey Award: 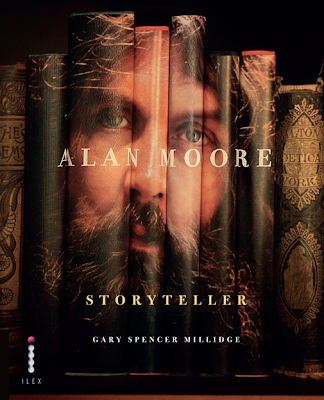 Namely, Alan Moore: Storyteller, by Gary Spencer Millidge, a terrific tome which I edited it in my capacity as managing editor at Ilex Press in Lewes. I blogged about it in July of last year when it was published, but later that month we held a signing for the book at Gosh Comics in London (which moved premises shortly after; it's now on Soho's Berwick Street), attended by both Gary and Alan – and indeed by a few Ilex staffers, myself included. Under those circumstances, it would have been remiss off me not to get a copy signed for myself, which is precisely what I did: 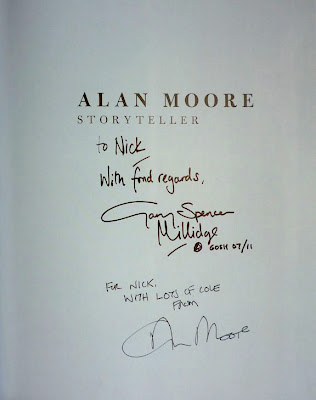 Splendid stuff. As I mentioned above, Alan Moore: Storyteller was nominated for a Harvey Award a couple of weeks ago, the winners of said awards to be announced at the Baltimore Comic-Con on 8 September. Previously Ilex won a Harvey for Helen McCarthy's The Art of Osamu Tezuka: God of Manga, and I reckon we're in with a shout of bagging another one for Alan Moore: Storyteller – assuming, of course, comics professionals – the ballot is only open to those who work within the comics industry – get off their bums and vote for the damn thing (needless to say, if you're a comics professional, I'd be eternally grateful if you could head to the Harvey Awards website and vote for the book before the ballot closes on 17 August).

Gary has blogged about how much it means to him to be nominated, to which I'd add that it means quite a lot to me too, for reasons I outlined in a post on the Ilex blog last year. I was fairly pleased with what I wrote back then, so, rather than go over the same ground again, I figured I might as well republish that post here on Existential Ennui, not only for posterity's sake but because it accurately – albeit somewhat prolixly – summarizes the impact Moore and his work has had on my life and, perhaps, gives some small indication of the passion and commitment that went into Alan Moore: Storyteller (not least from Gary). You can read the piece in full below, and I'll be back in a bit with some more signed editions – graphic novels, appropriately enough – and a Westlake Score-and-review...

You might have noticed over the past few months that we’ve been blogging fairly relentlessly – incessantly, even – about a certain book named Alan Moore: Storyteller. We’ve posted an excerpt from fantasy legend Michael Moorcock’s foreword to the book; added a link to the book’s author, Gary Spencer Millidge’s own thoughts on Storyteller, and posted a series of clips of Mr. Millidge in conversation with Ilex’s own Tim Pilcher at May’s Bristol Comic Expo; got very excited about the internet buzz that’s been building on the book; got even more excited about the imminent signing session for the book at London’s Gosh! comic shop; and even, courtesy of Ilex’s Vasiliki Machaira, presented a quite startling art installation created out of proofs of the thing. And those are just some of the Moore missives we’ve posted in the run-up to publication this week; take a saunter through the rest of this blog for further entries. 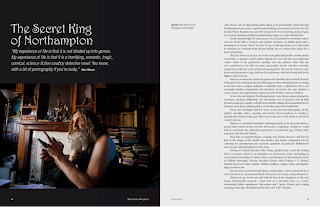 The reason there’s been so much frantic Alan Moore activity on the Ilex blog is because, quite simply, Alan Moore: Storyteller is an extraordinary work, and an important book not just for Ilex but for the comics field in general. It’s the most comprehensive, most sumptuously illustrated authorized biography yet published on Alan Moore’s life and career. You’ll be able to see that for yourselves as it hits bookshop shelves and online retailers this week – both in the UK and, via Rizzoli, the US – and I could spend an eternity extolling its virtues, such as the surprising and intriguing CD of songs and performances by Moore and friends that accompanies the book; or the never-before-seen, unpublished V for Vendetta script included as a double-gatefold; or the little-seen, legendary Big Numbers chart, which details how that groundbreaking uncompleted series would have played out over its full twelve issues; or the behind-the-scenes family snaps and notebooks and sketches that Mr. Moore kindly made available to Gary; or, indeed, Gary’s words, which, with the aid of copious quotes from Alan, paint a vivid picture of the man behind such towering achievements as Watchmen, Lost Girls and The League of Extraordinary Gentlemen.

But rather than do that, to celebrate the publication of Alan Moore: Storyteller, I thought I’d do something that readers of my personal books blog, Existential Ennui, have become more than familiar with; something that I find eminently easy to do; something, in fact – some would say ad infinitum, perhaps even ad nauseum – I never seem to tire of doing: I thought I’d talk about myself. 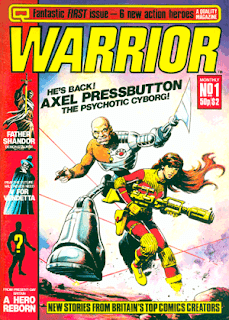 See, the publication of Alan Moore: Storyteller is, for me, the culmination of a decades-long love affair with Alan Moore’s comics. It’s a fascination that began nearly thirty years ago, in March 1982, when, without any kind of fanfare, a comics magazine called Warrior appeared in British newsagents. I can still recall the exact newsagent in which I purchased that first issue of Warrior: it was on Elmers End Road in Beckenham, south London; I think it’s still there – the newsagent, I mean, not the single copy of Warrior #1 that was sitting on its magazine racks; I bought that. With so many milestones in the comics medium since then – a good number penned by Mr. Moore himself – it’s easy to forget how revolutionary that first black-and-white issue of Warrior seemed. But revolutionary it was: an anthology comics title in the best tradition of British comics publishing, but quite unlike any seen before.

The garish cover of Warrior #1 was exciting enough. Drawn by Steve Dillon, it featured a cyborg with what looked like a meat cleaver on one arm; an incredibly sexy woman wielding a gigantic futuristic rifle; and a sidebar promising a sword-brandishing priest, a bizarre Guy Fawkes lookalike and a silhouetted superhero. Under that cover I was soon thrilling to the adventures of Axel Pressbutton and Laser Eraser, Father Shandor, Demon Stalker and Alan Moore and David Lloyd’s peerless V for Vendetta. I’d never seen anything like these comics tales, and was shaken to my twelve-year-old core by the mature, complex writing and artwork on display.

But the story that really blew my tiny young mind was the lead one, a short tale entitled “A Dream of Flying”. Written by Moore and illustrated by Garry Leach, in just eight pages it detailed the rebirth of a superhero of whom I’d never even heard. In the story, a tired, middle-aged newspaper journalist, Mike Moran, plagued by headaches and by unlikely dreams of being a super-powered hero, goes to cover the opening of a nuclear power plant in the Lake District. The event is hijacked by terrorists, and in the midst of the ensuing chaos Moran remembers a word he’s been trying to recall, a word that, for some reason, holds a strange significance for him. Uttering the word – “kimota” – he’s transformed in a blinding flash of light and a crack of thunder into a young, muscled man possessed of incredible abilities and dressed in a form-hugging costume. Besting the terrorists with a clap of his hands, he bursts through the roof of the facility and rockets into space, shouting out his now-remembered name: “I’m Marvelman… I’m back!” 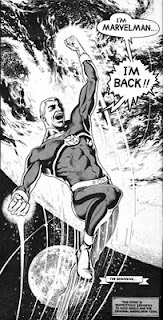 What was remarkable about this story was how real it all seemed. To a twelve-year-old kid raised on the larger-than-life, bombastic adventures of Spider-Man, Moore’s naturalistic dialogue and poetic captions and Leach’s meticulous, wonderfully authentic artwork were a revelation. Prior to reading that first instalment of Marvelman – eventually published in colour as Miracleman in the States – the edgiest comics I’d come across were those contained in the weekly sci-fi anthology 2000 AD. Indeed, I’d doubtless already read some of Moore’s other work in that title, without his name having properly registered.

But “A Dream of Flying” was something else. The first page of the story, showing the terrorists driving towards the nuclear plant in a lorry, remains for me the single page that paved the way to discovering a more grown-up, more nuanced style of comics storytelling. Essentially, all that first page of “A Dream of Flying” is is two blokes bantering in the cab of a truck. But more than the visual spectacle that followed, more than the bullets bouncing off Marvelman’s raised hand, moreso even than the image of him circling the Earth at the close of the episode, for me that one page opened up the possibilites of the comics form: just two men, talking rubbish, the one a bit alarmed by the other, in a manner that was all the more astonishing for how low key and… ordinary it was. 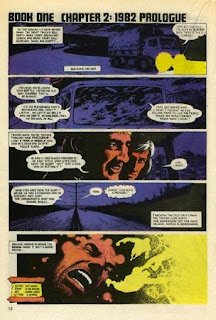 Alan Moore would go on to craft infinitely more elegant stretches of dialogue, countless sentences and scenes that, examined with an older, more critical eye, far surpass the nascent, occasionally awkward stylings of his debut episode of Marvelman. But “A Dream of Flying” – and particularly that first page – will always be special to me. Despite the fact that it was a story about a superhero, it was my gateway to comics that weren’t about superheroes – comics like Fast Fiction, or Escape, or Eightball, or such future Moore masterpieces as Swamp Thing and From Hell – and a doorway to the names behind those comics, to creators who had little to do with the superhero genre: Eddie Campbell, Dan Clowes, Chris Ware; hundreds of others. It was the story that would, in time, lead to me working in the comics and graphic novels industry myself – first at Titan Books, now at Ilex – and then eventually, inexorably, to my editing Alan Moore: Storyteller, a book of which I am immensely proud.

Whether Alan Moore: Storyteller would have appeared if I hadn’t come to work at Ilex, I really couldn’t say. (Yeah, OK Tim: it probably would have.) But what I can say for certain is that without Alan Moore and Garry Leach’s “A Dream of Flying”, I wouldn’t have ended up editing Alan Moore: Storyteller. And so in a way – at least for me – a near-thirty year circle is now…