Let's take a detour from the signed editions for the moment and return to the novels Donald E. Westlake wrote under the nom de plume Tucker Coe in the 1960s and '70s, all of which star disgraced former cop Mitchell Tobin. I reviewed the first of those, 1966's Kinds of Love, Kinds of Death, a couple of weeks ago, adding its 1967 British Souvenir Press dust jacket – designed by S. R. Boldero – to my Beautiful British Book Jacket Design of the 1950s and 1960s gallery, and I'll be doing the same with this latest Westlake Score: the scarce 1968 Souvenir Press first edition of the second Coe/Tobin book, Murder Among Children, which again features a striking Boldero cover, this time one that, to my knowledge, has never been seen online before... 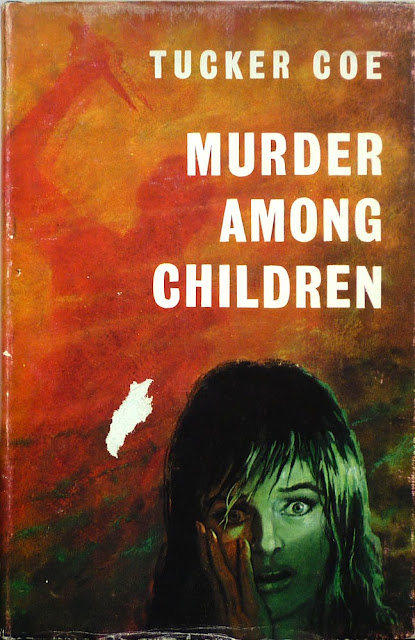 Originally published in the States by Random House in 1967, Murder Among Children finds Mitch Tobin still at a loose end, still building his symbolic-but-also-quite-concrete wall around his back yard, still unwilling to rejoin the world a year on from inadvertently causing the death of his partner and consequently getting thrown off the force. Once again it's Mitch's wife, Kate, who urges him into action, this time to assist a female cousin, Robin, whose West Village coffee house is being targeted by a corrupt policeman. But when Mitch arrives at the coffee house, he finds Robin covered in blood and clutching a knife, and a dead man and woman in a room upstairs. And so, even more reluctantly, and at the behest of another of the coffee shop's owners, a young black man named Hulmer Fass (and at the behest of Kate), Mitch agrees to look into the crime, as the bodies begin piling up... 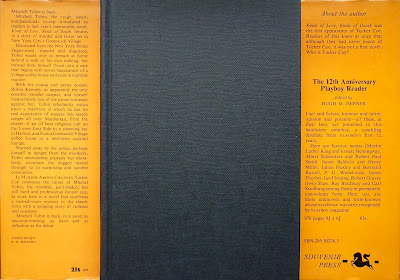 As with Kinds of Love, Kinds of Death, one of the chief draws of Murder Among Children is the selection of interesting characters Westlake populates the story with. Hulmer Fass especially I found an agreeable companion – smart, witty and hip – as indeed does Mitch, for whom Hulmer becomes a kind of unofficial sidekick. And of course Mitch himself is as intriguing as before; although he does less soul-searching than in the first book, his powers of observation are as acute as ever, except coloured by his own situation and, let's face it, depression. At one point he watches Hulmer walking away down the street...

...youthful, optimistic, humorous, bouncing on the balls of his feet, I found myself envying him in half a dozen different ways. I envied his youth, of course, and his optimism, and his humor, and I envied the absence of scars on his psyche that made the youth and optimism and humor possible. But beyond that I envied him for being young now, and black, and alive to the world in a way that I had not been for years, in a way that I perhaps had never been in my life.

That sense of the now (or rather the then-now) is evident throughout the book. Westlake paints a vivid picture of a New York sweltering under a summer heatwave: shirts drenched with sweat; the cooling relief of air conditioning. And there's an escalating tension, too, as Mitch has a brush with death on a tenement stairwell, and then towards the close of the novel becomes a suspect for the murders himself. In the end, he's offered an olive branch by a police captain, along with a glimmer of hope of a wiping clean of his slate, and even, perhaps, a return to his former life as a cop. But Mitch knows that's a delusion, and as in Kinds of Love, Kinds of Death, all he wants to do at the finish is get back to building his wall. 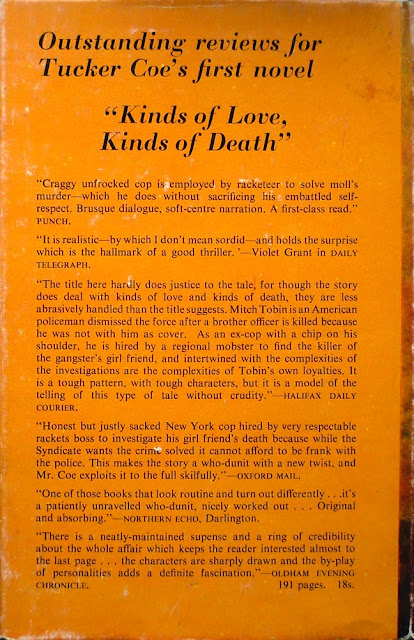 The back cover of the Souvenir Press edition of Murder Among Children carries British reviews of Kinds of Love, Kinds of Death, the fourth one down of which caught my eye. It's credited to the Oxford Mail, which means it's almost certainly by spy novelist Anthony Price, who, as he explained in the interview I conducted with him last year, was reviewing crime fiction for the Mail around this period. It's nice to find that an author for whom I have a great deal of respect enjoyed Westlake's work – even if he probably didn't know it was by Westlake – and makes me wonder if Price reviewed any others of Westlake's novels. And oddly enough, after Murder Among Children, in the 1970s the remaining three Mitch Tobin novels would be published in the UK by Gollancz – the same publisher that was home to Price's David Audley novels in the '70s and '80s.

S. R. Boldero's dust jacket for Murder Among Children has now joined his other wrappers in the Beautiful British Book Jacket Design of the 1950s and 1960s gallery – and I've another, lovelier Westlake wrapper waiting in the wings, this time from an earlier novel, penned under Westlake's own name, and which to my mind is one of the best things he ever wrote. Look out for that – and an attendant review – next week. Next though: it's back to the signed editions, with another graphic novel published this very year...
Posted by Nick Jones (Louis XIV, the Sun King) at 05:40