In the wake of yesterday's signed copy of British cartoonist Tom Gauld's graphic novel Goliath, let's take another short break from the signed editions to spend a moment or three on Gauld's debut self-published comic, presented as part of my intermittent Notes from the Small Press series: 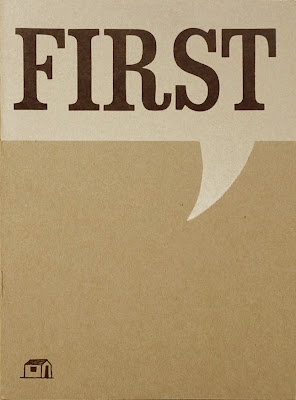 First was Gauld and fellow cartoonist Simone Lia's first foray into the world of small press comics, published under their own Cabanon Press imprint in 2001. At the time, the two friends were still studying at the Royal College of Art in London, and both have gone on to bigger things – Gauld with his regular work for The Guardian newspaper and books for Buenaventura Press and Drawn & Quarterly, Lia with the graphic novels Fluffy and Please God! Find Me a Husband for Jonathan Cape. But First was the, well, first glimpse of their particular, peculiar talents, and as such proved instructive as to what was to come.

Lia's main contribution to First is an eight-page story (untitled, like all the stories in the comic) about a woman who develops "road leg" – basically her left leg turns into a road – featuring a walk-on cameo by a talking table lamp who appears earlier in the comic. It's as odd as it sounds, but infused with a wiggly charm which would serve her well in the later Fluffy. Other than that, her remaining pages are all single illustrations, snapshots from what look to be longer works, although ones which possibly only exist in her imagination. Gauld's strips alternate between the goings-on at a remote castle keep – these would become the comic Guardians of the Kingdom later in 2001 – and the adventures – or lack thereof – of two astronauts travelling to the Moon. His signature style is already firmly established even at this early stage in his career: fantastical situations punctured by mundane banter and punctuated by stretches of stillness.

As beguling as Gauld and Lia's cartoons in First are, however, what really made the thing stand out from the majority of British small press comics of the era – at least for me – were its production values. Professionally printed and bound in a minimalist rough card cover, First was a cut above much of the photocopied mini-comix fare to be found on the shelves of London's Gosh Comics (which is where I'm pretty sure I bought my copy) – a comic that was clearly, and correctly, pleased with and proud of itself. In a way, the blunt anti-humour of Gauld's strips in particular, but also Lia's to a degree, were quite at odds with the look feel of the comic overall. A comic as well-produced as this would typically be published by Americans, its interiors containing the kind of opaque art comix seen in, say, Kramers Ergot (which Gauld would in fact begin contributing to as of the 2005 fifth volume, sticking out – in a good way – like a sore thumb).

If anything, however, Gauld and Lia probably owe more to British daily newspaper strips and cartoons (and maybe American ones; Gary Larson springs to mind in Gauld's case), or perhaps even scabrous humour title Viz, than they do to alt. or art comix. Theirs is a sensibility more in tune with Monty Python's Flying Circus or Spike Milligan: gags that aren't really gags; jokes whose punchlines never come. In other words, very silly, and very, very British.

First was followed, surprisingly enough, by Second in 2002, the two comics then being collected by Bloomsbury in 2003 as – wait for it – Both. Gauld and Lia continued pumping out fun little mini-comix through Cabanon Press over the following eight years, although latterly other commitments have meant that Cabanon has gone on hiatus. But First provides a peek at two talented cartoonists at a formative stage in their career, and over a decade on from publication still stands as an intriguing and rewarding comic in its own right. 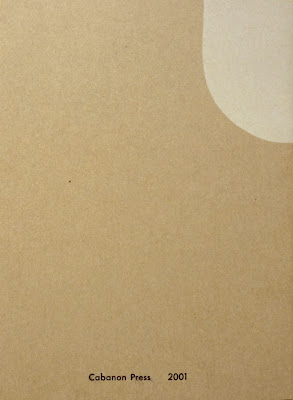 It's back to the signed editions next on Existential Ennui, with a political autobiography that was actually given to me by a friend, plus a selection of signed fiction...

Notes from the Small Press 12: The Sky in Stereo by Mardou
Posted by Nick Jones (Louis XIV, the Sun King) at 04:18