Before we get into those promised signed editions – and let me tell you I have all manner of intriguing signed books lined up, from non-fiction to fiction to graphic novels – I thought I'd take the opportunity to add some more covers to the Beautiful British Book Jacket Design of the 1950s and 1960s gallery. Almost all of the books in this batch were bought either in or near Lewes, with the exception of a lovely Val Biro wrapper, which was scanned and sent to me by Mike Ripley, who, you'll no doubt recall, kindly supplied a number of other splendid book jackets back in April.

Let's take a look at my most recent acquisition first: 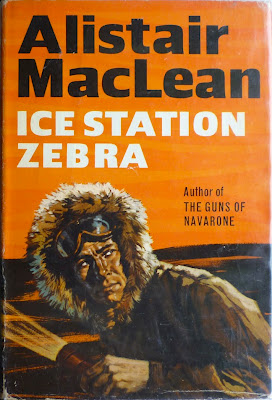 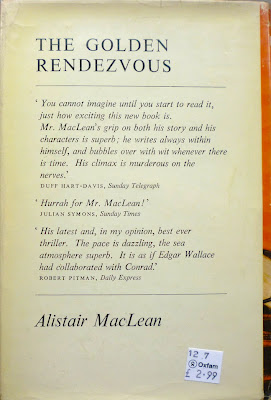 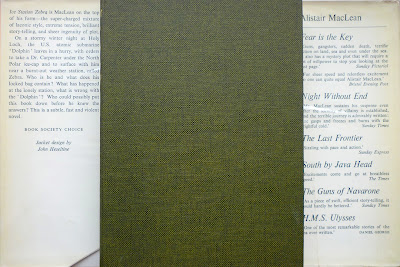 A 1963 Collins hardback first edition/first impression of Alistair MacLean's Ice Station Zebra, which I found in the Lewes branch of Oxfam just the other day (note price sticker still affixed to back). I wrote about MacLean over three weeks ago, when I posted the first missive in my just-completed series on books which begat perhaps more famous films – that post being on Where Eagles Dare, the Ian Robertson-designed wrapper of which has also now joined the Beautiful British Book Jacket gallery. Ice Station Zebra was itself turned into a film – which I don't believe I've seen – directed by John Sturges, who himself cropped up at the end of the books-which-begat-perhaps-more-famous-films series in relation to The Eagle Has Landed (and who, as I mentioned then, also directed one of my favourite-ever films, Hour of the Gun). The jacket of the Collins edition was designed by John Heseltine, an artist and illustrator known for his royal portraits.

Then there's this book, which I came across in one of Lewes' many and varied antique shops: 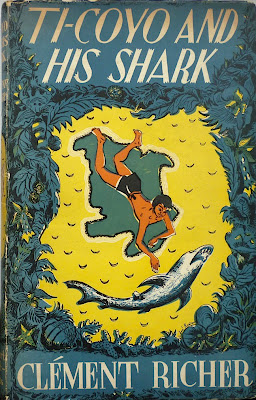 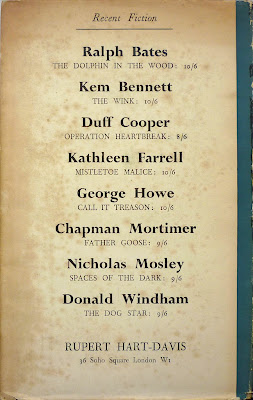 Ti-Coyo and His Shark, by French writer Clement Richer, published by Rupert Hart-Davis in 1951. The jacket on this one was designed by Evadne Rowan, who also illustrated wrappers for James Leasor's The Monday Story and Nikolay Gogol's Dead Souls, among many other books. I haven't read Ti-Coyo yet, and I may not even keep it, but I liked the cover enough to put down a couple of quid so I could add it to the Beautiful British Book Jackets. There's a review of the novella on the Time Magazine site, the full version of which I can't access because I'm not a subscriber, but handily this copy of the book came with its own contemporaneous review enclosed, clipped from The Times: 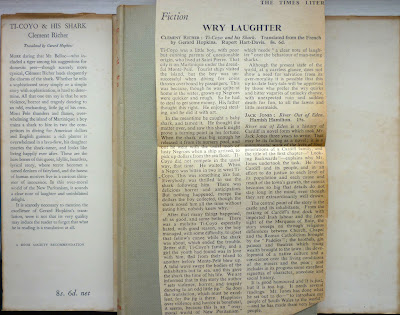 I've also added to the gallery two dust jackets for Graham Greene novels: Lacey Everett's wrapper for the 1961 Heinemann first of A Burnt-Out Case – rephotographed from its original appearance as a Lewes Book Fair find back in January of last year – and the wrapper of the 1955 Heinemann first of The Quiet American, also rephotographed from its original appearance as a Lewes Bookshop Bargain in March of last year. The jacket design of the latter is uncredited, but it bears the signature BGS at bottom right of the front cover; I've not been able to determine who that is, so I've placed the wrapper with the designers whose surnames begin with "S", on the assumption that the "S" denotes a surname (if you know who BGS is/was, do please leave a comment). And of course there's this, courtesy of Mike Ripley: 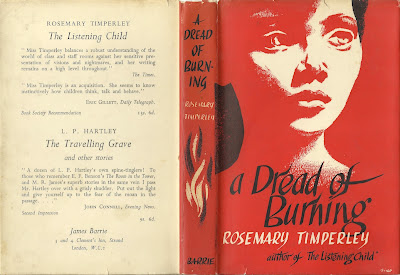 Val Biro's exquisite wrapper for Rosemary Timperley's A Dread of Burning, published by James Barrie in 1956. Timperley's debut novel, this is really rather a scarce book: there's currently only one copy on AbeBooks, and that's lacking its dust jacket.

All of those, plus the S. R. Boldero jacket for Donald E. "Tucker Coe" Westlake's Kinds of Love, Kinds of Death that I added on Monday, bring the total number of covers on the page up to 80. And there are plenty more to come, both from Val Biro, from Westlake (two very nice, little-seen wrappers from his books), and from others besides. Before those, though, let's get stuck into the signed editions, with a book in which I personally had a hand, and which has just been nominated for a Harvey Award...
Posted by Nick Jones (Louis XIV, the Sun King) at 06:53