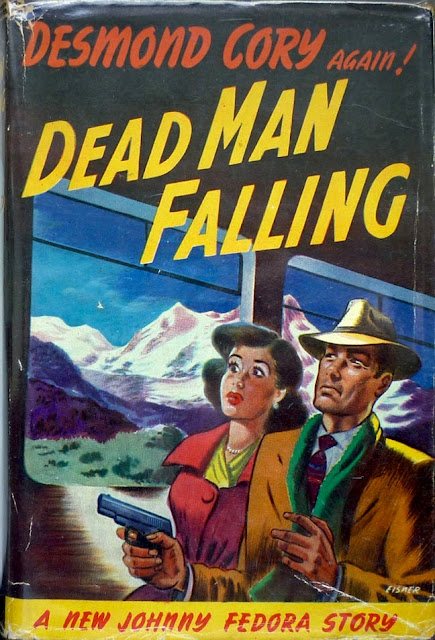 Published in hardback in the UK by Frederick Muller in 1953 – the same year as another, rather more famous fictional secret agent, Ian Fleming's James Bond, made his literary debut (in Casino Royale, as if you didn't know) – Dead Man Falling is the third Johnny Fedora adventure (and the fifth Cory novel overall), following 1951's Secret Ministry and 1952's This Traitor, Death. The story sees Johnny venturing to the mountains of Austria on the trail of Hitler's personal bodyguard, Karl Mayer, "seeking for the missing Von Huysen diamonds" – which is why the novel picked up the alternative title of The Hitler Diamonds for its 1969 US Award paperback printing. 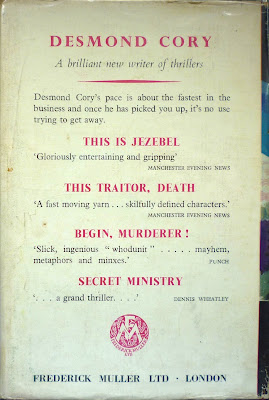 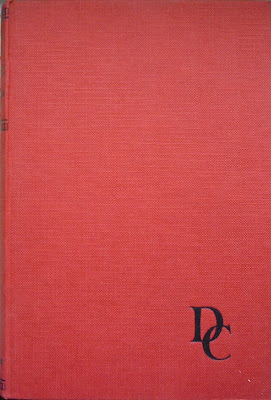 As with all of Cory's 1950s/early-1960s novels, Dead Man Falling is hard to come by in any edition (save the recently issued ebook edition, that is): there are currently only three copies of The Hitler Diamonds available on AbeBooks, all from American sellers, and one copy of the Muller hardback of Dead Man Falling, although that's sans-dustjacket, and the seller's based in New Zealand. Which, oddly enough, is where my copy came from: namely Gaslight Collectables in Burra, which looks like a charming shop to visit – or indeed to buy, as it's apparently up for sale. Hmm... I wonder if they have any other first editions that'll be of interest to me...?

There's no credit for the splendid dustjacket illustration – which will shortly be joining my Beautiful British Book Jacket Design of the 1950s and 1960s gallery – but there is a signature at bottom right: Eisner. That's not, however, and before you go getting too excited (as I did, briefly), comics legend Will Eisner, but rather one A. H. Eisner, about whom I've been able to determine little in the way of biographical information, but a small amount of bibliographic detail: he illustrated jackets for, among others, Ursula Bloom's No Lady in the Cart (Convoy, 1949) and Chester Himes's Lonely Crusade (Falcon Press, 1950) and did interior illustrations for Ethel Mannin's So Tiberius (Jarrolds, 1954) and Florence Hightower's Dark Horse of Woodfield (Macdonald, 1964/Puffin, 1973). Judging by the style I'm guessing that Eisner also designed the attractive front endpaper map in Dead Man Falling: The author blurb on the jacket back flap offers some intriguing insights regarding Desmond Cory: that he "lives in a welter of books, gramophone records and typewritten manuscripts, and claims that his stories are as untidy as he himself" – something I touched on in my review of the later Johnny Fedora novel, Undertow (1962) – and that "he composes straight on to the typewriter" and that, ghoulishly, "he really is very fond of blood". Meanwhile, over on Amazon, Jan Heart's Customer Review of Dead Man Falling notes Cory's "marvellous writing style" and the novel's "ingenious plot", and reveals that Jan decided to try the book as a result of seeing Undertow in a top ten books of 2011 list, as compiled by "influential critic of thriller novels... Existential Ennuie" (sic). Ah, the awesome power of influence I wielde (sic)... 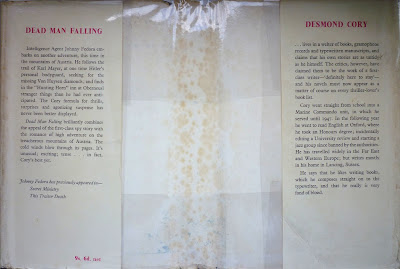 Moving on, and next in this series of posts I'll be showcasing the final Johnny Fedora novel to be published in the 1950s – the fourth book in a quartet of similarly titled works which sent Johnny to every point of the compass...