On to the second of three first editions of Desmond Cory's Johnny Fedora spy novels I've purchased in recent months. And while this one isn't quite as uncommon as Dead Man Falling, it's tough to find a first edition which isn't ex-library... 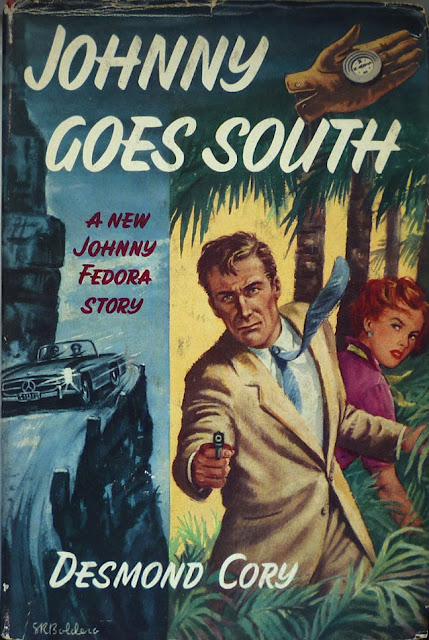 Johnny Goes South was first published in hardback in the UK by Frederick Muller in 1959, under a dustjacket designed by S. R. Boldero. Now, for a change, I don't need to do any digging on the jacket designer, because that redoubtable researcher of books-related stuff Steve Holland has a thorough biography of Stephen Richard Boldero over at Bear Alley, including a nice selection of the covers Boldero painted for the likes of Corgi, Pan and Pedigree. I will add, however, that, closer to the concerns of Existential Ennui, Boldero also designed the dustjacket for the Souvenir Press edition of Kinds of Love, Kinds of Death by Tucker Coe, alias Donald E. Westlake (as Steve notes, Boldero had a long association with Souvenir Press, among other assignments designing the wrapper for Peter O'Donnell's 1971 Modesty Blaise novel The Impossible Virgin), and that his jacket for Johnny Goes South will of course be making its way into my Beautiful British Book Jacket Design of the 1950s and 1960s gallery when I'm done with these Desmond Cory posts. 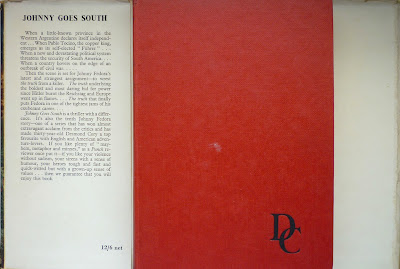 The story this time finds Johnny Fedora, freelance operator-cum-assassin for British Intelligence, in the province of Amburu on the Argentine/Chilean border. Amburu has declared independence from Argentina, and Johnny is called on to ensure the survival of the rival to the self-declared "Fuhrer" of Amburu, copper king Pablo Tocino. There's an instructive review of Johnny Goes South over on the A. V. Club, in which Keith Phipps dwells at length on the pacing – or lack thereof – of the novel, a common complaint with Cory's Fedora books, and something I addressed in my review of the twelfth Fedora adventure, Undertow (1962). But unlike other reviewers, Phipps gets that Cory wasn't "concerned about pacing at all", and admits that the novel is "gripping in its own way". 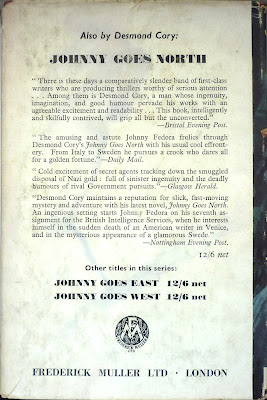 As well as being the tenth Johnny Fedora outing, Johnny Goes South is the fourth book in a quartet of similarly titled works beginning with 1956's Johnny Goes North, all of which, in their Muller editions, sport a gloved hand holding a compass on the cover. 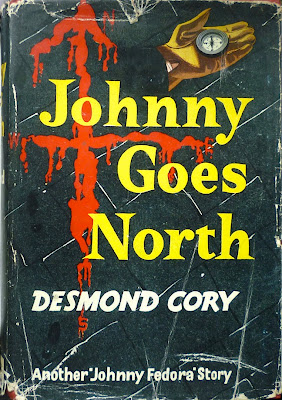 But there's also a link to the aforementioned Undertow, in that in Johnny Goes South, Johnny hooks up with Tocino's daughter, Adriana, and it's at Adriana's Spanish villa that he's staying (with Sebastian Trout) in Undertow.

There are fifteen copies of Johnny Goes South on AbeBooks at present, but only three of those are the Muller edition, and all three are ex-library. Mine was an inexpensive eBay win, which, considering firsts of the Fedoras don't come up on eBay that often, was a nice piece of luck. But the final Johnny Fedora first edition I'll be showcasing was an even luckier find, and even more gratifying, as it's perhaps the best of all the Fedora novels...
Posted by Nick Jones (Louis XIV, the Sun King) at 04:56