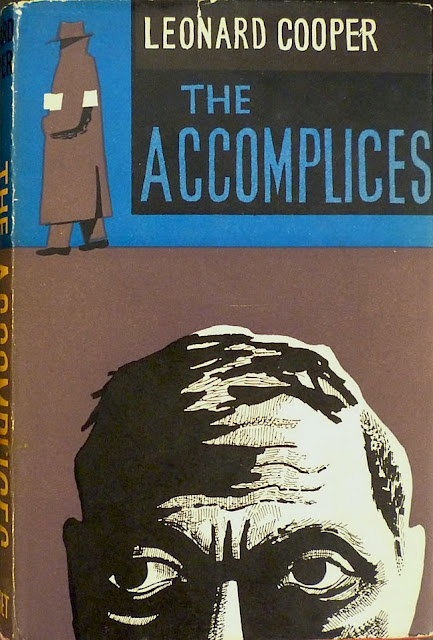 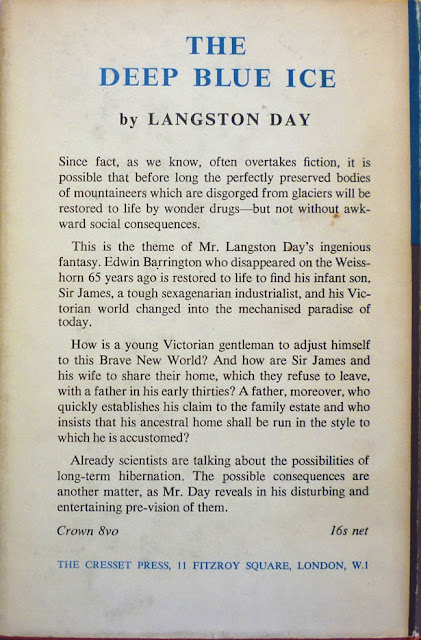 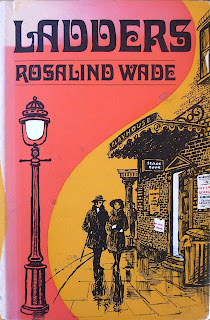 Yes, having added three Desmond Cory dustjackets to Beautiful British Book Jacket Design of the 1950s and 1960s yesterday – the Johnny Fedora spy novels Dead Man Falling, Johnny Goes South and Undertow – I've now added a couple more wrappers, to bring the total up to 55. Both of those books are by authors who are largely overlooked these days: Rosalind Wade, who I wrote about back in 2010 (besides being an author herself she was the mother of thriller writer Gerald Seymour) when I found a signed first of her very scarce 1968 novel Ladders – the Val Biro-designed wrapper of which (rephotographed from its original appearance) you can see on the right – in a Lewes charity shop; and Leonard Cooper, the 1960 Cresset Press first edition of whose espionage novel The Accomplices can be seen above.

Cooper is remembered chiefly for his non-fiction these days – Kirkus have reviews up of two of his historical works, The Age of Wellington (Dodd, 1963/Macmillan, 1964) and Many Roads to Moscow (Hamish Hamilton/Coward McCann, 1968) – but he did write fiction besides, and The Accomplices is the second of only two mystery/suspense he wrote. I bought this copy – for £6, which struck me as a bargain, given that the only other copy currently available in the UK is going for £15 (the Cresset edition is the only printing of the book) – in Slightly Foxed on Gloucester Road (where I also bought Graham Lord's biography of Jeffrey Bernard). The fact that it's a spy novel obviously influenced my decision to buy it, and it also came with a little piece of publishing paraphernalia enclosed: 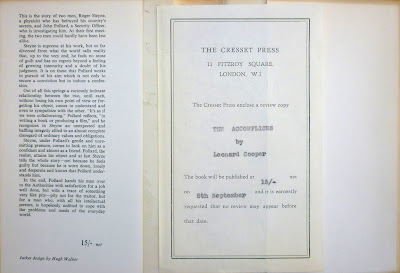 A review slip, which is precisely the kind of useless ephemera I always find fascinating. But it was the Hugh Walker-designed dustjacket that really caught my eye – a lovely example of that restricted-palette/high contrast/hand-cut-lettered style so prevalent in the '50s and '60s – see also Peter Rudland's wrapper for Anne Chamberlain's The Tall Dark Man, which I picked up in Slightly Foxed on the same visit, not to mention many others in the Beautiful British Book Jacket Design gallery.

And there'll be yet more beautiful book jackets joining the gallery next week – most likely a handful of covers wrapping first editions of P. M. Hubbard suspense novels, two of which have never been seen online before. Although, having said that, I'm off to see a book dealer acquaintance of mine at the weekend, so my plans may change...
Posted by Nick Jones (Louis XIV, the Sun King) at 07:29