The Stone Roses by Sarah Gainham: the Inspiration for the Manchester Band's Name? (Eyre & Spottiswoode, 1959)

This final Sarah Gainham spy novel I'm showcasing was again recommended to me by spy novelist and espionage aficionado Jeremy Duns. But our tweeted conversation about it largely centred on the influence it had on a legendary – and recently reformed – Manchester band dear to both our hearts rather than on the novel itself... 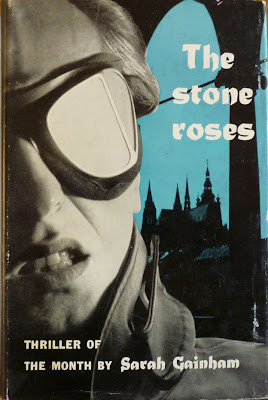 The Stone Roses was first published in hardback in the UK by Eyre & Spottiswoode in 1958, under a striking photographic dustjacket by Christopher Macartney-Filgate, who may, or may not, be related to the filmmaker Terence-Macartney-Filgate (now that's what I call in-depth, detailed research). Set in Prague in 1948 (most, if not all, of Sarah Gainham's early thrillers are set in the past), shortly after the Communist Party coup d'état, the novel is narrated by Toby Elyat, a journalist who is sent to Czechoslovakia to cover the rigged May elections. But Toby has a parallel mission: to find the missing brother of a beautiful female Czech specialist in English affairs – a mission which will see him tangle with the Russian MVD... 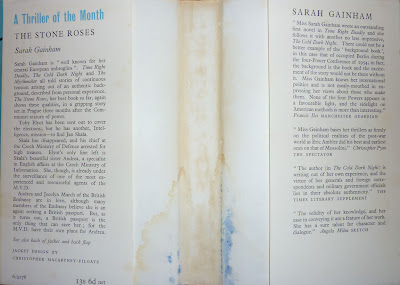 Copies of the first edition of The Stone Roses are fairly thin on the ground; AbeBooks currently has around twenty copies of the novel listed for sale, but only five of those are the Eyre & Spottiswoode first, ranging in price from £12 to £20. Frankly, I'm surprised there are that many, because for fans a certain iconic late-1980s/early 1990s Manchester band, The Stone Roses boasts a special significance.

Legend has it that John Squire, guitarist and co-songwriter in – of course – The Stone Roses, decided to name his band after Sarah Gainham's fourth novel after either seeing a copy on his mum's bookshelf or finding a battered paperback himself. Now, that may, of course, be complete bollocks – there are at least two other rumoured origins of the band's name floating around out there – but Squire being a cultured, artistic sort, and in the absence of a firm denial either from him or from fellow bandmembers Ian Brown, Mani or Reni, it strikes me as an entirely plausible explanation for their name.

But why, you may be wondering, should all this be of interest to me (or indeed to Jeremy Duns, who made me aware of the Roses connection and got me interested in Gainham in the first place)? Well, I was – still am, I suppose; I'm certainly intrigued by the prospect of new material from them now they've reformed – a huge Stone Roses fan (as, I believe, is Jeremy). I was a student in Manchester during the Roses' – and the Happy Mondays, and the Inspiral Carpets (who, it seems, have also reformed, and with their original singer, no less) and the rest – heyday, from 1989 to 1992, making the pilgrimage to the Hacienda every week, seeing all the leading lights live at various venues (G-Mex for the Mondays, the International 2 for the Inspirals, the Uni for The Charlatans...). I was at Spike Island, the near-mythical Stone Roses gig near Widnes, and me and a mate once even followed vocalist Ian Brown when we happened to see him on a Manchester street. (He went to the bank, and then into someone's flat. Brilliant.) So if Sarah Gainham's The Stone Roses really was the inspiration for the band's name, then to own a first edition of it is, to a Roses enthusiast such as myself, a fine thing indeed. 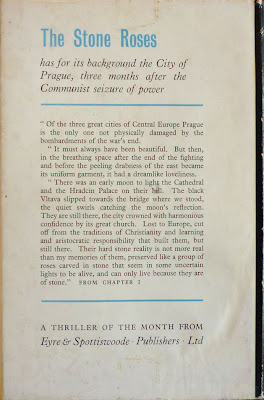 Anyway, that's it for Sarah Gainham for the moment... but that's for from it for the spy fiction. Because quite soon it'll be spy fiction (almost) all the way on Existential Ennui, as I embark on a series of series of posts on... well, various spy series. The identities of the authors of those novels shall remain, for the moment, and appropriately, given the subject matter, a secret, but I can reveal some other surnames you'll be encountering before too long; names such as Behrens, Calder, Christopher, Drake, Durell, Fedora, Helm, Rees, Russell, Wilde, and, er, "anonymous".

Alongside all that there will of course be the usual scattering of Violent World of Parker cross-posts, the first of which, a review of Richard Stark's Lemons Never Lie, will, likely as not, turn up ahead of the spy fiction. And there may even be a post – or possible even two posts – before that, depending on what the weekend brings. I'm assisting me mum with her inaugural Beckenham Book Fair on Saturday, at the Elm Road Baptist Church (opens 10.30am), so that may be worth a missive, and on Sunday I'm planning on attending the London Royal National Hotel and Holiday Inn Book Fairs – the two biggest such events in the country – for the first time, so again, if that proves fruitful, I may sling up a post. We shall see...
Posted by Nick Jones (Louis XIV, the Sun King) at 07:22