The Spy Thrillers of Sarah Gainham: an Introduction to the Author and a Bibliography

For the remainder of the week on Existential Ennui I'll be blogging about Sarah Gainham (1915–1999), a British author who had thirteen novels published between 1956 and 1983 – all of which, I believe, have fallen out of print. The most famous of those is probably 1967's Night Falls on the City, a bestselling account of life among theatre folk in Austria during the Nazi years, the first of a trilogy also comprising A Place in the Country (1968) and Private Worlds (1971). By and large her novels are concerned with central European cities and the people who dwell in them, especially Vienna, where she lived from 1947. 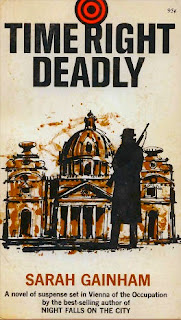 So far, so unremarkable, at least as regards Existential Ennui, the established remit of this blog being, for the most part, works of genre. But Sarah Gainham did, in fact, begin her career writing genre fiction. Her initial five novels from 1956's Time Right Deadly to 1960's The Silent Hostage are all, ostensibly, suspense and spy thrillers, and it's those books that I'll be concentrating on this week, in particular three consecutive works which are all of an espionage bent.

As has been the case previously, Gainham came to my attention courtesy of spy novelist, espionage aficionado, and friend of Existential Ennui, Jeremy Duns, who mentioned her during a tweeted conversation earlier this year. Jeremy informed me that Gainham – real name Rachel Terry-Ames nee Stainer, "Sarah Gainham" being a nom de plume taken from her maternal great-grandmother – was for a time married to the investigative journalist Antony Terry, a friend and colleague of James Bond creator Ian Fleming (Fleming hired Terry to The Sunday Times, where Fleming was Foreign Manager, in 1949). According to Jeremy it was Gainham who drew Fleming's attention to the Soviet agent Emma Wolff, the basis – along with two other female Soviet operatives – for the memorable From Russia, with Love character Rosa Klebb. (The estimable Mr. Duns explains all in this post on his essential blog The Debrief.) Quite apart from her genre connections, however, Gainham was an interesting individual in her own right. Born in Islington, north London, in 1915 (although she claimed she was born in 1922), like many of the characters in her books Gainham became a journalist, writing for The Economist, Atlantic Monthly and The Spectator, where she was Central and Eastern European Correspondent. But she was also, Jeremy Duns recently revealed to me, employed by MI6 – as was Antony Terry, for whom Gainham researched a document – commissioned by Ian Fleming – titled "East-West Routes for Agents", on how to gain access to West Berlin from East; see Berlin to Bond and Beyond (2007) by Terry's stepdaughter, Judith Lenart, for more.

Gainham's first stint in Vienna – initially working with the Four Power Commission – informed the writing of her third novel, The Mythmaker, which, although published in 1957, is set in 1947 Vienna. In his 1977 survey Who's Who in Spy Fiction, Donald McCormick quotes Gainham as saying, "When I arrived in Vienna I was, like nearly all English people at that time, pronouncedly pro-Russian, as well as being young, ignorant and self-opinionated. It was the Russians who cured me in about six weeks." (In her at-the-time private correspondence to McCormick, Gainham again confirmed hers and Terry's MI6 connections, stating, "Certainly I did have links with intelligence – what do you think Antony has been doing all these years?") Gainham's negative view of the Soviets may well have been shaped, too, by her first-hand experience of the 1956 Hungarian Uprising – a sentiment shared by Kingsley Amis and Anthony Price. 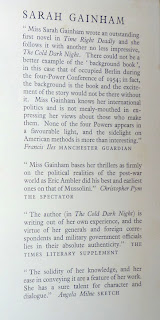 Gainham told McCormick that she "always wished I had taken a man's name for my pseudonym", presumably to deflect attention from her being a female thriller writer, as opposed to the much more common male variety. That doesn't seem to have had the desired effect; in a manner one suspects would not have been the case with a male equivalent, Jonathan Ray and Robert Elphick's obituary of the author in The Independent lingers on titillating details of her sexuality, noting pruriently and – without wishing to sound prudish on my part – perhaps gratuitously: "Gainham had immense sex appeal, was highly flirtatious – skittish, even – and well aware of the appeal that she had for the opposite sex. She once remarked in late middle age: 'I know that I am no great looker, but I've always had a magnificent pair of tits.' Indeed, until well into her eighties she would wear dresses with heroically plunging necklines." 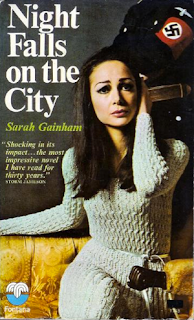 The success of Night Falls on the City – it nested in the New York Times bestseller list for months – brought Gainham financial security, but her private life was less than ideal. In 1964, following the breakdown of her marriage to Terry, Gainham married again, this time to Kenneth Ames of The Economist, claiming – again as reported by Ray and Elphick – that she had wed Ames so as to not have to spend her dotage on her own. But when Ames committed suicide in 1975, and having had no children in either of her marriages, that was precisely the fate that befell her. "Attended by a succession of grossly over-indulged cats," wrote Ray and Elphick, "she became in her later years reclusive and somewhat eccentric, in stark contrast to her gregarious and sociable former self." Having left Britain in 1947, Gainham never returned to live in the land of her birth – as well as Vienna she also resided in Berlin, Bonn and Trieste – and for fifty years until her death, she remained in – reciprocated, but unattainable – love with another, unshakably married man.

However, her celebrated literary career soared where her private life suffered. She was elected a Fellow of the Royal Society of Literature in 1984, and for crime, suspense and spy fiction enthusiasts there's a lot to like about her initial five books (and also, quite possibly, Night Falls on the City). "I had a special feeling for using the thriller as a vehicle for ideas, or rather propaganda," she told McCormick for Who's Who in Spy Fiction. "I always used them as anti-Russian propaganda. All the best spy thrillers whose origins are known seem to be based on reality. Certainly my own stories were: they are not really fiction at all, only written as fiction."

That's readily apparent in the Sarah Gainham novel I'll be reviewing in the next post: a convincingly grubby tale of low level espionage in 1950s Berlin... 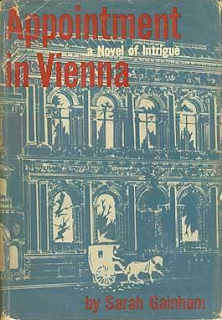