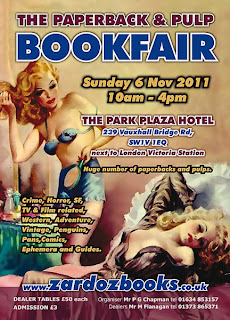 Just a quick one before we get stuck in – er, so to speak – to that female British spy fiction author I promised on Friday, because I forgot to mention that the annual Paperback & Pulp Bookfair was being held today up at the Park Plaza Hotel in London. Longtime Existential Ennui readers – yes, I'm looking at you two again – may recall my having dedicated a series of posts last November to the wares I procured at the previous Bookfair, which took place at the end of October 2010, and I'm pleased to report that this year's event, which I trekked up to this morning from a still-smoky-smelling Lewes (5 November is kind of a big deal round my manor...), was even better. That may, in fact, have had more to do with my being slightly better informed re matters criminal and espionage-al – fictionally speaking – than I was a year ago, but certainly the room the Bookfair was in at the Plaza was bigger this year, and even more certainly I came away with quadruple (at least) the books I did last time out, and of a higher calibre, too.

Those books – both paperbacks and hardbacks – will be filtering on to Existential Ennui over the coming months, but as a sneak preview, I thought I'd offer a glimpse of the ill-gotten gains to prove just how profitable the 2011 Paperback & Pulp Bookfair was – both for myself and for the dealers who got my cash: 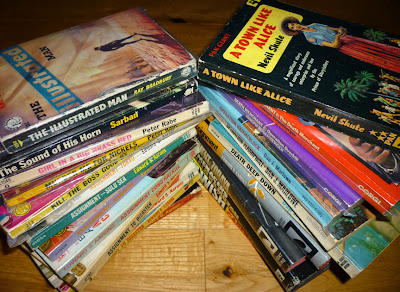 Feast your eyes on that little lot, my friends. Quite the haul, huh? My, but we've got some fine books blogging ahead of us, I can tell you. That's for the future, however. Next up on Existential Ennui... it's back to the British spy fiction...
Posted by Nick Jones (Louis XIV, the Sun King) at 12:51