Continuing this run of posts on the spy novels of British author Sarah Gainham, next we turn to her third work of espionage fiction: 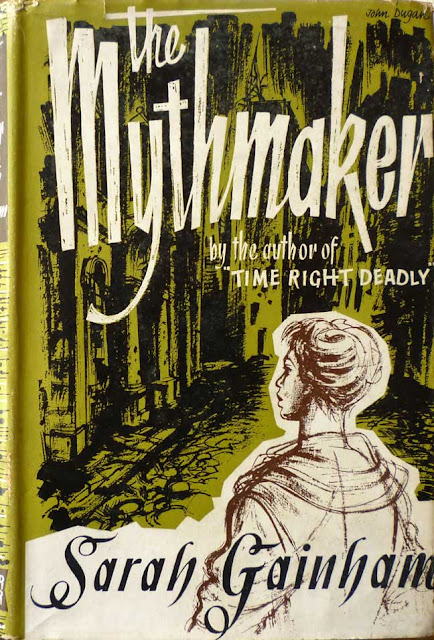 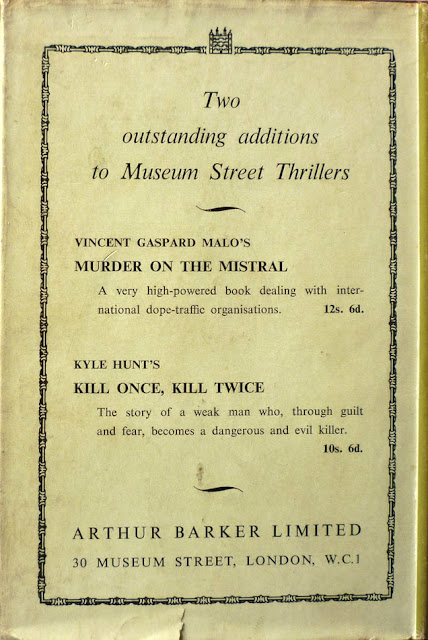 The Mythmaker was first published in hardback in the UK in 1957 by Arthur Barker, under the kind of splendid, restricted-palette, hand-cut-lettered and illustrated dustjacket which was prevalent in British book publishing in the 1950s and '60s, but which has since sadly slipped out of fashion (with the odd exception, such as the book covers designed by Lewes' very own Neil Gower) – see these posts on other examples by largely (and unjustly) overlooked illustrators like Donald Green, John Rowland, Roy Sanford and Peter Probyn. The artist in the case of The Mythmakers is the similarly neglected John Dugan, whose illustrations appeared on a number of Barker covers in the 1950s, among them an edition of Defoe's Moll Flanders, as well as featuring in various Enid Blyton books. 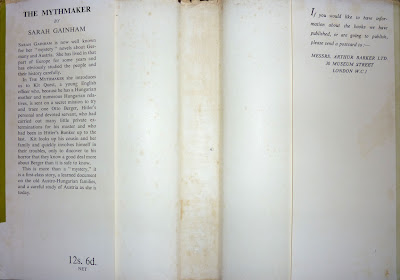 AbeBooks currently has eight copies of The Mythmaker listed for sale worldwide, six of those being the Barker first edition, ranging from a few quid to around £20, so it's certainly more attainable than firsts of her preceding novel, The Cold Dark Night, of which AbeBooks has just two at present. As I mentioned in my initial Sarah Gainham post on Tuesday, The Mythmaker, which is set in 1947 and for the most part in Vienna, was inspired by Gainham's own experiences in that city at that time. The story centres on Kit Quest, a young English officer who's dispatched on a mission to Austria to trace Otto Berger, Hitler's (fictional, I believe) personal servant, but as with The Cold Dark Night, the book is as much a picture of the city and the time in which it's set as it is a spy story – perhaps more so.

Gainham said of her novels, "they are not really fiction at all, only written as fiction", and in the shape of Kit we have a protagonist who, according to contemporary spy novelist Jeremy Duns, "is a thinly disguised portrait of Ian Fleming". Gainham knew the creator of James Bond well – very well, in fact; reportedly he attempted to seduce her – and Jeremy maintains that The Mythmaker – which is one of two Gainham novels Mr. Duns recommended to me – is also "a comment on Bond" and "one of a handful of thrillers to be influenced by and comment on Fleming before the [Bond] films."

Which brings me to the third and final Sarah Gainham work I'll be looking at, which was the other one of her novels Jeremy Duns recommended, and which was, in a way, an influence itself, this time on an unlikely beneficiary: an iconic – and particular favourite of mine – British rock band who've very recently reformed...
Posted by Nick Jones (Louis XIV, the Sun King) at 05:58