After yesterday's introduction to British author Sarah Gainham, let's turn to the first of three of her spy novels I'll be examining this week: 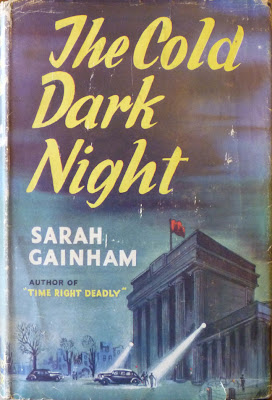 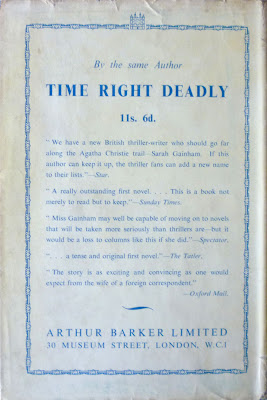 The Cold Dark Night was first published in hardback in the UK by Arthur Barker in 1957, under a wonderfully evocative but sadly uncredited illustrated dustjacket (there's a partial signature on the bottom right corner of the cover, but the jacket is damaged and I can't quite make it out). The author's second novel following 1956's Time Right Deadly, it's based on Gainham's own experiences as a journalist in Berlin in 1954 – which is where and when the story is set – covering the Conference of Four Powers.

In his 1977 survey Who's Who in Spy Fiction, Donald McCormick quotes Gainham as saying, "All the best spy thrillers whose origins are known seem to be based on reality. Certainly my own stories were: they are not really fiction at all, only written as fiction." That close adherence to at least a form of reality is evident in The Cold Dark Night, which is narrated in the first person by Joe Purdey, a young American journalist recently arrived in Berlin to cover the conference for the World. Purdey becomes involved with Gisela Schill, an East Zone emigre whose husband, Horst, returned to the east at the behest of a Western Intelligence handler, and is now missing. Gradually, a complex tapestry of subterfuge, corruption and desperation – involving sundry journos, various military types and a scattering of shady secret agents, not to mention innocent and not-so-innocent bystanders – unfurls, as the murder of a journalistic colleague of Purdey's leads to a showdown between Russian and British forces at the abandoned Anhalter Bahnhof railway terminus straddling west and east zones. 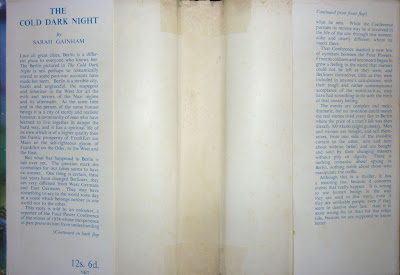 The Cold Dark Night is illuminating on the low-level espionage which was endemic in 1950s Berlin. The secret services of the various Western powers routinely used emigres as their front-line troops, sending them into the East Zone on trifling but dangerous missions, from which the hapless amateur agents were, often as not, destined never to return. This was a grubby sort of spying at the sharp end of the increasingly frosty Cold War, and The Cold Dark Night portrays it in what feels like an authentic fashion – especially when you take into account the fact that Gainham was herself both a journalist and a spy, and therefore perfectly placed to observe – and probably participate in – these activities.

In a way, the novel is a spy story by default; there are no James Bonds or George Smileys, merely a collection of wretched refugees whose motivations for spying range from the financial to the fraternal rather than out of any duty to king and country. Gainham is interested in people, with all their human foibles and failings, whether they be journalists – the main players here – regular city denizens, or the administrative military personnel who control Berlin; indeed, the cast of The Cold Dark Night is so extensive that at times it's tough keeping tabs on who's who. But Gainham is also interested in Berlin as a place – she lived there herself – and paints a compelling, vivid picture of a shattered city being shepherded into a slow recovery on one side and steadily succumbing to a dark nightmare on the other.

There's a brief, moving preface in the book which sheds light on how the facts on the ground informed the writing of the novel, and on the fate of one character in particular:

There is a city called Berlin, and a Conference of Four Powers was held there in the bitter winter of 1954, but none of the people in this story were among those present. They are all inventions except for one person. "Horst Schill" was a real man, and his story is true. Unfortunately, it was not possible to ask his permission to include him. He has gone where nobody is likely ever again to ask his leave for anything.

One suspects that, despite Gainham's protestations, more than a few of the protagonists in the novel were based on real people, but the fate of the real Horst Schill lends the plight of the "fictional" Horst an added poignancy.

And from Sarah Gainham's second novel we move to her third – another work of espionage fiction which is a particular favourite of spy novelist Jeremy Duns, and which features a male lead supposedly based on Ian Fleming's famous secret agent...
Posted by Nick Jones (Louis XIV, the Sun King) at 06:10