Returning to the dystopian stories following a Violent World of Parker interlude, here's a largely overlooked book by an author who's rather better known as a crime fiction writer: 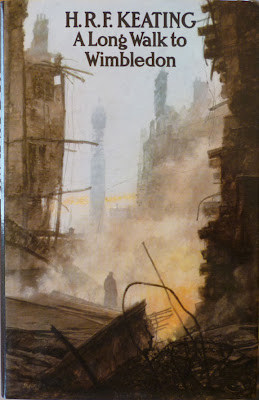 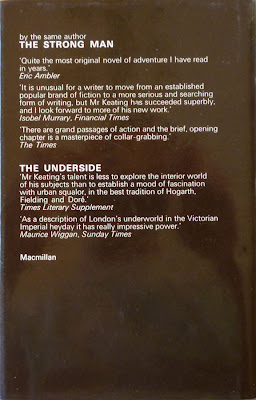 H. R. F. Keating's A Long Walk to Wimbledon was first published in the UK by Macmillan in 1978, under a dustjacket sporting a front cover painting by Paul Wright – who, I think, is the noted maritime painter Paul Wright, whose pictures also appear on Patrick O'Brian's book covers (among others). Set in the near-future – or I suppose the past now, since the novel's over twenty years old – in a London devastated by riots, looting, fires and artillery battles (yep, sounds like the London I know... and left three-and-a-half years ago) and largely deserted save for marauding gangs and crazed individuals (now it sounds like Penge...), the book charts the progress of Mark, who is forced to leave the comparative safety of Highgate (plus ça change...) in north London in order to trek across the city on foot to Wimbledon in the south west to see his dying, estranged wife.

Keating, who died in March of this year, is much better known as a crime novelist than as a chronicler of post-apocalyptic London; his Inspector Ghote mysteries in particular earned him a loyal following. But A Long Walk to Wimbledon was identified by Julian Symons as perhaps Keating's best book, while fellow crime writer Mike Ripley – who left a comment on the second part of my interview with spy novelist Anthony Price in August – wrote about the novel in his Shots column shortly after Keating's death, calling it "a remarkable feat of imaginative writing, all the more impressive for its downbeat and un-sensational approach to the urban apocalypse which has simply crept up and destroyed London in a frighteningly ordinary way – no alien invasions, no bubonic plague, no zombies." Ripley also reports that at Keating's funeral P. D. James – who'll be featuring in this series of posts very soon – also highlighted A Long Walk to Wimbledon, again noting its "breathtaking imagination".

For a while A Long Walk to Wimbledon was uncommon in first, but it's in plentiful supply at the moment: AbeBooks currently has twenty copies of the Macmillan edition for sale, mostly around £15–£30 mark, although there is one on there right now for £6 (remarkably, I found one for even less than that). I've yet to read the novel, but by the sounds of it, it should be a good one.

Moving on, and whereas the apocalypse in A Long Walk to Wimbledon seems to have taken place in a gradual, creeping manner, the one in our next novel is very sudden and very final. Or is it...?
Posted by Nick Jones (Louis XIV, the Sun King) at 04:34