The Hitch Hiker's Guide to the Galaxy by Douglas Adams: a 1980 BCA Edition, and How to Recognise the 1979 Arthur Barker True First Edition*

This run of post-apocalyptic posts has been a relentlessly gloomy affair thus far, but here's a book that proves the end of the world needn't necessarily be a downer: 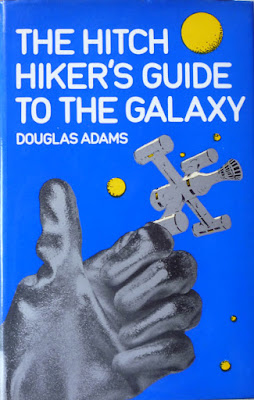 Douglas Adams's The Hitch Hiker's Guide to the Galaxy was first published in hardback in the UK by Arthur Barker (sometimes misspelt "Baker") in 1979. The copy above, however, isn't that edition: it's the BCA edition from the following year, which I bought for six quid in Kim's Bookshop in Chichester over the summer. Now, regular readers – yes, I'm looking at you two – might be aware of my general distaste for book club editions, but in this instance I'm perfectly happy with a BCA edition rather than a first edition. Reason being, the vast majority of the copies listed on AbeBooks as being the Arthur Barker first edition aren't the first edition either – or at least, not the true first. If we take a look at the back of the dustjacket on this BCA edition: 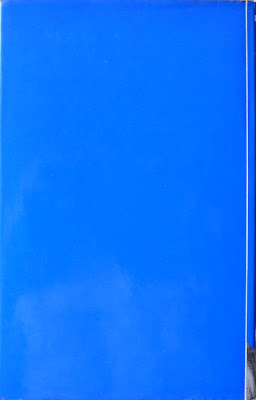 We can see it's a plain blue. That's also how the back cover appears on what's frequently described on AbeBooks, Amazon Marketplace and eBay as the first edition. But the back cover of the true first edition is different (as are the jacket flaps), which I can illustrate using a dustjacket I "found" online:

You'll notice there's a blurb on the back for Barker's 1979 hardback novelisation of Peter Hyams's 1978 movie Capricorn One, adapted by one Bernard L. Ross – better known as Ken Follett. That is how the jacket of the true first of The Hitch Hiker's Guide to the Galaxy should look; the copies with the blue back cover (and lacking a price on the front flap) are either book club editions or export editions, which, to my mind, shouldn't really be classed as first editions – and certainly shouldn't command the same prices as the much scarcer true first (around £400 to £600).

Anyway, that little lecture done with, enough of the boring bibliophiliacal balderdash. The method of mankind's demise this time out is, of course, the destruction of Earth in order to make way for a hyperspatial bypass, leaving a single human, Arthur Dent, to be spirited away in his pyjamas by his friend Ford Prefect. If you haven't read Adams's Hitch Hiker's novels – of which there are five in total, plus an additional, rather good 2009 continuation by Eoin Colfer – or seen the TV show, or heard the radio series, or seen the film... well, frankly, I'd be astonished. But I'd also recommend you do so immediately, as they rank among the funniest books (and TV shows, and radio series... maybe not films, though) ever written. The first two in particular – the second being 1980's The Restaurant at the End of the Universe – are utterly brilliant, stuffed with daft ideas, dreadful puns and memorable characters (Zaphod Beeblebrox, Marvin, the paranoid android). I read them (and saw the television series) years ago, and can still recall them vividly. 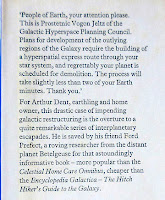 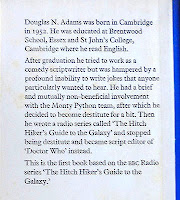 Let's press on to our penultimate post-apocalyptic post, which will be on a book by an author who, like H. R. F. Keating, is much better known as a crime novelist than as a writer of dystopian fiction...

* UPDATE 28/10/13: Except the true true first edition, according to the British Library Reference Team – commenting on Twitter regarding this Bleeding Cool post by Rich Johnston – is the 1979 Pan paperback edition. So there.

UPDATE 23/11/18: And I now own a copy of that true true first edition, having chanced upon a nice copy of the Pan paperback first printing outside a Lewes bookshop for a quid. 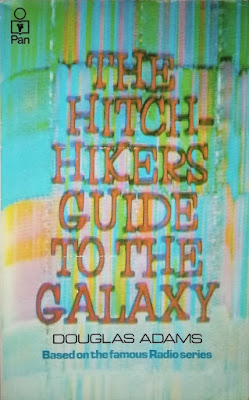