Interrupting the ongoing post-apocalyptic posts, just a (not so) brief follow-up to my examination of the 1967 Fawcett Gold Medal edition of Richard Stark's debut Parker crime novel, Point Blank! (retitled from The Hunter, originally 1962). If you've seen the comments on the version of that post on The Violent World of Parker, you'll know that TVWoP regular Jeffrey Goodman mentioned he had in his possession a piece of paraphernalia related to the Gold Medal edition, which he kindly agreed I could reproduce: 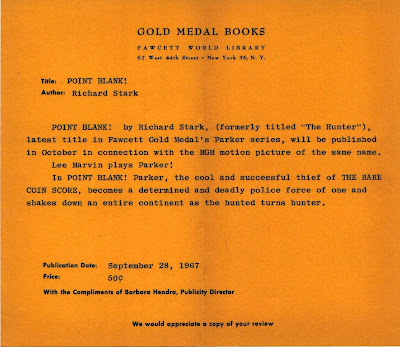 It's a very scarce, highly prized (by collectors; Jeffrey reports that a vintage paperback dealer offered him "quite a bit of money for that piece of paper"), original Gold Medal review slip, which Jeffrey found inserted in his copy of the book, and for me it sheds light on a number of issues surrounding both that edition and the wider publishing strategy of Gold Medal... 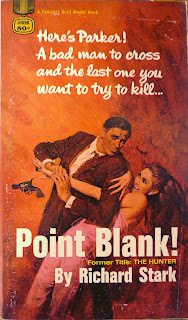 The bits of ephemera you sometimes find in secondhand books are always fascinating to me, and publicity info and press releases especially so – partly because I work in book publishing myself, but also because they afford a glimpse into an aspect of publishing which is largely invisible to the general public: marketing. How a book is marketed and sold in to the trade directly affects how it's perceived by booksellers and, in turn, readers. The Point Blank! review slip tells us a few things. For one, it confirms that this edition was, despite what the likes of AbeBooks would have you believe, published in 1967 (you'll recall from that previous post that there's no pub date inside the book, merely a 1962 copyright date). For another, it demonstrates that Gold Medal were very definitely marketing the novel as a tie-in to John Boorman's 1967 movie adaptation, despite not featuring any images from the film on the (Robert McGinnis-illustrated) cover.

Finally, it shows how publishers are perfectly happy to muddy the waters as regards the running order of a series if it suits their purposes. The review slip states: "In POINT BLANK! Parker, the cool and successful thief of THE RARE COIN SCORE, becomes a determined and deadly police force of one and shakes down an entire continent as the hunted turns hunter." That subtly suggests that Point Blank!/The Hunter is a sequel to The Rare Coin Score, whereas, in fact, it's the first novel in the series. As if to emphasize this, there's no mention of any of the other seven Parker novels that had been published by this point – and even inside Point Blank! itself, the only other Parker novels listed are The Rare Coin Score (Parker #9, 1967) and The Green Eagle Score (Parker #10, also 1967): 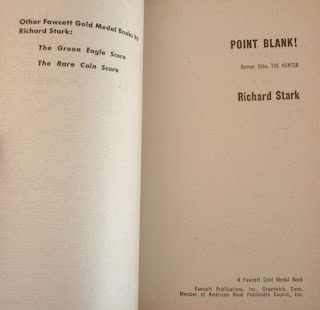 Of course, Gold Medal only picked up the rights to the series with The Rare Coin Score – previously the Parkers had been published by Pocket Books – so it's understandable that they only wanted to promote their editions. But it's no wonder that with the lack of information about the Parker series, and the retitling of a couple of the novels, the correct running order of the Parkers was, for many years, especially in the pre-internet era, a matter of some confusion.

That's something I'll be returning to in my next Violent World of Parker cross-post (which, I warn you now, will be horrifyingly nerdy – even moreso than this one – and consequently highly tedious and trying). Because when I saw this review slip, I suddenly made a connection that in turn answered a question I had about the British editions of the Parker novels around this period. On reflection that answer was blindingly obvious, but, well: I've never been the sharpest tool in the box... Look out for that later this week, but next here on Existential Ennui, it's back to the dystopian fiction...
Posted by Nick Jones (Louis XIV, the Sun King) at 05:01