It's the penultimate post in this lengthy series on post-apocalyptic novels; I had intended to carry on even longer with the series by looking at some other end-of-the-world books from my collection, but to be honest I'm starting to lose interest in the theme, and we're reaching the last of the "new" – as in, fairly recently bought – books now, plus writing this post on Pat Frank's Alas Babylon made me realise there were still a handful of books by suspense novelist P. M. Hubbard I hadn't blogged about – to be joined hopefully by something very special indeed from Hubbard. So with the end of the month fast approaching, time to draw a line under the end of the world and move on to pastures new, I reckon. But there's still a couple of post-apocalyptic books to come, the first of those being: 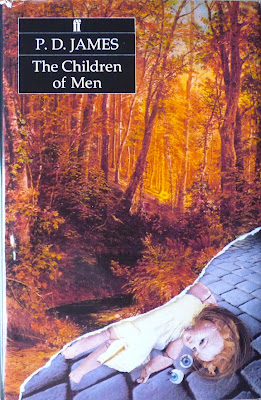 A 1992 first edition/first impression of P. D. James's The Children of Men, published by Faber and Faber in 1992. This, like yesterday's copy of The Hitch Hiker's Guide to the Galaxy, was bought during the second week of my summer hols, in this case in Any Amount of Books on Charing Cross Road in London. It's not exactly hard to find first editions of The Children of Men – there are umpteen copies on AbeBooks, for example – but it's a novel I've wanted to get hold of for a while now, so it was a serendipitous find. 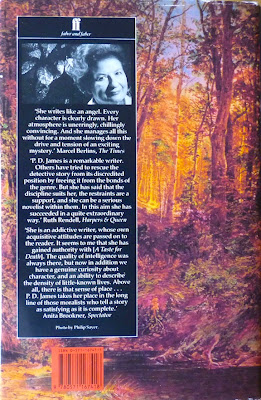 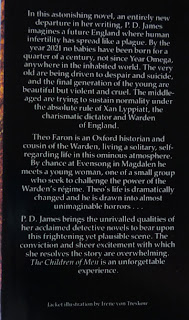 That said, I haven't read it yet; I've only seen Alfonso Cuarón's adjectiveless 2006 film adaptation, which I really like but which I gather is quite different to the novel (although according to Wikipedia P. D. James was pleased with the movie). This 2006 New York Times piece compares and contrasts the two versions, but one notable difference is that the book takes the form of, by turns, first-person diary entries by Theo Faron and third-person passages.

While The Children of Men isn't exactly an obscure work in P. D. James's canon, the author is much better known for her crime novels, especially those featuring Detective-Chief-Inspector Adam Dalgliesh. At least one of those, 1989's Devices and Desires (Faber), also boasts a dustjacket illustration by Irene von Treskow, who illustrated the jacket of The Children of Men, and who I've blogged about briefly before: one of her paintings appears on the 1988 Faber first of Michael Dibdin's debut Aurelio Zen outing Ratking. A former art director of advertising agency Saatchi and Saatchi (and an Anglican priest), her work also graces the jackets of a couple of other non-Zen Dibdin books: The Dying of the Light (Faber, 1993) and Dirty Tricks (1991), the latter of which Olman reviewed in glowing fashion fairly recently.

Ephemera and paraphernalia have loomed large on Existential Ennui of late, and this copy of The Children of Men came with a clutch of cuttings included: 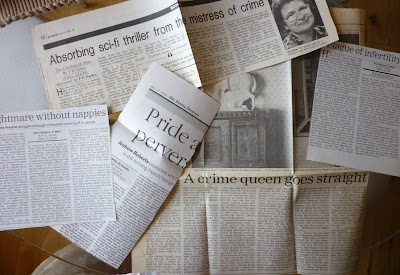 Contemporaneous reviews of the novel and interviews with James, clipped from local and national newspapers. In the internet age, a collection of clippings like this might strike one as being superfluous, but you'd be surprised how little newspapers have archived online, particularly contemporaneous book reviews dating from before the internet was widely available.

And with that, we've just one last post-apocalyptic novel to look at: an idiosyncratic, gloomy affair from 2006 which quickly became a celebrated, cultish classic, and consequently quite valuable in first. Before that though, a Violent World of Parker cross-post...
Posted by Nick Jones (Louis XIV, the Sun King) at 04:55