After a Westlake (Double) Score detour, it's back to the post-apocalyptic prose. And of all the books I'm featuring in this series of posts, this one might be the most obscure... 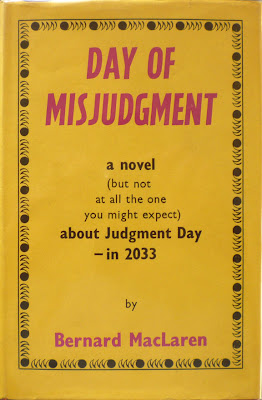 Day of Misjudgment by Bernard MacLaren was first published in hardback in the UK in 1956 by Victor Gollancz, under one of those vivid yellow dustjackets Gollancz were known for. And indeed, this Gollancz first edition was destined to be the only printing of the book; I bought this copy in the Bow Windows Bookshop on Lewes High Street, but AbeBooks currently has just five copies of the novel listed for sale worldwide, all of them Gollancz firsts. Not only that, but it was MacLaren's only published novel, after which he seemingly vanished into the ether: I've yet to find any information about him online, although I did turn up one review of Day of Misjudgment, reproduced from the May 1957 number of Nebula. (The formatting is a bit buggered in that link; scroll down to a third of the way through the third paragraph to find the start of the relevant passage.)

There's no author bio on the jacket of Day of Misjudgment either, chiefly because the blurb takes up almost all available space. And that blurb really has to be seen to be believed: it starts on the dustjacket front flap, carries on on the back flap, and then continues over onto the back cover! Take a look: 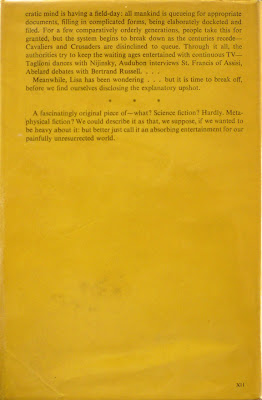 I particularly like the line on the back, "...but it is time to break off, before we find ourselves disclosing the explanatory upshot". Er, well, that's about all there is left to "disclose"! Evidently that Gollancz copywriter was getting paid by the word. Mind you, said copywriter does effectively capture the tone of the novel, which is exceedingly jaunty (and very British), although rather more exclamatory than the blurb suggests: barely a sentence goes by without an exclamation mark being stuck on the end, which, in truth, becomes a little wearisome.

The apocalyptic MacGuffin which propels the story is the atrophication of mankind due to explosion of ultimate weapon the XYB bomb, with the additional consequence that the dead have also risen. All parties are now converging on the Vale of Jehoshaphat to await Judgement Day, as foretold by a super-computer called The Oracle.

It's an interesting novel, a bit dated but generally amusing, stuffed with daft notions and reminiscent in a way of a hyperactive Hitch Hiker's Guide to the Galaxy (although not as funny as Douglas Adams's meisterwerk). Ken Slater in his Nebula review called it "witty in places, serious and moral in others; exciting, thoughtful, and above all entertaining", which is a reasonable assessment I reckon.

The words "amusing" or "witty" couldn't really be applied to our next post-apocalyptic novel, however: a much more downbeat 1957 work which has been correctly hailed as a Cold War classic, and which boasts a beautiful illustrated dustjacket...
Posted by Nick Jones (Louis XIV, the Sun King) at 05:40