We're approaching the end of John le Carré/George Smiley Week here on Existential Ennui, which I've embarked upon to commemorate, or celebrate, or just plain "big up" the British release of the new movie adaptation of Tinker, Tailor, Soldier, Spy, which hits cinemas today. And having covered all three parts of le Carré's "Karla Trilogy" – of which Tinker, Tailor... is the first instalment – today we turn to the final le Carré to feature Smiley – although it's a rather different proposition to its predecessors... 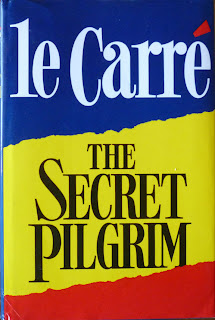 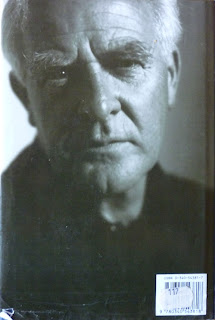 The Secret Pilgrim was published in hardback by Hodder & Stoughton in the UK in 1991. Now, the thing to note here is a word that I haven't included in that preceding sentence, one which I invariably trot out when introducing the hardback books I blog about: "first". The reason for that being, although this edition of The Secret Pilgrim was the first British one, it wasn't the first one in the world. Unusually in le Carré's backlist, that honour goes to the American first edition: 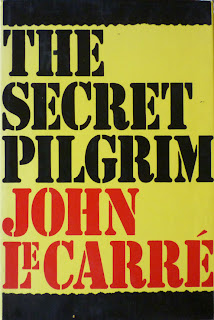 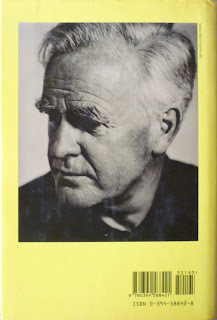 Which was published by Knopf, also in 1991, but in January, some months before the UK edition. This can be established courtesy of a number on the dustjacket back flap of the American edition – which sports the code "1/91" – and the copyright page in the British edition: 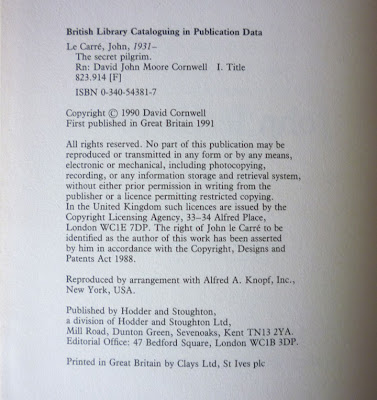 So the US edition is in fact the true first. Of course, none of that quite gets to the nub of the matter, namely why I own two copies of the same book – although on past – and indeed recent – evidence, I suppose that shouldn't be terribly surprising. Fact is, I picked up the British first edition for a quid in a Lewes charity shop, and then shortly after that spotted the American first on a cheap books table outside a Cecil Court bookshop. Suffice to say, since I'd always rather have a true first edition (and I prefer the deckled page edges of the US edition and its R. D. Scudellari-designed dustjacket), I'll be releasing the British one back into the wilds shortly, donating it to my mum's forthcoming Beckenham Book Fair, which is taking place at Beckenham Baptist Church, Elm Road, on 12 November, and which was inspired in some small part by my books obsession.

The Secret Pilgrim does, as I say, mark George Smiley's last literary hurrah (to date, anyway), but it's actually narrated in the first person by Ned (no surname), a British intelligence operative in the twilight of his career whose task it is to train the next generation of spies. And to their Sarratt passing-out dinner at the end of their training course, Ned has invited as guest of honour... George Smiley.

I haven't read The Secret Pilgrim myself, but my estimable friend and colleague – and noted le Carré aficionado – Roly Allen, has, and reckons it's "a minor work in the canon, but very good fun and it fleshes out the Circus mythology very nicely. One gets the impression that le Carré wanted to use up a bunch of short story ideas (based, apparently, on real incidents) and give Smiley a final (final) goodbye (Smiley retires more times than Frank Sinatra) and hit upon Ned's career structure as a way of doing so."

It does of course touch upon the usual le Carré themes. There's that clever sensitive young lady with the nice bum and an overdeveloped conscience, again! (Actually – yay – there are two! And one of them is sexually adventuresome!) There's the remote house on the Atlantic Coast, again! There are the (two!) stories hingeing on is-he-one-of-ours-or-one-of-theirs, again! There's that Bildungsroman-of-the-middle-aged-man trope, again!

But hey, who cares. It's jolly good nonetheless. And Smiley has one line which has really stuck with me – which is his take on the end of the Cold War – which a lot of people would do well to remember, especially when they are erecting statues of Ronald Reagan in London and not mentioning Gorbachev once. "It was their emperor, not ours, who had the nerve to mount the rostrum and declare that he had no clothes". Ultimately the Cold War ended because the Russians chose to end it: an "impossible event" which many people still cannot quite compute. (Not that Gorbachev can't have been a saint: he was of course a loyal party functionary for three decades before glasnost, etc).

And there you have it: The Secret Pilgrim in a nutshell. Thanks to Roly for his learned and witty insights, and with that, le Carré/Smiley Week is almost done. But not quite. Because tonight I'm off to see Tinker, Tailor, Soldier, Spy at the cinema, so I'll be posting some thoughts on that over the weekend. I'm not sure when precisely, because I'll be spending part of Saturday and Sunday in Essex dressed as a geography teacher and dancing to '80s hits (don't ask). All being well, though, you can expect a final missive sometime over the next day or two...
Posted by Nick Jones (Louis XIV, the Sun King) at 04:26