And so we reach the climax of John le Carré/George Smiley Week, a week which has seen an overlong examination of two first editions of le Carré's masterwork, 1974's Tinker, Tailor, Soldier, Spy; a review of its follow-up – and the second instalment in the "Karla Trilogy" – 1977's The Honourable Schoolboy; another review of the third part of the Quest for Karla, 1979's Smiley's People, and its attendant 1982 BBC TV adaptation; and a look at Smiley's final appearance, in 1991's The Secret Pilgrim, ably assisted by the erudite Roly Allen. 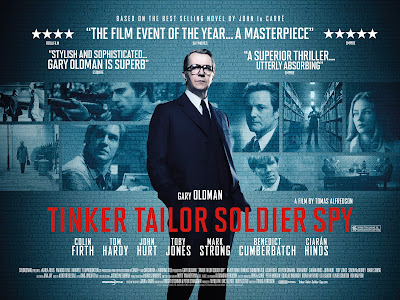 And we finish, slightly later than planned (I had hoped to get this post up over the weekend, but no matter), with some thoughts on Swedish director Tomas Alfredson's brand new Tinker Tailor Soldier Spy movie, which hit British cinemas on Friday and is, lest we forget, the reason for all this le Carré blogging. And I'm delighted to report that the film is magnificent: not quite as magisterial as the original novel, but even better than the 1979 BBC adaptation, whose long shadow it manages to elude.

Where it benefits is, surprisingly, in its relative brevity. Clocking in at just two hours, it's less than half the length of the Alec Guinness-starring television version, but the compacting of events helps to clarify them, going some way towards countering the complex nature of the plot. There's still a lot to take on board: an opening mission to Hungary (Czechoslovakia in the original novel) which results in British intelligence operative Jim Prideaux (Mark Strong) being shot; the consequent ejection from the Circus (the colloquial name for MI6) of Control (John Hurt) – whose off-the-books directive sent Prideaux to Budapest – and Control's number two, George Smiley (Gary Oldman); the ascension of Percy Alleline (Toby Jones) to head of the Circus; and the introduction of fellow Circus big beasts Bill Haydon (Colin Firth), Toby Esterhase (David Denick) and Roy Bland (Ciarán Hinds).

And that's before we even get to Smiley being brought back out of enforced retirement to hunt down a mole at the top of the Circus, assisted by Peter Guillam (Benedict Cumberpatch); the introduction of "rogue" agent Ricki Tarr (Tom Hardy), who has vital information about the mole; the further introduction of bit-part players Kathy Burke (Connie Sachs, the Circus' expert on Russia), Svetlana Khodchenkova (Irina, the object of Tarr's affections) and Simon McBurney (Oliver Lacon, Permanent Secretary at the Cabinet Office); and the concept of "Witchcraft", the name for the source of the Circus' information on the Soviet Union, and the means by which Percy Alleline is propelled to his elevated position. That the movie Tinker Tailor retains all these characters and plot elements and is still comprehensible (if you pay attention) is no mean feat in itself, but even more remarkable is the way the film also taps into the novel's escalating tension, something which, to my mind, was largely absent from the Beeb version. 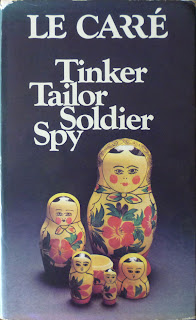 There are alterations, mainly to do with locations, although one character becomes a closet homosexual, a trait which, if it is in the novel, I must admit rather passed me by. But for the most part the film is quite faithful. Necessarily that means it's a period piece, but the story's theme of betrayal – both geopolitical and emotional – remains timeless. The early 1970s setting is both effectively recreated and lent an aesthetically pleasing art-house gloom; the Circus is realised as a cavernous warehouse dotted with curious office "pods", the most striking of which is the soundproofed main meeting room, its convex orange walls giving it the appropriate appearance of a hellish lunatic-asylum cell.

The performances are uniformly excellent. Oldman's Smiley has been getting all the attention, but for me John Hurt's irascible Control, Colin Firth's suave, agreeable Bill Haydon and especially Tom Hardy as poor, doomed Ricki Tarr are standouts. As for Oldman, I can't recall ever seeing him this still, this internalised: his Smiley betrays little emotion, aside from one raised-voice moment towards the end. It's a mannered performance, for sure: all slow reactions and creaking turns; but then so, in its own way, was Alec Guinness's (neither Oldman nor Guinness are/were "naturalistic" actors).

Probably Oldman's biggest scene as Smiley comes when he tells Peter Guillam about his encounter with his nemesis, KGB supremo Karla, in India many moons ago; here the film hews closer to the source text than the '79 TV version, which showed the meeting rather than – as happens in the movie – having Smiley recount it. But three other Smiley moments stayed with me, all of them, I believe, new inventions by Alfredson and screenwriters Bridget O'Connor and Peter Straughan. 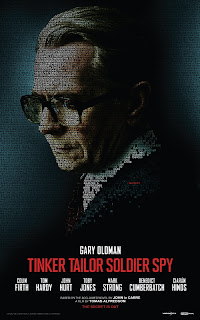 The first of those arrives early in the film, in a scene – not in the novel – showing Control's deposing during a meeting. When asked, "And what about Smiley?" Control replies, "Smiley is coming with me" – a statement which appears to be news to George: Oldman's reaction is of barely suppressed astonishment. The two traipse through the bowels of the Circus and finally stand facing each other on the pavement outside. There is no salutary handshake; wearily, Control simply turns and walks away, leaving a bemused Smiley to do the same, his life effectively over.

The second moment is a direct nod to Alec Guinness, and comes shortly after Smiley's dismissal. Up to this point, while Smiley is bespectacled, his glasses are quite ordinary: thin-rimmed, unremarkable. But his eyesight worsens in retirement, and a visit to the optician's results in a new pair of spectacles: bifocals, similar to those sported by Guinness in 1979.

As for the the third moment, that acts as a triumphal coda at the film's close. I shan't spoil it, except to say that it sets up a sequel in a way that the novel doesn't, and is underlined by a suitably jolly and debonair cover version of Charles Trenet's "La Mer" by Julio Iglesias.

There are other new additions, notably a shocking execution and a recurring scene depicting a Christmas party at the Circus, which features a blink-and-you'll-miss-it cameo by le Carré. Even so, the spirit of the novel remains intact. By any measure Alfredson's (comma-less) Tinker Tailor Soldier Spy is a triumph, better than we had any right to expect and a definite a contender for film of the year. It really is that bloody good.

And that's it for le Carré and Smiley for now, although I will be returning to both down the line, with posts on the earlier George Smiley novels. Next up, though, it's back to the Donald E. Westlake science fiction magazine stories...
Posted by Nick Jones (Louis XIV, the Sun King) at 07:05