It's John le Carré/George Smiley Week here on Existential Ennui – a week's worth of posts celebrating the release of the new movie adaptation of Tinker, Tailor, Soldier, Spy. And following on from yesterday's review of the second part of le Carré's "Karla Trilogy", 1977's The Honourable Schoolboy, today it's the turn of the third and final part in the Quest for Karla: Smiley's People. But I won't just be reviewing the novel – oh no. Much as I did with this post on Tinker, Tailor..., I'll also be reviewing its 1982 BBC TV adaptation, starring Alec Guinness as George Smiley. Exciting stuff, and no mistake. 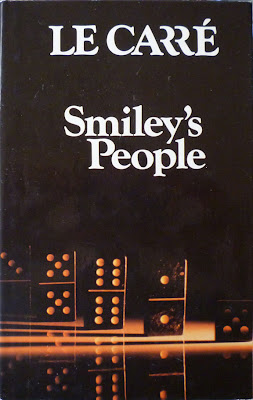 First published in hardback in the UK by Hodder & Stoughton in 1979, Smiley's People begins with George Smiley out in the cold once more, following his brief tenure as head of the Circus (le Carré's name for Britain's intelligence service) in The Honourable Schoolboy. Now replaced by Sir Saul Enderby, Smiley is reactivated by Enderby and Permanent Secretary at the Cabinet Office Oliver Lacon when General Vladimir, a Russian emigre of whom Smiley was chief case officer (his "vicar", to use the espionage nomenclature) is murdered on his way to a crash meet. Lacon is keen for Smiley to sweep the whole mess under the carpet, but Smiley has a different agenda, one that will again lead him inexorably towards his shadowy nemesis, the head of Moscow Centre, Soviet spymaster Karla.

The book and the television series of Smiley's People are so much of a piece that it makes more sense to discuss them together rather than separately and consecutively. Indeed, it could be argued that – and unlike, I'd suggest, Tinker, Tailor, Soldier, Spy and its TV spin-off – the Beeb adaptation of Smiley's People is the superior beast. While le Carré did have some involvement with the 1979 telly version of Tinker, Tailor... – adding the closing scene between Smiley and his wife, Ann, for one – for Smiley's People he took on the role of co-screenwriter (with John Hopkins). He's also, I believe, stated that Alec Guinness's portrayal of Smiley in Tinker, Tailor... influenced the spy's characterization in the novel of Smiley's People.

Certainly the majority of the scenes in the Smiley's People TV series and a good chunk of the dialogue are lifted verbatim from the page. But whereas with Tinker, Tailor... the TV screen did little to enhance the novel's introspective nature – in fact slightly smothered it – Smiley's People more readily lends itself to live action, as, instead of squirreling himself away in a Paddington hotel room to pore over old files, here George by necessity must do a lot of the legwork himself, practicing his tradecraft as he trots back and forth to Paris, Hamburg and Switzerland. He's never been so animated in the Karla Trilogy – in all senses – as he is in Smiley's People: determined, driven, obsessed with the hunt for Karla. This is Smiley on the warpath.

His quest leads him to seek out old contacts, among them the flamboyant Hungarian Toby Esterhase – himself ejected from the Circus and now making a living trading in fake artworks – and the Russian expert Connie Sachs, gone to seed in a tumbledown country shack, addled by booze yet still able to conjure up the past under duress. Smiley exploits his former associates mercilessly; some are eventually happy to help the legendary George Smiley, others less so, but all are pressed into service irrespective of their reluctance or current arrangements.

But in many respects Smiley is himself a pawn, resurrected as a waddling Cold Warrior by Saul Enderby and Oliver Lacon, yet in danger of being disavowed should his mission go too far off piste. In one memorable scene in both the novel and the TV series he's interrogated over dinner by Lacon – not so much to extract a progress report as to provide a spot of relationship counselling. Lacon's marriage is failing – pressures of the job and all that – so he elicits Smiley's advice, little realising that Smiley's own marriage is over – here more finally than before; prior to setting off on the final leg of his European tour, George visits Ann in Cornwall, resulting in a clifftop conversation that's as terminal as it is chilly.

I mentioned at the end of the post on The Honourable Schoolboy how it's become clear to me that each of the novels in the Karla Trilogy hinges on relationships with women. In Tinker, Tailor, Soldier, Spy, Smiley is unbalanced by the Circus mole's affair with his philandering wife, and consequently blinded to the mole's treachery – remember that it's as a result of a past, pivotal encounter with a younger Karla (played, in the TV Tinker, Tailor..., by Patrick Stewart, who briefly reprises his role in Smiley's People) that the mole is eventually directed to begin that affair, Karla having been tipped off by the aforementioned cigarette lighter, inscribed to George from Ann, which Karla pockets – while in The Honourable Schoolboy, Jerry Westerby is sent into a tailspin by Lizzie Worthington.

In Smiley's People, the central role of the women in these men's lives is made explicit. Karla is attempting to craft a "legend" – a falsified background – for a female agent, exploiting the Russian expat community in Paris. Who this "agent" is, and why Karla has had to resort to such unorthodox methods, is at the heart of the story, and in a way is a reversal of George's betrayal by Ann. As if to underline this theme of romantic or emotional betrayal, in the closing moments of both book and TV adaptation the cigarette lighter comes back into play, a symbol of the damage inflicted by Smiley and Karla upon one another and on their relationships. Suitably, aptly, in the end the lighter is discarded. In Smiley's People – as in Tinker, Tailor, Soldier, Spy and The Honourable Schoolboy – a wayward woman proves the downfall of a fractured man; that the trilogy was begun shortly after the breakdown of le Carré's own marriage cannot be a coincidence.

Given le Carré's close involvement in the making of the TV Smiley's People it's perhaps unsurprising how faithful it is to the book. Nevertheless, on occasion the transposition from page to screen is arresting, not least in the use of locations: the German shipyard where Smiley goes to find an associate of Vladimir's, Otto Leipzig, is so precisely realised – or, more accurately, matched – that it was just as I had pictured it in the novel. There are minor alterations: since the BBC skipped adapting The Honourable Schoolboy (reportedly due to budgetary concerns over the Far East locations), aspects of Sam Collins's (minor) role are inherited by Lauder Strickland, lent a delicious obsequiousness by the brilliant Bill Paterson. But by and large, everything in the novel ends up on the screen.

To my mind, perhaps the best sequence in the television series comes when Smiley, Strickland, Peter Guillam and another Circus colleague, Molly Meakin (played by Lucy Fleming, niece of James Bond creator Ian Fleming), are gathered together by Saul Enderby in his office to chew over the available evidence. (In the novel it's merely Smiley, Enderby and Sam Collins, and the meeting takes place in a Knightsbridge hotel.) As Enderby, Barry Foster puts in just this one appearance in the series, but by Christ he makes it count. Pompous, louche, self-assured, but still sharp, Foster's Enderby is a scene-stealer of a performance: part genial host, part terrifying headmaster figure, with a neat line in withering put-downs. At one point, observed by Guillam, he caresses Molly's neck and shoulders, an action that accrues an added piquant significance when you recall that, in The Honourable Schoolboy, Meakin is the reciprocated object of Guillam's affections.

Director Simon Langton's staging of the Enderby office scene is a masterclass of slyly exchanged glances, tacit acknowledgments and, in the case of George, feigned engrossment in a file. As for Alec Guinness as Smiley, his inhabiting of Smiley's skin is so complete as to make the tissue-thin demarcation between the two almost unnoticeable. More than ever before, Guinness is George Smiley, both in the adaptation and in the source text. One thing's for sure: Gary Oldman has a hell of a lot to live up to in the new Tinker, Tailor, Soldier, Spy film.

Though Smiley's People marked the end of George Smiley's literary career as a leading man, it wasn't quite his final appearance. That honour goes to the next book I'll be looking at, a much later novel from 1991, which I have in two editions. But which was the first...?
Posted by Nick Jones (Louis XIV, the Sun King) at 04:27