From a meandering missive on the first instalment in John le Carré's "Karla Trilogy", le Carré/George Smiley Week continues with a review of the second novel in that triumvirate: 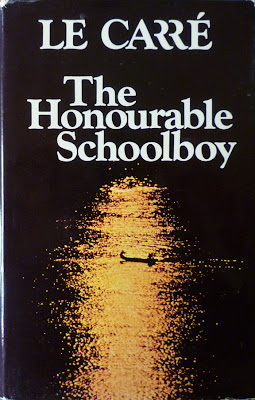 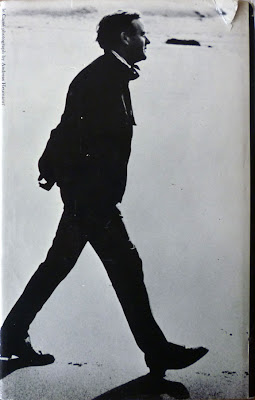 The Honourable Schoolboy was first published in the UK by Hodder & Stoughton in 1977, but despite being a direct sequel to 1974's Tinker, Tailor, Soldier, Spy, it's a rather different kettle of fish to its illustrious, magisterial predecessor. Following the events of the former, here we find the Circus – le Carré's location-inspired name for MI6 (based, as it is, in London's Cambridge Circus) – in a state of extreme disrepair – its upper echelons excised, a shadow of its former self. The mole hunt and its denouement have left George Smiley in temporary charge of the service – inherited from Percy Alleline, who in turn inherited it from the deceased Control – assisted by Peter Guillam, Russian expert Connie Sachs and China watcher Doc di Salis, as well as shady ex-Circus type Sam Collins.

It's Smiley's obsession with Karla – head of Moscow Centre, and the man who placed the mole at the heart of the Circus – which drives the novel. Lest we forget, it was on Karla's direction that the Circus mole began an affair with Smiley's wife, Ann, after Karla trousered Smiley's inscribed-by-Ann cigarette lighter during a years-distant meeting between the two. On the wall of Smiley's office there now hangs...

...a passport photograph by the look of it, but blown up far beyond its natural size, so that it had a grainy and some said spectral look. One of the Treasury boys spotted it during an ad-hoc conference about scrapping the operational bank accounts.

'Is that Control's portrait by the by?' he had asked of Peter Guillam, purely as a bit of social chit chat... Control, other names still unknown, was the legend of the place. He had been Smiley's guide and mentor for all of thirty years. Smiley had actually buried him, they said: for the very secret, like the very rich, have a tendency to die unmourned.

'No, it bloody well isn't Control,' Guillam the cupbearer had retorted, in that off-hand, supercilious way of his. 'It's Karla.'

Based in the hollowed-out ghost-ship that is now the Circus, Smiley, Connie and di Salis's efforts to unravel Karla's far-reaching conspiratorial tendrils (and the Circus mole's treachery) and salvage what they can of the service's networks of agents make for effortless reading. But Smiley at al aren't the primary focus of The Honourable Schoolboy. The novel's ostensible lead – and the "schoolboy" of the title – is in fact former newspaperman and Circus stringer Jerry Westerby. Dispatched by Smiley to Hong Kong, Westerby follows the trail of money that ultimately leads to Karla, a trail that takes Westerby to Cambodia and Thailand and involves a Mexican mercenary, a Chinese billionaire, and the paramour of both those individuals, Lizzie Worthington, a femme fatale who will prove to be Westerby's undoing. 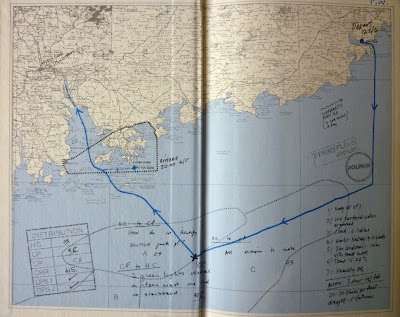 The Honourable Schoolboy is a novel that divides opinion. While some appreciate the depth of characterization le Carré brings to Jerry Westerby, others find Westerby's story a distraction from the goings-on at the Circus. I must admit that I fell into the latter camp whilst reading the novel, finding Smiley and co.'s patient picking-apart of Karla's conspiracies more interesting than Westerby's travails. But on reflection, and at a little distance, though the Far East sequences are densely written, and the confused, fuming Westerby a difficult proposition as a lead, in the end his exploits are intrinsic to the novel, lending it a richness and profundity that makes The Honourable Schoolboy a complex but rewarding piece of fiction. 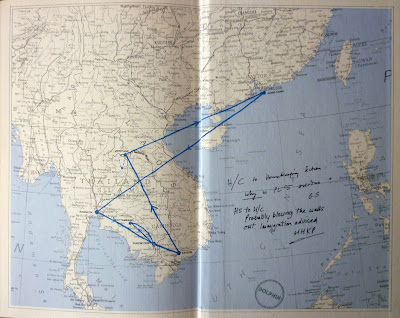 Unlike Tinker, Tailor, Soldier, Spy, British first editions of The Honourable Schoolboy are readily available and can be had for less than a tenner, although if buying online via AbeBooks, Amazon Marketplace or eBay, it's worth checking with the seller that what they're offering is indeed the first edition. As I outlined in this post, a lot of the copies listed as the first online are missing a price on the dustjacket front flap, and have white endpapers as opposed to the map endpapers you can see here. I now believe my assumption in that rather ill-tempered post – that the lack of price and blank endpapers signifies a book club edition – was mistaken; I think it merely signifies an export edition. But even so, I know which version I prefer.

One thing that has become clear to me through reading all three parts of the Karla Trilogy is how the plot – and much of the emotional impact – in each hinges on the main players' relationship with a woman. I'll be exploring that further in the next post, which will be on the third and final novel in the "Quest for Karla", 1979's Smiley's People, with a special emphasis on its 1982 BBC television adaptation...
Posted by Nick Jones (Louis XIV, the Sun King) at 05:00