This Friday sees the release of Swedish director Tomas Alfredson's new adaptation of John le Carré's 1974 spy novel Tinker, Tailor, Soldier, Spy. And since le Carré is an author I've returned to a few times on Existential Ennui (click on his tag at the bottom of this post to locate previous entries), and Tinker, Tailor... is among the best books I've ever read, this week's posts will be exclusively dedicated both to le Carré and to the novelist's most famous creation, George Smiley, star of Tinker, Tailor... and its sequels, 1977's The Honourable Schoolboy and 1979's Smiley's People (not to mention many other novels besides). Together, those three books form the "Karla Trilogy" – or "Quest for Karla" – and over the coming days I'll be reviewing the second and third instalments in that trilogy – with a special focus on the 1982 television adaptation of the latter – as well as taking a look at the final le Carré novel to feature Smiley. 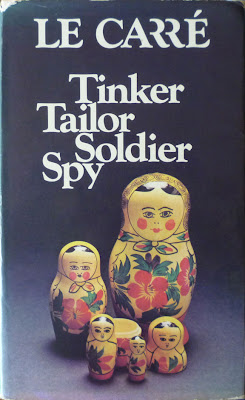 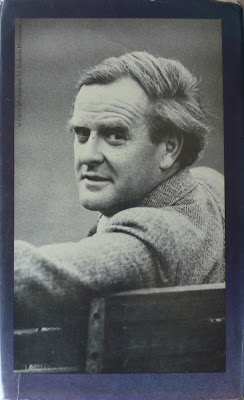 A British first edition of Tinker, Tailor, Soldier, Spy, published by Hodder & Stoughton in 1974. Now, regular readers might recall my having blogged about this magnificent book – in this particular edition – before. Most recently that was in this post, in which I reviewed the novel – although in truth that "review" consisted of little more than a hastily assembled string of nouns – and then banged on about its 1979 BBC TV adaptation; needless to say this is precisely the blueprint I intend to pursue with Smiley's People later this week. But I also blogged about the book in this post, in which I examined various aspects of the British first edition – its cover design, photography and so forth – along with its collectibility and value at that point in time.

So how come I'm now showing you another first edition? Well, while the copy of the first I showcased before – which I bought on Amazon Marketplace last year – is in generally good nick, it does have a fold running vertically down the front of the dustjacket: 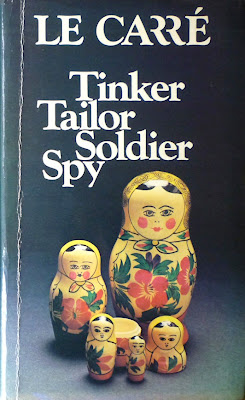 Despite this flaw, I was perfectly happy with this copy. But then more recently I happened to be browsing Amazon Marketplace and spied (ba-dum, tish) a very cheap copy – as in, a couple of quid – of what I suspected might also be a first edition (the item description was somewhat minimal). So I took a punt, and it turned out it was indeed the first edition – and first impression (the Hodder first went through at least three printings, later printings of which can be identified by the words "Second impression" or "Third impression" directly after the "First printed 1974" in the copyright text block). Result.

See, while British first editions of the novels either side of Tinker, Tailor, Soldier, Spy are in fairly plentiful supply (with the exception of the three novels from the beginning of le Carré's career and one or two more recent efforts), firsts of Tinker, Tailor... itself have become rather scarce. That might be down to it being widely regarded as le Carré's best novel – perhaps rivalled only by 1963's The Spy Who Cam in from the Cold – but I suspect it might also be because, back in 1974, there hadn't been an espionage novel from the author for six years. The book immediately preceding Tinker, Tailor..., 1971's The Naive and Sentimental Lover, was an autobiographical work written in the wake of the breakdown of le Carré's marriage; his last spy novel, A Small Town in Germany, was published in 1968. So his return to the genre might explain the multiple printings of Tinker, Tailor... and consequent scarcity of the true first.

Whatever the case, in recent weeks, with the new film imminent, prices for the first of Tinker, Tailor... have skyrocketed. Copies on eBay are currently troubling the £150 mark, and could well go higher. Which leaves me with something of a dilemma: what to do with the additional copy of the first I own – and indeed, which one to keep even if I do decide to sell. Both copies have their merits: the "newer" copy doesn't have the vertical fold in the dustjacket that the "older" one does, but it does have more edgewear and chipping on the jacket: 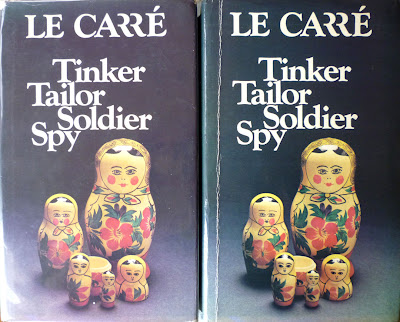 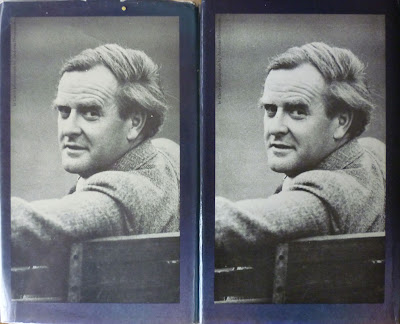 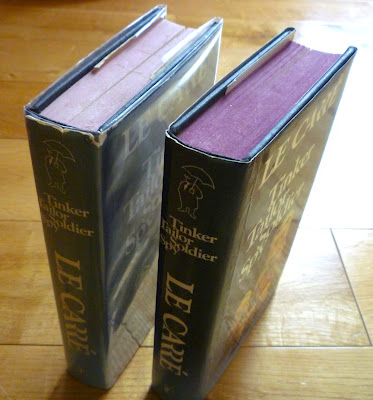 On the other hand, the page edges of the original copy are a little foxed (and the publisher's-stain on the top edges more pronounced), and the text block is cleaner and brighter in the more recent copy: 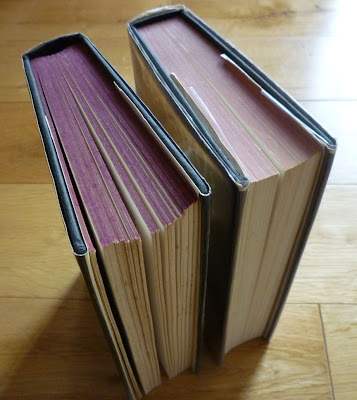 And while the indicia is the same in both:

The endpapers are a light peach in the more recent copy and – possibly due to where or how it's been stored – a pronounced orange in the original one:

Curiously, they also feel thicker in the original, as if a heavier paper stock were used. The cases, however, are virtually identical: 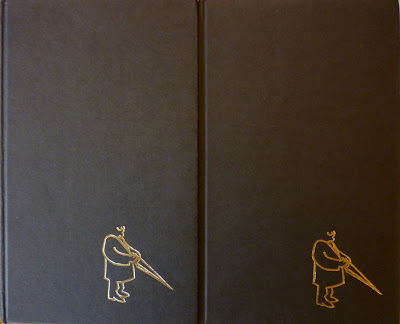 So, I'm in two minds as to what to do. Or, more accurately, three or four minds. Do I sell one? If so, which one? Do I keep both? Or – and on previous evidence this is the most likely outcome – do I dither ineffectually until the moment has passed? What say you, readers?*

While we await the answer on that one, let's move on to the next post in le Carré/Smiley Week, which will be on the sequel to Tinker, Tailor..., 1977's The Honourable Schoolboy...

* Belatedly, I decided to sell the first copy. The eBay listing can be found here.
Posted by Nick Jones (Louis XIV, the Sun King) at 06:07