Veering away from the signed editions momentarily, I mentioned at the end of yesterday's post on a signed edition of Gavin Lyall's Blame the Dead that, during the course of what I laughingly call my research into Lyall's inscription inside the book, I turned up a nugget of info about an earlier Lyall novel, which answered a question that had been bothering me for a while. (Let's not get into why such things prey on my mind; that way lies madness.)

To recap: the dedication in that copy of Blame the Dead is to a "Frank", who, I reasoned, might well be Frank Hardman, with whom Lyall and an old schoolfriend named Martin Davison worked on the story for a 1969 Hammer film titled Moon Zero Two. Intrigued by Lyall's involvement with the movie, I dug a little deeper and turned up this interview with Martin Davison on David Sisson's sci-fi model website. In the interview Davison reveals all manner of titbits about the making of Moon Zero Two in general and Lyall's role in particular, as well as one or two extraneous bits of Lyall info, such as the fact that he was a keen model-maker (as was Davison). But the quote that really caught my eye concerned this book: 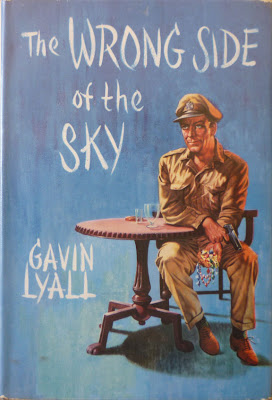 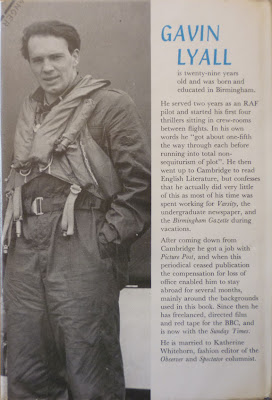 The Wrong Side of the Sky was Gavin Lyall's debut, published in hardback by Hodder & Stoughton in 1961. It's an excellent thriller, starring Jack Clay, the first of a series of pilot protagonists in Lyall's novels (Lyall was an RAF pilot himself, as evidenced by the back cover photo), who embarks on a quest for lost treasure around the islands of the Middle East, which entails, as you'd expect, a number of gripping flying sequences. P. G. Wodehouse said of the book, "Terrific! When better novels of suspense than this are written, lead me to them." (Hopefully someone led Mr. Wodehouse to Lyall's later novels, some of which are indeed better than The Wrong Side of the Sky.)

Ever since I bought this first edition of The Wrong Side of the Sky, at the – now sadly defunct – Rye Book Fair back in 2009, I've been wondering who the artist responsible for the painting on the front of the dustjacket was. There's no credit on either jacket flap, and no signature on the painting itself. So imagine my delight (go on: just imagine it) when David Sisson's interview with Martin Davison finally provided the answer. Here's the relevant quote:

"[Lyall] was a very successful thriller writer and continued as such for many years... I attach a scan of an extremely beaten up book cover of his first thriller The Wrong Side of the Sky from 1961. The artwork on the cover was actually done by Gavin himself, because he thought the cover provided by Hodder and Stoughton was inadequate for the job."

There you have it. The cover artist on the first edition of The Wrong Side of the Sky by Gavin Lyall was... Gavin Lyall. And a creditable job he did, too. Mystery solved!

Anyway, next week I'll be rounding off my series on signed editions with a final handful of books; I've been saving the best to last and there are some real doozies in this lot, among them novels by authors who are favourites both old and new on Existential Ennui. I'm keen to get through them by the end of next week because the week after that I'll be dedicating Existential Ennui to a spy fiction author who's also made a fair few appearances on this blog, to mark the occasion of the release of a new film based on one of his most famous books: Tinker, Tailor, Soldier, Spy. That's John le Carré Week – or, perhaps more accurately, George Smiley Week – in just over seven days' time.

Next up, though, as promised, I'll likely have another Donald E. Westlake science fiction story...
Posted by Nick Jones (Louis XIV, the Sun King) at 05:02