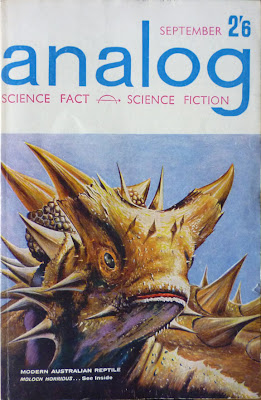 On we go with Donald E. Westlake's science fiction magazine stories; and like the last SF story I wrote about, "They Also Serve", this one also appeared in Analog Science Fact & Fiction, and has similarly never been reprinted since (and it's not even available via Project Gutenberg). But there the parallels end, because while "They Also Serve" clocked in at just four pages, this one stretches over thirty – it's called a "novelette" in the table of contents – and is a much stronger work all round. 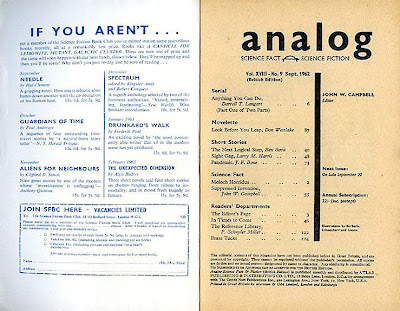 "Look Before You Leap" appeared in the May 1962 issue of Analog (cover art by the late, great John Schoenherr), although once again the edition seen here is the British one from a few months later. This time the story is credited to "Don Westlake", and is only trumped in the table of contents by the first part of Darrell T. Langart's "Anything You Can Do" (which is around the same length as Westlake's tale). Told in the third person, our protagonist is twenty-year-old Jeremy Masters, a trainee in the US Air Force on his third day of bivouac. Crawling through a "pitch-black dry drainage pipe", with Tactical Instructors dropping tear gas bombs at either end, Jeremy becomes so terrified that he suddenly finds himself hundreds of miles away, still on his hands and knees, on his bed back home at his mom's place in Pennsylvania. No sooner has he registered his new surroundings, however, than he's back in the pitch-black pipe again.

Jeremy, we learn from a certain Colonel Brice and his associates Ed Clark and Paul Swanson, who have been studying the bivouac, has unlocked an innate but previously dormant ability to teleport. Only now Jeremy refuses to believe he teleported, and Colonel Brice and co. can only hope that Jeremy rediscovers his ability before he ends up as a section eight. As to why Brice and co. want Jeremy to teleport again, and why they're so willing to believe he can, all is revealed at the end of the story. 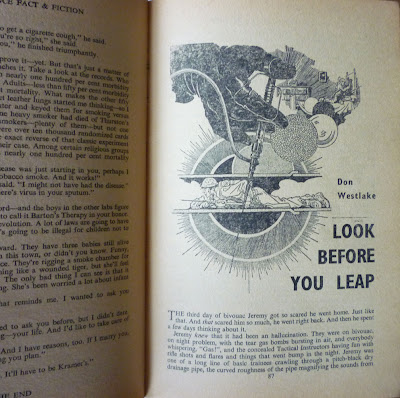 Certainly "Look Before You Leap" is a more sustained effort than "They Also Serve", perhaps because here Westlake has rather more room to properly explore his ideas. At one point he does something quite interesting with the notion of teleportation: he ties it to almost folkloric tales of people who report instances of their loved ones suddenly appearing before them at the exact moment that those loved ones are dying many miles away. Jeremy recalls his Aunt Sara and Uncle Fred; eight years ago Fred was killed in an airplane accident in the Rockies, and Sara insisted that at the exact moment Fred "was dying against that mountainside, she swore she saw him standing in the kitchen, right next to the refrigerator".

Say Uncle Fred was a latent teleport. He's sitting in the airplane, probably in a seat toward the rear of the plane, and suddenly the plane bucks and dips and dives straight for the mountain—he can look out the window and see that the right-hand wing has sheard off—and for the first time in his life he's in a situation desperate enough to reach all the way down to the teleporting ability, and he wishes frantically he were home in his own kitchen, raiding the refrigerator, and all of a sudden he's home. Which for shock value is about equivalent to kissing a girl who suddenly and instantaneously turns into a crocodile. So he teleports right back, while he still has his sanity. And the plane plunges into the mountain.

It's an intriguing idea, and actually the best part of the story; there are no real twists to the tale after this one, largely because Westlake presents a decidedly benign version of the US military. The ending in particular is notably upbeat; where another writer might have highlighted the potentially sinister implications of what Colonel Brice is up to, Westlake instead opts for a feelgood finish. Then again, maybe Westlake wanted his audience to read between the lines and draw their own conclusions. Or perhaps he just wrote the damn thing, sent it off, and cashed the cheque: one has to be reasonably circumspect in ascribing too much in the way of intent or motivation with these early SF stories, largely because back then Westlake was writing for whichever publications would have him in whichever genre they required.

In any case, "Look Before You Leap" is a solid entry in Westlake's select science fiction canon, certainly worth a read, although you'd have to track down a copy of the issue of Analog in which it appears in order to do so. Luckily, the next Westlake SF short I'll be reviewing is more readily available, as it was later reprinted in the 1989 collection Tomorrow's Crimes. But before we get to that, there's the final offering of signed editions I promised, comprising four books that are all very hard to come by in signed first, and consequently very valuable indeed. And the first of those is, appropriately enough, a science fiction novel... 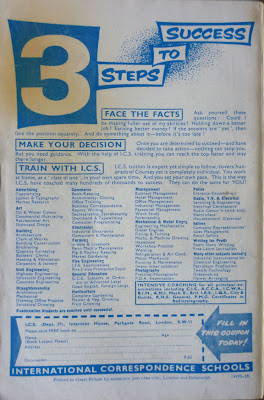