As promised, both on here and on The Violent World of Parker (and while I'm linking to that TVWoP post, let me just point out that Lawrence Block – yes, Lawrence Block – took the time to leave a comment on it, a turn of events as pleasantly surprising as it is humbling), this week I'm returning to the short stories Donald E. Westlake wrote for science fiction magazines in the 1950s and 1960s – which I first blogged about back in May of this year on Existential Ennui – with another series of reviews, this time of a clutch of tales from the early '60s. And it's a mixed bag indeed, with the stories ranging in length from four pages to well over thirty, and the subjects encompassing everything from bizarre military experiments, to philosophical musings on the nature of reality, to – as is the case with this first tale – a commentary on the then-prevalent Cold War paranoia. 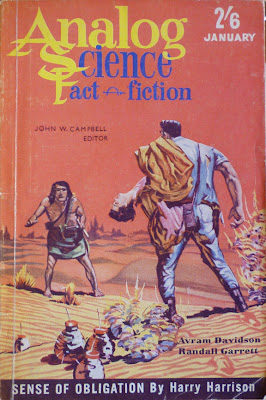 "They Also Serve" appeared in the Volume 68, #1 issue of Analog Science Fact & Fiction (cover art by H. R. Van Dongen), published in the States by Street & Smith in September 1961 – although the edition you can see here is the British one, published by Morrison & Gibb in January 1962 (UK editions of US science fiction magazines tended to lag behind the American ones by three or four months). The story centres on Ebor, the alien captain of a launch bringing mail and supplies to a remote colony on a small, rocky, airless moon – a moon orbiting a blue and green planet colloquially known as Earth. Ebor is met by his friend and colleague, Commander Darquelnoy, who fills Ebor in as to what the inhabitants of Earth have been up to – namely building an unmanned spaceship which has circled the Moon and taken pictures. This is the source of much consternation for the xenomorphic Moon colonists, who, it transpires, are waiting for humanity to destroy itself so that they can add Earth to their galactic empire. 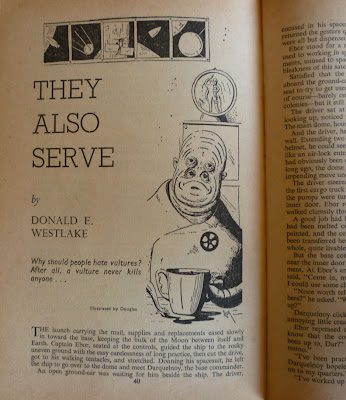 Needless to say, the anticipated method of mankind's demise provides the twist in this short tale, and considering Ebor and Darquelnoy spend the majority of "They Also Serve" discussing humanity's secretive, argumentative, warlike nature, you can probably work out what that twist is for yourself. (I guessed it fairly early on, and I'm no rocket scientist – hey!) It's a nice idea, but as is often the case with his brief SF stories, Westlake doesn't really develop it beyond a punchline. There's some noticeable papering-over of plot cracks, such as when Ebor and Darquelnoy debate why their alien society doesn't simply wipe humanity off the face of the planet rather than waiting for us to do it ourselves – their answer being, rather than fighting himself, man would instead turn his firepower on the aliens. Which sort of begs the question, if the aliens are powerful enough to travel across vast expanses of space, surely humanity's ire wouldn't trouble them unduly. (And destroying mankind themselves would, in any case, provide the end result the aliens are hoping for.)

But perhaps I'm overthinking things. (Now there's a surprise...) That "They Also Serve" doesn't stand up to close scrutiny is perfectly understandable in the context of it being a short story from early in Westlake's career – a time when he was writing whatever he could for whoever would buy – based on what was probably a passing notion. If you don't examine it in too much detail, it's an agreeable enough piece of whimsy. With their flapping tentacles and officious natures, the aliens are amusingly whiny, wearily resigned to humanity's unpredictable nature, and overall there's an attractive affability to the tale, offsetting the lurking Cold War unease that underpins events. Indeed, the obvious inference of a story like this would be that its author nurses a somewhat pessimistic outlook on mankind's ultimate fate, but this is Westlake we're talking about here, and so there's more than a hint of optimism to the ending, with the extraterrestrials hamstrung by bureaucracy and consequently forced to passively await a doomsday that may never arrive. Which, come to think of it, is a very Westlakean predicament.

To my knowledge "They Also Serve" has never been reprinted – although it is available on Project Gutenberg – and neither has the next Westlake SF story I'll be reviewing: a much longer and more serious effort from a 1962 issue of Analog, concerning US military psi-ops. But ahead of that on Existential Ennui, I'll have another signed association edition of a Gavin Lyall thriller...