After a brief intermission in the form of a Donald E. Westlake science fiction post (also available on The Violent World of Parker), it's back to British thriller writer Gavin Lyall, with the second of two signed association copies of his novels. And this one is from earlier in his career, actually towards the end of its first phase, when, you'll doubtless recall, Lyall was penning first-person adventures largely starring grizzled aviators. Except, this particular novel doesn't feature a pilot; instead, its protagonist is a freelance security consultant and occasional bodyguard who gets mixed up in a convoluted plot involving Lloyds insurance of ships. 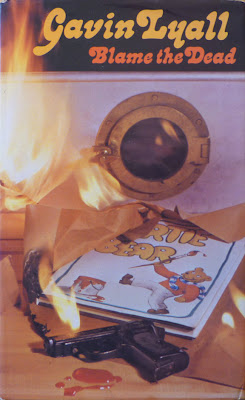 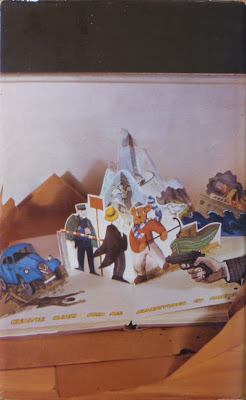 Blame the Dead was first published in hardback in the UK by Hodder & Stoughton in 1972 (not 1973, as Wikipedia states), under an intriguing dustjacket designed by Colin Andrews (I'll reveal what that jacket's all about in a moment). Now, I have to hold my hand up here and admit that I already own a copy of this first edition, bought at Camilla's in Eastbourne in May of last year; but when I spotted the one seen above on eBay recently and realised it had been signed and dedicated by Gavin Lyall himself – which, as I outlined in the previous Lyall post, is a real rarity – I couldn't resist nabbing it.

I'll return to Lyall's inscription shortly, but first, the book. Blame the Dead was Lyall's sixth novel, and the penultimate one to be written in the first person. Our narrator is ex-British Army intelligence man James Card, who, whilst acting as bodyguard for Lloyd's underwriter Martin Fenwick on a murky mission to Arras in northern France, comes under fire from unknown assailants. Cue one dead underwriter and the beginnings of a Byzantine mystery, as, experiencing guilt at his inability to protect Fenwick, Card takes it upon himself to find out why the Lloyd's man was killed, and why the hell he was taking what appears to be a copy of the Bertie Bear Colouring Book to France. (Now you see the significance of the dustjacket.)

The best thing about Blame the Dead is Card himself. He's what you might call a rough diamond: possessed of jagged edges that both his friends and adversaries find occasionally piercing, but essentially decent. Lyall's characterization of Card is surefooted throughout: his narration is wry and blokey, befitting his military background, and while in some respects he's quite the hard man – he exhibits a particular fondness for guns, for example – he's also pragmatic, loyal and warm (his relationship with Fenwick's son, David, who ends up hiring Card to find out why his dad was killed, is rather touching). But Card is no invincible hero, and he's certainly not much of a detective (something that more than one character remarks upon); he's slow on the uptake, never ahead of the game, and it's only his pig-headed refusal to quit that sees him through to the finish.

Lyall's also good on the intricacies of shipping insurance, which topic underpins the plot. The novel is actually quite instructive on how a big insurer like Lloyd's works; in a way these aspects are more interesting than the occasional bursts of action, which range across London and back and forth to Norway, as Card goes on the run from the authorities and the villains. And though Card is a largely agreeable creation, he's also something of a neanderthal in his attitude towards both women – at one point he muses, "Do you want to know why women will never rule the world? Because they can't be bothered to read a newspaper to find out if they've taken over the world" – and homosexuals. That latter flaw makes for some uncomfortable reading towards the end of the novel; a sign of the times, perhaps, but still a little quease-inducing.

Blame the Dead probably doesn't rank among the best in Lyall's canon, but it's a solid effort, well worth spending a few hours with. But of course, while the book might not be the most special of beasts, the copy I now own most certainly is, because of this: 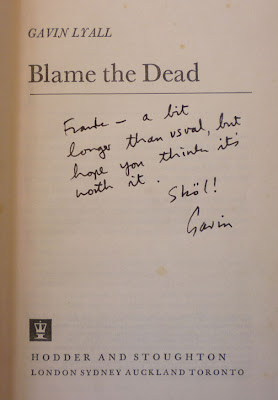 That "skol" is a reference to the novel's partly Norwegian setting, but unlike the other Lyall-inscribed edition I showcased on Monday, in this instance I have an inkling of who the book might have been dedicated to. In 1966 Lyall came up with the idea for a movie, which was eventually produced by Hammer and released in 1969 as Moon Zero Two. Lyall approached two old friends of his, Martin Davison and Frank Hardman, to help out on the writing of the storyline, and it's the latter of these that I suspect was the recipient of this copy of Blame the Dead. Obviously this is little more than conjecture on my part, but so far as I'm aware, Lyall only really signed copies of his books for friends – note that, as with that copy of Spy's Honour, he uses just his first name – so I reckon the "Frank" in the inscription has as good a chance of being Mr. Hardman as not.

Whatever the truth of the matter, in the course of researching the inscription I turned up a fascinating little nugget of information about a much earlier Lyall novel, an insight courtesy of Martin Davison which answered a question about the cover of the first edition of that novel I'd been pondering for some time. So before I move on to a signed edition from a different author, I should have a Gavin Lyall bonus post for you next – although, as is swiftly becoming the norm, there may well be a Donald E. Westlake post before we get to that...
Posted by Nick Jones (Louis XIV, the Sun King) at 07:54