Continuing my series of posts on signed first editions, this week I've got two books by the same author – a British thriller writer who's made multiple appearances on Existential Ennui over the years: Gavin Lyall. And my research for one of those books has turned up an interesting nugget of info about another of Lyall's novels, so there'll also be a bonus post on him. Plus there'll be some Donald E. Westlake business as well, as I return to the short stories Westlake wrote for various science fiction magazines in the early 1960s (which I'll be cross-posting on The Violent World of Parker, of course).

The unusual thing about both of the signed Gavin Lyall books I'm showcasing this week is that, so far as I've been able to establish, Lyall didn't appear to sign that many books. AbeBooks, for example, currently lists a grand total of just three signed Lyall books, which, considering he wrote fifteen novels and two non-fiction works over nearly forty years, and that many of those were bestsellers, is a remarkably small number. Those he did sign tend to be association copies, that is, books inscribed for friends; both of the signed Lyall novels I own bear self-evidently personal inscriptions – Lyall uses just his first name in each case – and I'd be willing to bet those scant few lurking on AbeBooks are association copies too. Which makes me wonder whether, gifts for friends aside, he simply didn't sign his books.

If that is the case, that makes the few that do bear his signature rather special. Like this one, which I picked up in the splendid Dim and Distant secondhand bookshop in Heathfield, East Sussex: 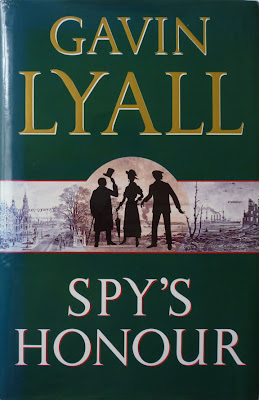 Spy's Honour was published by Hodder & Stoughton in the UK in hardback in 1993, with a front cover illustration by Bill Gregory. Now, it's worth noting here that Gavin Lyall's writing career can be divided up into three quite distinct phases. The first phase, from 1961's The Wrong Side of the Sky to 1975's Judas Country, consists of first-person aviation and Euro thrillers, largely – but not exclusively – starring hard-bitten freelance pilots; you can read my review of one of them, The Most Dangerous Game, here. The second phase, from 1980's The Secret Servant to 1988's Uncle Target, comprises a four-book espionage series starring 10 Downing Street troubleshooter Harry Maxim; you can read my review of the first novel in that series here. 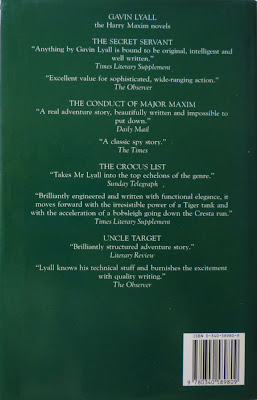 Spy's Honour marks the beginning of the third phase of Lyall's career, and of the three, this is the one era I've yet to explore properly. The four books Lyall had published from Spy's Honour to 1999's Honourable Intentions are all set in the run-up to the First World War, and deal with Britain's nascent intelligence service. If they were published today I suspect they'd do rather well, what with the ongoing vogue for historical fiction and interest in that period in particular in the wake of Keith Jeffrey's 2010 tome MI6: The History of the Secret Intelligence Service; but at the time I don't believe they were as successful as Lyall's earlier works, and consequently all four have fallen out of print and become quite scarce in non-ex-library first.

But this copy of Spy's Honour is even more special than most, because of what's on the front endpaper: 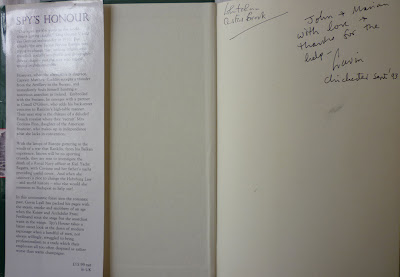 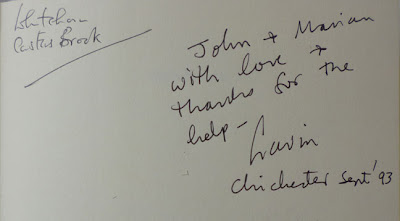 A "thank you" note from Gavin Lyall to a John and Marian. Bizarrely, there's also what looks to be an ownership signature opposite Lyall's inscription, which is a very odd thing to do when the book you own has been written in by its author. Perhaps the owner didn't realise it was Lyall's own hand, but I can be rather more confident in its authenticity because of the other signed edition I've managed to secure – a novel from towards the end of the first phase of his career. And that'll be coming right up after a Donald E. Westlake science fiction story...
Posted by Nick Jones (Louis XIV, the Sun King) at 04:05