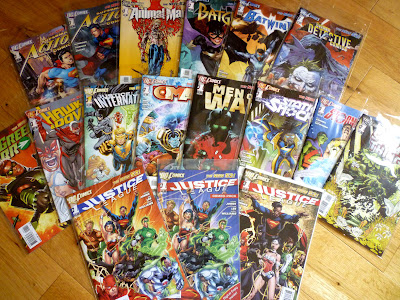 In 1973, Oxford University Press published a book by the American writer and critic Harold Bloom entitled The Anxiety of Influence: A Theory of Poetry. In the book, Bloom set out his thesis that poetry – and by extension art – is in perpetual conflict with its past, struggling to find the new whilst out of necessity being influenced by the old. In summary, artists are forever trying to be the same but different.

This, it seems to me, and without wishing to sound too high-minded, cuts to the root of the problem North American comics publisher DC Comics faces with "The New 52". For the uninitiated, this month DC are relaunching – or rejuvenating, or reinvigorating, or however you wish to term it – their entire line of superhero titles. What it boils down to is fifty-two (a number which has a certain resonance for DC fans) new #1s published across the four weeks of September, including the long-lived, never-renumbered Detective Comics (which, with an unbroken run from March 1937, is the longest continuously published US comic book ever) and Action Comics (an unbroken run from April 1938).

Ever since the initiative was announced back in June, the internet has been awash with commentary, conjecture, opinion, invective, bile and spleen. I actually began this post shortly after that announcement, but quickly realised that adding to the cacophony would be both pointless and fruitless; after all, there's little to be gained in passing judgment on something that hasn't even happened yet. However, this week saw the publication of the first wave of new DC #1s – following on from August's Justice League #1 – and as a longtime but these days largely lapsed DC reader, I was intrigued enough to purchase all thirteen titles. And reading those thirteen comic books, it's clear that Bloom's assessment is as pertinent to DC's admittedly commercial, pop cultural endeavours as it is to any form of art.

To my mind, the most successful of these initial DC #1s are those that best accommodate the past whilst finding new ways to tell stories with characters that in some cases have been around for over seventy years. Grant Morrison and Rags Morales's Action Comics #1, Jeff Lemire and Travel Foreman's Animal Man #1 and Tony Daniel's Detective Comics #1 all fall into this camp. Morrison's fresh interpretation of a brash, young Superman, at odds with the world and with a teenager's sense of injustice, still manages to reference key scenes and panels from the earliest days of Action Comics. Lemire finds fertile ground in Buddy Baker's family background – something Morrison also explored in his groundbreaking late-'80s run on the title – adding in an unnerving horror element, ably assisted by Foreman's expressive drawing. And while on the surface Daniel's Detective Comics #1 adheres firmly to the editorial direction of the non-Morrison Batman titles of recent years, his artwork has developed a visceral energy which sets his comic above most of the rest of this week's field.

The least successful DC #1s are those that appear to be in thrall to the past. It's been pointed out ad nauseum that although DC's superhero comics are all beginning again with new #1s, the creative teams are largely those who've been shepherding the titles for the past few years: Sterling Gates, J. T. Krul, Keith Giffen, Dan DiDio. But what's striking about Batgirl #1, Green Arrow #1, Hawk & Dove #1, Justice League International #1, O.M.A.C. #1 and Static Shock #1 isn't so much how similar they are to so many other comics published in the first decade of the twenty-first century, but how they could easily have been published in the final decade of the twentieth century (or even earlier in some cases). Electing to position these titles creatively circa 1995 – an aesthetically moribund period for superhero comics – is a bizarre choice, compounded by the fact that there's nothing terribly new to offset the old: to me they feel tired and workmanlike, and consequently dreadfully dull. If the remit is to refresh the DC line and thus attract new readers and bring back lapsed ones, these comic books fail miserably: reading them was an enervating experience, and one I have no intention of repeating.

Between these two poles lies a halfway house comprising Judd Winick and Ben Oliver's Batwing #1, Ivan Brandon and Tom Derenick's Men of War #1, Paul Cornell and Miguel Sepulveda's Stormwatch #1 and Scott Snyder and Yanick Paquette's Swamp Thing #1. For me, these were disappointing comics enlivened either by attractive art (Batwing, Swamp Thing) or potentially promising ideas (Men of War, Stormwatch). All are cognizant of the old, aware of the need to transcend it, and yet unable to locate the new. Where the best of this week's DC #1s are the same but different, and the worst the same but superannuated, these titles are, effectively, the same old shit. Or, perhaps more accurately: same shit, different day.

By my reckoning, that leaves me with three comics out of a total of thirteen that I'll be sticking with – which is around the same number of DC comics I was reading on a weekly basis anyway. But more than that, the experience of buying and reading all thirteen comics has soured me on doing the same next week: I suspect I'll be rather more selective in my choices come Wednesday. If Harold Bloom were a comics fan, and happened to find himself in Brighton midweek, I doubt he'd be rushing to Dave's Comics either.

UPDATE, 9/8/12: I considered writing an additional post to this one to mark the one-year anniversary of the DC New 52 – basically a "one year later" (arf) missive detailing which DC titles I'm still reading. Frankly, however, the notion was too depressing to countenance: the only DC comics I'm still reading at this point are Grant Morrison's Batman Incorporated – which essentially completely ignores the New 52 status quo – and James Robinson's The Shade, a twelve-issue maxi-series that again has no relation to the New 52. Even the once-promising Animal Man has become mired in an overlong storyline and now a crossover, and Nightwing, the one "old DCU" title I was guaranteed to buy, whatever the quality of the stories (sad, I know), has lost me too. Still, in truth, Marvel's output has been little better of late, and at least I'm saving myself some money (which I'm spending on old books instead).
Posted by Nick Jones (Louis XIV, the Sun King) at 08:32