And so we reach the grand finale of my month-long series on signed editions – which must surely rank as the longest (albeit intermittent) series of posts I've yet attempted on Existential Ennui. I suspect this particular theme has rather outstayed its welcome – it's beginning to try even my patience by this point – but at least there have been some interesting (well, to me) books along the way, among them novels by Anthony Price, Gavin Lyall, Stephen Baxter, Ross Thomas and Adam Hall. And for this climactic post, we return to a British author who's already featured once in this series, with the first of his novels starring Venetian-born, Rome-based police detective Aurelio Zen: 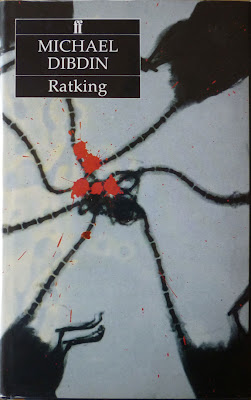 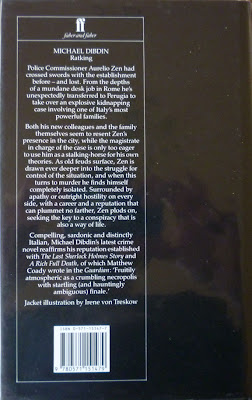 Michael Dibdin's Ratking was first published in hardback in the UK in 1988 by Faber & Faber, under a dustjacket sporting an illustration by Irene von Treskow. I skimmed the surface of Dibdin's canon in the aforementioned post on the eighth Zen novel, And Then You Die – and touched on the TV adaptations, too – and I'll be exploring Ratking in more depth in a moment. But first, this particular copy of the first edition, which I bought at the Lewes Book Fair in August.

First editions of Ratking – which, although the debut Zen novel, was actually Dibdin's third – are quite scarce and consequently rather pricey: the cheapest one on AbeBooks at present is listed at £150. But of course this copy isn't just a first edition: 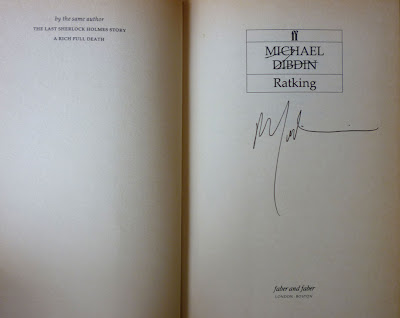 It's a signed first (with a "Z" scrawled across Dibdin's name on the title page), one of only two signed Faber firsts that I know of (the other being the one on AbeBooks, listed at £200). And there's an additional association with this copy: 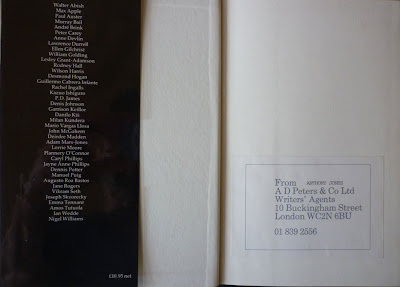 A bookplate affixed to the front endpaper, bearing the details of the literary agency AD Peters. Michael Dibdin's literary agent was the late Pat Kavanagh, who worked at AD Peters from 1964, so presumably this copy of Ratking is a file copy, which Dibdin evidently signed at some point. I suspect that signature is contemporaneous with publication; if we compare it to the one in 2002's And Then You Die: 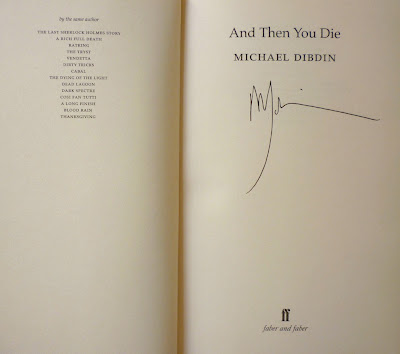 You can see that Dibdin's signature has changed in the intervening fourteen years, become more polished, although it's still recognizably the same hand.

In common with other Faber hardbacks from around this period, the pages of Ratking are starting to brown, a consequence of the cheap paper Faber used in their book production (the dealer I bought it from – for a very good price – remarked that he couldn't bring himself to collect Dibdin for this very reason), but that aside, it's in fine, unblemished condition. But there is one curiosity about the dustjacket spine, something I noticed when the book was sitting on my shelves, nestled next to its fellow first editions: 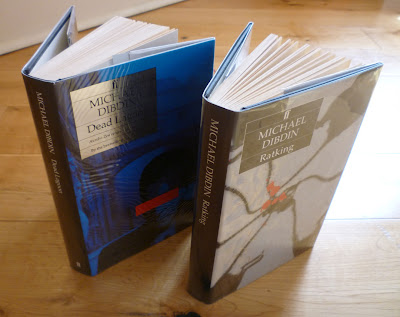 There's no publisher's logo at the base of the spine. That's highly unusual, typically the sort of thing you only find with book club editions – which this copy of Ratking isn't (I checked it against another copy online). An oversight by Faber's production department, perhaps?

Anyway, enough of this tiresome book collecting business: let's move on to the novel itself. And it's striking how elegant a writer Dibdin – who died in 2007 – was. His prose is descriptive, occasionally poetic, often wryly amusing, while his plotting is simultaneously languorous and labyrinthine, drifting and then surging, as, seemingly through sheer happenstance, Zen – fiftyish, divorced, with a similarly divorced American girlfriend of whom Zen's aged, dependent live-in mother disapproves – finds himself unexpectedly catapulted from the bureaucratic sidelines of the Italian police force – where he's languished for years as a result of events referred to obliquely (until towards the end of the novel, that is, when their real life significance is made more explicit) as the Moro kidnapping – into the centre of another kidnapping case, this one highly politically charged.

Uprooted from Rome and deposited in Perugia, Zen has to deal with the troublesome Miletti family – the disagreeable brood of the kidnapped Ruggiero, head of an electronics empire – as well as an indifferent local police force, obstructive lawyers, and recalcitrant criminals. Pulled along by the riptide of events, resigned to his fate, it's only in the latter stages of the story that Zen's copper's curiosity and eye for detail – dulled by his extended time-out cataloguing paperclips in police departments up and down the land – slowly return to him, as an appalling tale of murder and abuse is unfurled.

Zen is the beating heart of Ratking, both in the sense of being the lead protagonist, and in that he's a decent man surrounded by indecent creeps. Practically everyone he meets in Perugia is utterly unreliable (with the possible exception of his bored driver); the city is a tangled mess of power and corruption – the eponymous "ratking", a gruesome phenomenon which is explained midway through the novel. Zen's attitude towards all this is a mixture of resigned world-weariness, bemused detachment and hair-pulling exasperation. Late in the novel he muses on a Chinese fable his girlfriend once told him...

...about a man who falls off a cliff, saves himself by clutching at a plant, and then notices that two mice are gnawing away the branch on which his life depends. There is a fruit growing on the branch, which the man plucks and eats. The fruit tastes wonderful.

Having finally comprehended the point of this story, Zen walks into his office and is handed a file on the Miletti case by a subordinate, a file which can only be read on a computer. Except the department doesn't yet have a computer:

Zen passed one hand across his forehead. There were clearly various possibilities which the Chinese hadn't thought of. For example, the mice stop gnawing, scamper down your arm, cock their legs and piss in your face.

It's a typically acerbic punchline from a writer well aware of the contradictions and stupidity inherent in the human condition, and yet offset by a lead character who in many ways embodies the opposite – who defies those tendencies, however unintentionally or reluctantly.

I'll have more from Michael Dibdin before too long, in the shape of a Zen first edition cover gallery. But next on Existential Ennui, it's a case of from the sublime to the ridiculous, as over the weekend I'll hopefully find the time to share some thoughts on week one – or is it week two? – of DC Comics: The New 52. And then after that, from Monday, it's back to the sublime, with John le Carré/George Smiley Week...
Posted by Nick Jones (Louis XIV, the Sun King) at 04:48