For this penultimate post in my seemingly interminable series on signed editions, we turn to an author who I featured in another series of posts back in July: Elleston Trevor, and the second of his pseudonymous espionage thrillers starring secret agent Quiller: 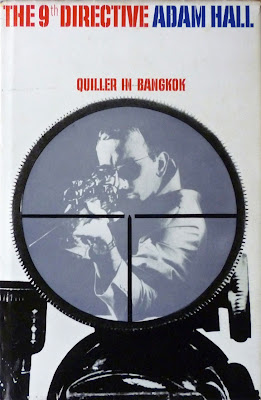 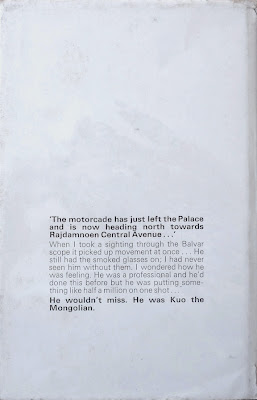 The 9th Directive was first published in the UK in hardback by Heinemann in 1966, under a dustjacket designed by Tom Simmonds (featuring a front cover photo by the almost identically named Thomas Simmons, natch). It is, as I say, the second of Trevor's Quiller novels – although actually the third novel written under the Adam Hall alias (the first being the 1963 Quillerless outing The Volcanoes of San Domingo) – and sees our surname-only spy engaged in a duel with the colourfully monikered Kuo the Mongolian. I've yet to read the novel, but I have read its excellent 1965 predecessor, The Berlin Memorandum (a.k.a. The Quiller Memorandum), my review of which can be found right here.

Friend of Existential Ennui and noted contemporary spy fiction author Jeremy Duns has read The 9th Directive, however; Jeremy identified Adam Hall as his favourite writer – and The 9th Directive as perhaps his favourite book of the Quiller series – at the start of this interview with Trevor's son, JP, so this particular copy of the first edition should be of interest both to Mr. Duns and to my new associates on the Quiller Yahoo Group. Because affixed to the front endpaper is this: 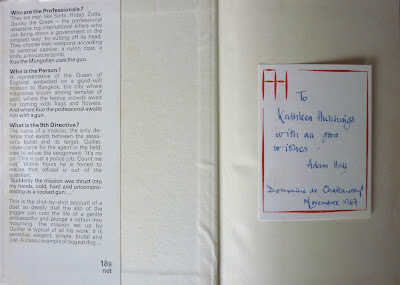 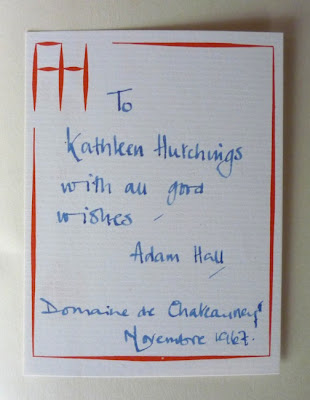 An Adam Hall bookplate, signed and dedicated by Trevor as Hall, and addressed from Domaine de Chateauneuf, near Nice, where Trevor lived until 1973 – although I believe he kept his house in France even after moving to America (correct me if I'm wrong, Quiller aficionados). And it's contemporaneous too, as evidenced by the "Novembre 1967" date.

I spotted this copy of The 9th Directive tucked away on Amazon Marketplace, and didn't have to pay through the nose for it. Which was something of a surprise, as there are currently only eleven signed Adam Hall books on AbeBooks, just five of those being Quiller novels (the remainder largely comprising reissues of the novels Trevor wrote as Simon Rattray – which were reprinted as by Adam Hall in the 1970s – along with a couple of copies of his 1979 horror work The Sibling). And among those five, The 9th Directive does not appear. The closest comparison would be the signed first edition of The Berlin Memorandum, which is on sale for £225 from the States. So your guess is as good as mine as to the value of my copy of The 9th Directive.

There's a minor postscript to this Quiller tale, because just the other day I was browsing in one of Lewes' (the East Sussex town etc. etc.) charity shops – the Hospice one opposite Waitrose, in fact – when I came across this nestled in amongst the secondhand hardbacks: 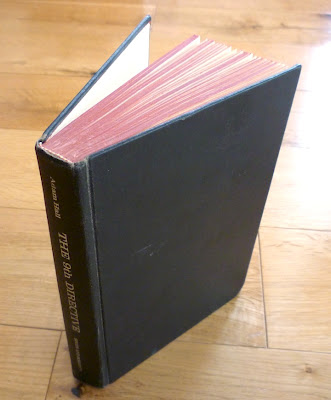 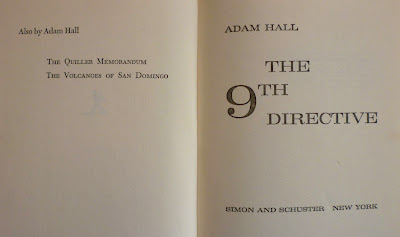 An American first edition/first impression (I believe the US first went through three printings) of The 9th Directive, published by Simon and Schuster in 1966. It was lacking a dustjacket unfortunately, but seeing as it was only 75p, I figured I might as well nab it. The aforementioned Jeremy Duns told me on Twitter that it's this edition of the novel that he owns – with jacket – and together we spent a moment admiring its scarlet publisher's-stain and deckled page edges. (I'll make a book collector out of Jeremy yet, just you wait and see.) 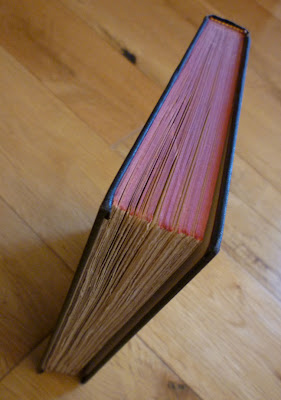 Anyway, I'll have more from Adam Hall and Quiller further down the line, notably on the scarce, later British first editions of the books in the series. And don't forget that next week's blogging will all be on an espionage tip, as I embark on a series of posts on John le Carré's George Smiley novels – chiefly the "Karla Trilogy" – in celebration of the release of the brand new movie adaptation of the first book in that trilogy, Tinker, Tailor Soldier, Spy. But ahead of that, I've one last signed book post for you – the grand finale, if you will – for which I'll be returning to a crime fiction author who's already made one appearance in this series on signed editions, with a very special first edition of his third novel...
Posted by Nick Jones (Louis XIV, the Sun King) at 05:15