Back in May of this year, I posted a series of reviews on Existential Ennui of some of the short stories Donald E. Westlake wrote for American science fiction magazines in the 1950s and '60s (along with a bibliography of those tales). Some of those stories were later collected in book form – notably in 1989's Tomorrow's Crimes – but many have never been seen since. Now that I'm blogging over on The Violent World of Parker, I'll be returning to Westlake's SF stories in another series of posts starting next week – in amongst the still-ongoing Existential Ennui posts on signed editions, that is – with a handful of further futuristic tales dating from around 1962. 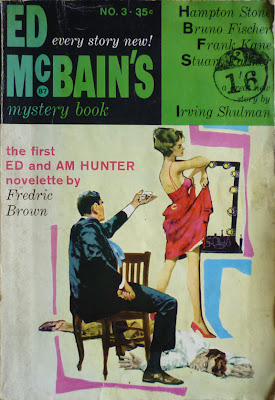 But in the midst of my feverish online quest for old science fiction magazines, I turned up something by Westlake that wasn't science fiction, or crime fiction – or even fiction for that matter: an obscure essay in a short-lived crime story magazine; an essay which, while not an essential piece of the Westlake puzzle, is still interesting for how it represents a little-examined aspect of the great man's writing career. 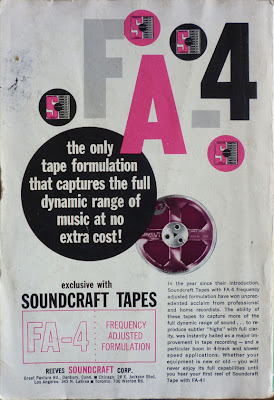 Westlake didn't write a hell of a lot of non-fiction, at least not compared to the reams of fiction he bashed out over the years. There's his 1972 book-length account of the 1969 British invasion of the Caribbean island of Aguilla, of course (Under an English Heaven), and his earlier pseudonymous biography of Elizabeth Taylor (which Trent blogged about on TVWoP just the other day). Alongside those, the "official" bibliography on his website lists just six other non-fiction articles, two of those being forewords or introductions to books. But in fact, Westlake did pen a number of other non-fiction pieces besides, certainly more than that abbreviated biblio suggests. There was a 1971 feature on Aguilla for The New York Times (perhaps the inspiration for Under an English Heaven); a piece titled "Love Stuff, Cops-and-Robbers Style" that same year in The Los Angeles Times; an article titled "Discovering Belize" in 1984, again for The New York Times (and possibly an earlier one in 1982, comparing the situation in Belize at the time to that of the Falkland Islands); and a handful of other essays as well. Including, in 1961, this: 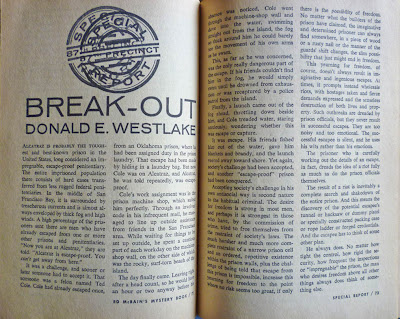 "Break-Out" appeared in the third and, as it turned out, final issue of Ed McBain's Mystery Book, published by Pocket Books in 1961. A digest-sized newsstand collection of mostly short stories and novelettes, this particular issue featured fiction from, among others, Frederic Brown, Irving Shulman, and an early short by Lawrence Block: 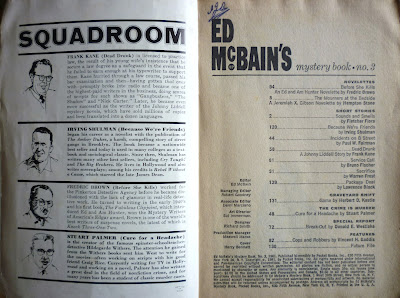 Halfway through the magazine, however, comes "Break-Out". Essentially it's an overview of factual prison escapes, some well-known, others more obscure, from twentieth-century Alcatraz escapee Ted Cole to eighteenth-century English highwayman and repeat prison-buster Jack Sheppard. Jailbreak by jailbreak, Westlake details each escape and then examines how successful each escapee was in staying out of jail. Indeed, it's the aftermath of the breakouts which become the article's focus as it develops. As Westlake observes, few planned for what they'd do once they were free, and consequently swiftly ended up back inside.

But Westlake makes the larger point that there seems to be a correlation between how hard jails make it for inmates to escape, and how determined certain inmates become to meet that challenge. As he writes in the article:

Here is the core of the problem. The tougher the prison officials made their prison—the more they challenged Sheppard and told him that this time he couldn't escape—the more determined and daring and ingenious Sheppard become.

It's a fascinating little piece, and though I don't think one could draw any direct parallels with Westlake's fiction – the later Richard Stark Parker novel Breakout, for example (title and general theme aside) – it's evident that prison breaks were a subject Westlake was genuinely interested in himself, rather than something he wrote about simply for a paycheck. In fact, looking at his relatively small body of non-fiction overall, I reckon you could say the same about all of it: when he chose to wrote factual pieces, it was first and foremost because those subjects interested him. In that way, they perhaps reflect more of the man behind the words than many of his stories do.
Posted by Nick Jones (Louis XIV, the Sun King) at 04:33