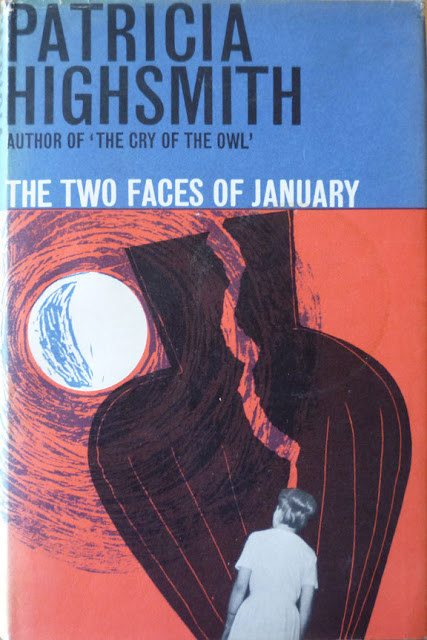 The Two Faces of January was first published in hardback in the UK in 1964 by Heinemann – originally published that same year in the US by Doubleday. This time the story revolves around Chester MacFarland and his wife Colette, ostensibly holidaying in Athens, although in reality Chester has found it necessary to get out of America for a while due to his dodgy business dealings. Also in Athens is Rydal Keener, a chancer looking for adventure. The MacFarlands' and Rydal's paths cross when a Greek policeman, acting on information from the States, confronts Chester in his hotel room. The two fight, and Chester accidentally kills the policeman. Rydal, who already has Chester and Colette marked as interesting prospects for excitement, happens to be in the corridor, and helps Chester stow the body in a store-room. 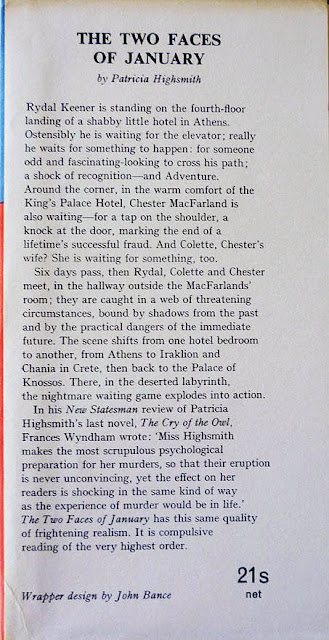 From there the action ranges across Greece and Crete, as Rydal, Chester and Colette try and stay one step ahead of the law and jealousy and animosity develops between the two men – that familiar Highsmith theme of a weird fascination between two male characters again – with Colette caught in the middle. As is often the case in Highsmith's novels, there are no heroes here; Chester is (rightly) suspicious of Rydal's motives, especially in relation to Colette, while Rydal is sly and manipulative. I think that's possibly why The Two Faces of January didn't quite make the impact on me that The Cry of the Owl did; one should always be wary of seeking likable characters in a novel, but it helps to be able to relate to or at least have some small sympathy with one protagonist, and that's tricky in The Two Faces of January.

Of the triumvirate, Rydal is the easiest to empathize with, but whereas, say, Tom Ripley displays the qualities of loyalty to his friends and a singular (if admittedly self-centred and occasionally criminal) pursuit of more cultured climes, which helps to offset his lack of conscience and murderous tendencies (a bit), Rydal seemingly has no goal except to fuck up Chester's life and steal his wife. Mind you, he does share Tom's bravery and resourcefulness in the face of adversity, and as the novel develops, his ultimate aim becomes a quest for vengeance and justice, which is perhaps more understandable given the circumstances. 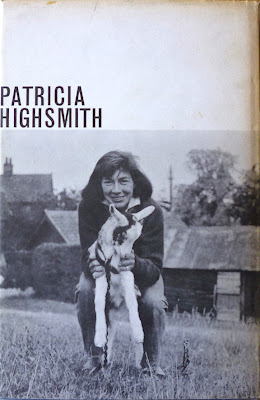 I mentioned in yesterday's post that The Two Faces of January features an aspect of Highsmith's work that offers an insight into her personal life, which is her interest in foreign climes, particularly Europe. Roughly half of Highsmith's twenty-two novels are set outside the United States – all five of the Tom Ripley books are largely set in Europe, for example – while from 1963 – just before The Two Faces of January was published, in fact – Highsmith herself lived overseas, in France, Italy, Switzerland and the UK. This might go some way to explaining why her work was – still is – more popular in Europe than in America, although the reverse could also be true: she may well have based many of her stories in Europe precisely because she lived there and found greater acclaim there. Certainly she took a dim view of America, although it could be argued that she eventually came to take a dim view of pretty much everything. Whatever the case, it's notable that in the latter stages of her career her novels were invariably published in the UK before they debuted in the States.

And we'll be staying overseas for the next post in this series, as I take a look at Highsmith's most famous novel – which boasts the debut of the aforementioned Mr. Ripley – in an intriguing and incredibly scarce British hardback edition...
Posted by Nick Jones (Louis XIV, the Sun King) at 07:04