Let's round off this short, sporadic run of vintage Penguin paperbacks with an iconic edition of an iconic work of fiction: 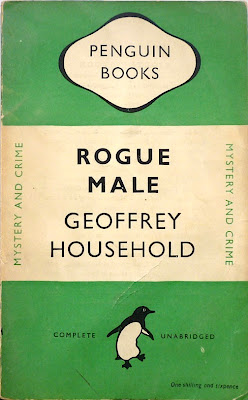 The 1949 first Penguin printing of Geoffrey Household's Rogue Male, originally published in hardback by Chatto & Windus in 1939. As with the Penguin paperback of Kingsley Amis's Lucky Jim, this particular edition has appeared on Existential Ennui before – more than once, in fact – but not, I hasten to add, this particular copy. Because for reasons far too tedious and testing to go into I've ended up with two copies of the Penguin first edition: the one seen in this post, which is a recent acquisition, and the one seen in this 2010 review. Ridiculous really, but at least it gives me the excuse to dedicate a post to what is an uncommon edition (despite appearances to the contrary; at time of writing I can't see a single copy of the 1949 Penguin printing on AbeBooks) of a brilliant book. 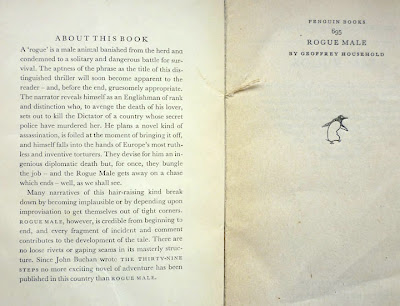 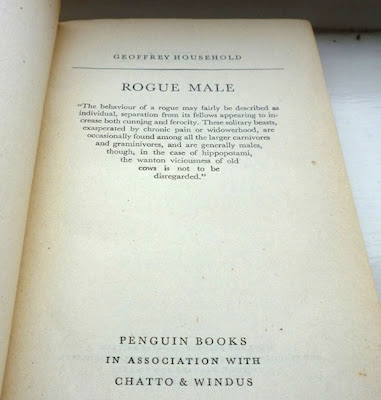 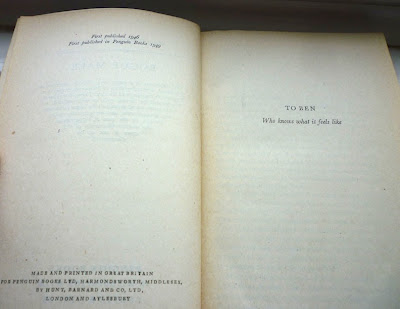 Of course, the novel itself already has a dedicated post on Existential Ennui, in a 1939 Chatto & Windus Services Library edition; if you've a mind to, you can read that or my 2010 review – or indeed this post on the 1982 sequel, Rogue Justice – for my thoughts on it. But I'd direct you instead to this more recent Guardian piece on the book by the travel writer Robert Macfarlane. When I came across it in the Review section of the paper the other week it was an unexpected delight; an edited version of Macfarlane's introduction to Orion's new edition of Rogue Male, it covers, as Macfarlane himself says on Orion's Murder Room website:

...its cult status, my own relationship/history with it, my visits to its landscapes, my tracking of Household's hero, Household himself, the book's qualities and histories and interests, why it compels (and survives) and why it is still read – and still should be read – now, more than seventy years after it was published.

I was especially struck by Macfarlane's pilgrimage to what he'd been led to believe was the Dorset "holloway" in which Household's initially nameless hero – later christened Raymond Ingelram in Rogue Justice – literally goes to ground in order to elude his pursuer, the cunning Major Quive-Smith. It's this part of the novel that I found the most affecting, not to mention alluring: a retreat into a primitive rural idyll, one which for me exerts a powerful appeal. Many others of Household's novels have a similar rustic fascination (A Rough Shoot springs to mind), something that Macfarlane touches on when he mentions on the Murder Room site that "Household has been, in his odd way, at the heart of my writing for years now." 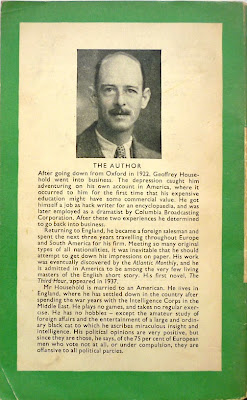 And as luck would have it I have another Household novel lined up for my next post, in which I'll be revisiting what has become by far the most popular post or page on Existential Ennui: Beautiful British Book Jacket Design of the 1950s and 1960s.
Posted by Nick Jones (Louis XIV, the Sun King) at 10:10