Next up in this week of posts on Patricia Highsmith, this: 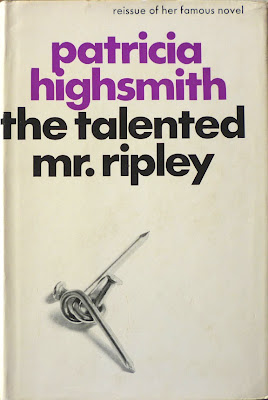 And what, pray tell, is it? Well, it's the 1973 hardback of The Talented Mr. Ripley, published by Heinemann in Britain as part of their Highsmith "uniform edition" series, and it's a very curious thing indeed. See, here in the UK, The Talented Mr. Ripley – Highsmith's third novel under her own name – was first published in hardback in 1957 by the Cresset Press, following the American Coward-McCann first edition in 1955. Numerous British paperback editions then followed, kicked off by what I believe was the first UK paperback edition, the 1960 Pan softcover, a copy of which I just happen to own: 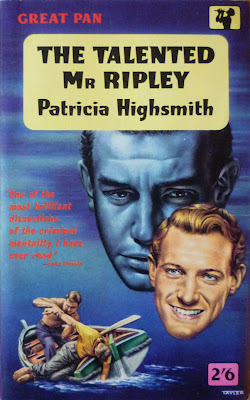 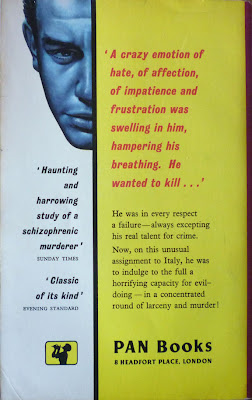 Gorgeous David Tayler cover art there. But as well as the various paperbacks, there was also the odd additional hardback, too. Because although Cresset published Highsmith's initial few novels in hardback, Heinemann took over the first publishing rights with her fourth (fifth if you count the pseudonymous The Price of Salt), 1957/58's Deep Water. And once the UK hardback rights had reverted on The Talented Mr. Ripley – publishing rights periods tending to last between seven and nine years – Heinemann issued their own hardback edition of the novel, in 1966. This isn't that edition, however; I've never even seen a cover of the '66 Heinemann hardback, and the only copy listed on AbeBooks is an ex-library copy priced at the ridiculous sum of £2,000 – more than twice the price of the Cresset first! No, this is the 1973 reprint of that '66 edition:

And according to the back cover of this edition of Talented, a good number of Highsmith's other novels from the 1950s and '60s were also issued in Heinemann's uniform edition in the 1970s: 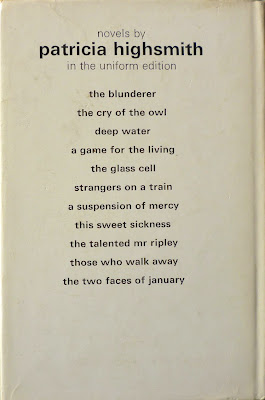 Presumably they were published in similar dustjackets – certainly 1967's Those Who Walk Away was reissued around the same time, with a jacket that closely resembles the one for Talented (which I suspect has never been seen online before now). Anyway, while the 1966 reissue of Talented is beyond my reach, I did strike it lucky on Amazon Marketplace and snaffle the '73 reprint – the only one I know of for sale online. (I do know of one other copy, which isn't currently listed anywhere, but I also know that copy is rather tatty, having ordered it myself believing it to be the 1966 edition, only to discover it was mistakenly listed as such and that it was in fact the 1973 edition again, at which point I promptly returned it.) And since I have all the other Tom Ripley novels in Heinemann hardbacks (first editions, naturally), it's entirely agreeable to have the first Ripley outing in hardback as well.

I'll have more on Mr. Ripley later in the week, and I'm planning on properly revisiting each of the five Ripley novels in another series of posts in the future. But next up this week, a lovely British first edition of one of my favourite non-Ripley Highsmith novels, one which is unusual in that it features three men who become strangely fascinated by one another instead of the usual two, and while there is a death – possibly two – there's no murder to speak of...
Posted by Nick Jones (Louis XIV, the Sun King) at 05:31