This, it turns out, will be the final post in Patricia Highsmith Week; I do have one other fairly recent Highsmith acquisition, a short story collection, but I haven't read it yet, and I think I'd struggle to say anything about its background or cover design, chiefly because there's no design credit on the dustjacket and, well – I haven't read it yet. So instead let's round things off with this: 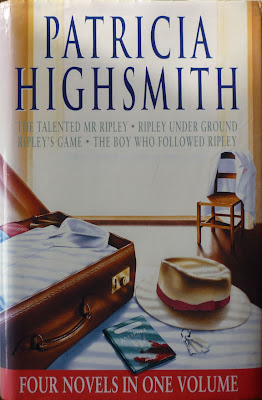 This is a UK hardback omnibus of four of the five Tom Ripley novels, published by Chancellor Press in 1994. The only one excluded is the final book, Ripley Under Water, although I'm not sure why that is; that novel, the last of Highsmith's works to be published in her lifetime (she had one final book, Small g: A Summer Idyll, published posthumously in 1995), debuted in 1991 (at least in Britain; in the States it didn't appear until the following year), so it could've easily made it in. In any case, there have been a handful of omnibus editions of the Ripley stories over the years, but most of them only contain three of the novels; the only one that doesn't is the 1992 Penguin edition, which contains the same stories as the Chancellor Press hardback. That Penguin collection, however, is a paperback, so for my money, the Chancellor Press omnibus is the best bet if you fancy a great big wedge of Ripley. 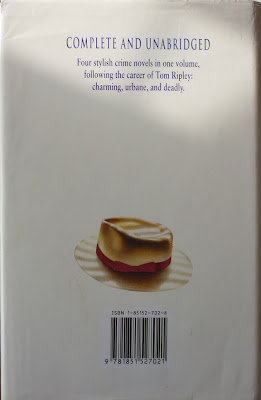 The cover design is by Button Design Co, but the illustration is by Mark Taylor, who I've blogged about before: he created the cover illos for the UK first editions of Elmore Leonard's two (so far; Leonard's working on another) Raylan Givens novels, Pronto and Riding the Rap. As to why I acquired this omnibus when I already own copies of all of the Tom Ripley novels... y'know, I'm not entirely sure. I think I was just intrigued by it when I saw it online and fancied having a look at it (and blogging about it, obviously). I suspect I'll release it into the wilds of Lewes's charity shops once I'm done with this post (so keep 'em peeled, fellow Lewesians), but it does at least give me the opportunity to write about Ripley again, something I never tire of doing.

See, I love Tom Ripley. I love Ripley as a character, and I love the books in which he appears. The best of the five novels, at least in my opinion, is 1974's Ripley's Game, but they all have their merits, and anyone thinking of reading them should put no stock in the received wisdom that the first one, 1955's The Talented Mr. Ripley, is the best one and that it's a law of diminishing returns thereafter. Nothing could be further from the truth. In fact, if I were to rate each of the novels out of 10, and then chart them on a graph, that graph would look something like this: 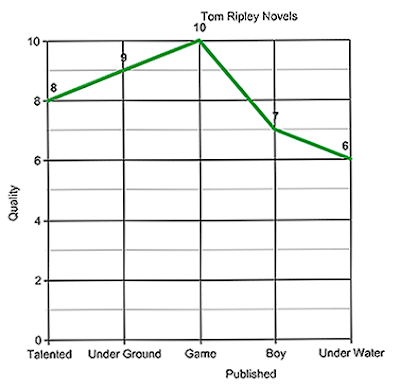 You'll see there that we start fairly high with The Talented Mr. Ripley – it is, after all, a fine novel – then move up a notch for 1970's Ripley Under Ground; hit the high water mark with 1974's Ripley's Game; and then there's a fairly steep decline towards 1980's The Boy Who Followed Ripley and 1991's Ripley Under Water, although those last two still sit at 7/10 and 6/10 respectively. I realise this won't tally with everyone's assessment of the Ripley novels, but if you approach them with an open mind, I think you'll find that Tom is at his very best – most fascinating, most bizarre, most compelling – in Ripley Under Ground and Ripley's Game, and that, structurally, and in terms of story and the moral quandaries at its heart, Ripley's Game is the Ripley novel supreme.

There's so much to explore and discuss with the Ripley novels. For me, Tom becomes more interesting once he's ensconced in rural France as of Ripley Under Ground, having achieved his goal of a comfortable, cultured existence, and yet still drawn to the dark. Looked at as a part of Highsmith's wider body of work, it's notable that her familiar device of having two male protagonists becoming unhealthily fascinated by and intertwined with one another is also present in the Ripley novels, with the possible exception of Ripley Under Ground; indeed Ripley's Game could be said to be the ultimate expression of this, dividing its time between Tom and the hapless Jonathan Trevanny. And then there's Tom himself, about whom one could sermonise – or possibly evangelise, or perhaps even rhapsodise – endlessly, from the dichotomy of his manipulative nature versus his unexpected loyalty and bravery, to his eventual body count throughout the books (not as great, nor always as indefensible, as you might think).

In fact, there's so much to examine, scrutinise and mull over with the Ripley novels that one could write a whole series of posts on each of the books. So that's precisely what I will be doing before too long, taking each book in turn and really digging into them to identify themes and try and work out exactly who Tom Ripley is. That's for the future, however; for now I'm afraid that's all from Patricia Highsmith... and indeed that's nearly all from me, because Existential Ennui will be going on its summer holidays for a week or so. But I do have one last post for you before I depart, a little tease of things to come on this blog, plus a bit of housekeeping. Look out for that over the weekend...

UPDATE, 22/4/13: Unusually for me, I actually made good on my promise and reread each of the five Ripley novels, after which I revisited the Tom Ripley Graph; the results can be found here.
Posted by Nick Jones (Louis XIV, the Sun King) at 05:48