The last few posts here on Existential Ennui have all been espionage-themed – being, as they were, on Len Deighton's "Harry Palmer" novels – and as it 'appens, the next few posts will be, too. Except, rather than looking at espionage fiction, I'll be looking at some spy fact, as I embark on a week's worth of blogging about various non-fiction titles I've picked up in Lewes (the East Sussex town where I live and work) and the surrounding area (for the most part, anyway). And we begin with a book I bought for four quid in Colin Page Antiquarian Books in Brighton (which is about eight miles from Lewes for the geographically inclined, and is where I also nabbed a couple of those Deighton novels): 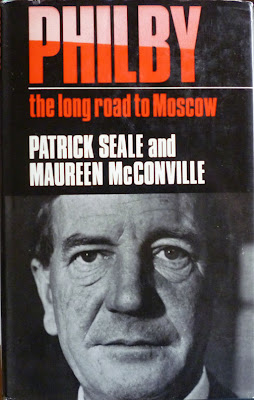 This is the 1973 Hamish Hamilton UK hardback first edition/first impression (the hardback went through a couple of printings and a book club edition) of Philby: The Long Road to Moscow. Written by British journalists Patrick Seale and Maureen McConville, it's a thorough account of notorious spy Kim Philby's life and career, published ten years after Philby's defection to the USSR. Now, there have, of course, been umpteen books about Philby over the years – Philby himself even wrote one after he defected – but this one looks reasonably authoritative. Seale and McConville assisted Eleanor Philby on her 1968 memoir of her husband, The Spy I Loved (keep that one in mind, folks...), while Seale met Kim Philby in Beirut in 1960 and subsequently inherited Philby's Middle East correspondent appointments for The Observer and The Economist in 1963 after Philby fled to Moscow. Indeed, there's a photo inside The Long Road to Moscow showing Philby at a Beirut cocktail party: 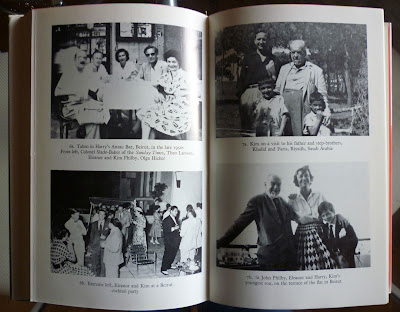 Not to mention a number of other fascinating pictures, including an excerpt from Philby's childhood diaries and a page of notes from his Cambridge days: 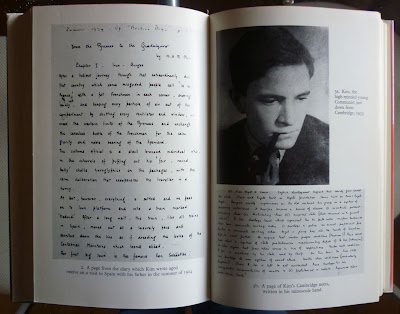 I've blogged about Kim Philby before – tangentially in this post on John le Carré's Tinker, Tailor, Soldier, Spy, more explicitly in this one on Alan Williams's 1974 book, Gentleman Traitor. Gentleman Traitor was a novel, however (although not an entirely fantastical one: Williams also knew Philby, as Michael Barber revealed in the comments on that post), whereas The Long Road to Moscow is a factual account, and a seemingly respected one at that. Although perhaps not by Philby himself: Soviet double agent Oleg Gordievsky once sent a copy of the book to Philby, who returned it to Gordievsky bearing the inscription, "To my dear colleague Oleg: Do not believe everything you see posted up on me!" But it does have that great photo of Philby on the front of the Jeanne Cross-designed dustjacket, which was taken by famed Observer photographer Jane Bown.

All being well I'll be returning to Kim Philby later in the week. But next in this week of non-fiction firsts: from a master spy, to a catcher of spies...
Posted by Nick Jones (Louis XIV, the Sun King) at 07:29