The previous post in this series on a bunch of espionage-related non-fiction books I've bought in various Sussex (and elsewhere) locations fairly recently was on a biography of master spy Kim Philby; now it's the turn of an autobiography by a hunter of spies – one which does, in fact, feature the aforementioned Mr. Philby:

This is the US first edition/first impression hardback of Spycatcher by Peter Wright, published by Viking/Penguin in 1987. I got this in a charity shop in Eastbourne (for a quid) on my birthday day out back in March; the shop assistant had only just stuck it on the shelf, so I was quite chuffed to be able to grab it, because although copies of Spycatcher are abundant in charity shops and bookshops, first printings are less so – the US first edition went through at least nine printings that I know of. So how come? And why an American edition rather than a British one?

Well, Spycatcher, you may or may not recall, was banned by the British government in 1985 when Wright first attempted to publish it. Wright was a former Assistant Director of/counterintelligence officer in MI5, and the book was a candid account of his time in the secret services, including his (and others') suspicions about the "fifth man" in the Cambridge spy ring (which included the aforementioned Philby), who Wright identified in the book as Sir Roger Hollis, head of MI5. Under Prime Minister Margaret Thatcher the Conservative government successfully managed to stop its publication... but only in England. Despite their further attempts to stop the book being released in Australia, it was published over there, and in the States. (There's a good summary of the various legal shenanigans here.)

Consequently the only copies of the first edition available were overseas ones, which went through multiple printings. So it was nice to lay my hands on a first printing of the American first edition: 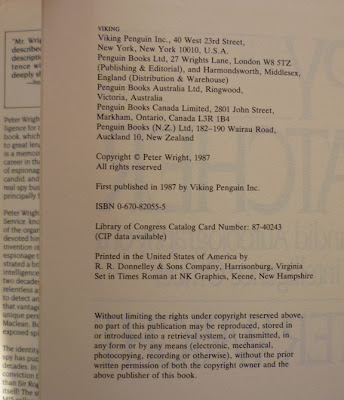 Even though the true first edition is recognised as being the Australian one, which was printed in Dublin and available in the UK for a single day before the injunction against the book came into effect. (The interior photos in that true first were omitted in the rush to print the thing.) Interestingly, later printings of all editions featured a change to the front cover: the addition of a co-writer credit, one Paul Greengrass, who was, back then, a journalist but who is rather better known these days as the director of two of the Bourne movies.

I haven't read Spycatcher yet, but my estimable colleague and friend Roly Allen (whose birthday I believe it is today – happy birthday, mon frere) has, and reckons it's one of the best books he's ever encountered. High praise indeed. Anyway, next up: from a former spy, to the creator of perhaps the most famous spy on the planet...
Posted by Nick Jones (Louis XIV, the Sun King) at 05:08