If you've checked in on Existential Ennui over the past day or so you might have noticed some odd things occurring, chiefly that last post on Eleanor Philby's The Spy I Loved appearing on Thursday, then disappearing, then eventually reappearing late on Friday. Reason being, Blogger were pissing about with their system and managed to crash the whole thing, deleting a day's worth of everyone's posts in the process. They'd promised they'd restore them all, but all I got back was a much, much earlier, quarter-written version of that post. Luckily I'd saved a later version of it elsewhere, so I managed to reconstitute it without too much trouble, but it was a frustrating experience nonetheless, particularly the distinct lack of information coming from Google/Blogger. Time to switch to WordPress, perhaps...?

Anyway, I mentioned at the end of that previous post that I thought I might find time to squeeze in one last non-fiction book, and so I have: 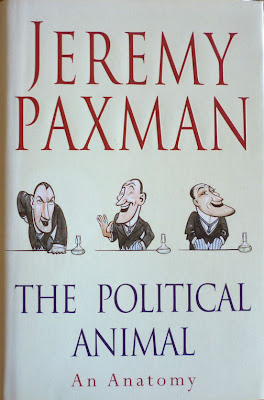 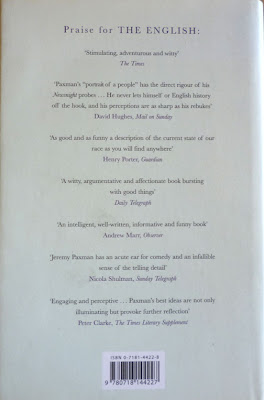 This is the UK hardback first edition/first impression of The Political Animal, published by Michael Joseph in 2002 (featuring a detail from H. M. Bateman's A Speech About the Government on the front cover). Its author, Jeremy Paxman, will be well known to British readers, but for our overseas friends: Paxman is a journalist and broadcaster who helms BBC2's daily in-depth news magazine Newsnight, and makes the occasional factual series, too. He has a well-earned and well-deserved reputation as a fearsome interviewer: in a 1997 interview with the then-recently departed Home Secretary, Michael Howard (no relation), he famously asked Howard the same question (or variations on it) fourteen times.

He's also, obviously, an author, having written enjoyable books on the English (The English: A Portrait of a People, 1999) and the monarchy (On Royalty, 2006), among other subjects. I've read a couple of his books, The Political Animal being one of them, which I dipped in and out of over a long period in a paperback edition. And it is, in truth, the kind of book you do put down and return to; it's more a collection of long essays than one long narrative, leaping back and forth through British history as it charts the course of a politician's career from youthful idealist to newly elected MP, then government minister and eventually has-been. But Paxman's characterizations of politicians and insights into their motivations are sometimes amusing, sometimes revealing, and certainly informed by long experience.

So, if I've already read The Political Animal, what made me buy this copy (from the Hospice charity shop down near the Lewes branch of Waitrose)? Quite simply, this did: 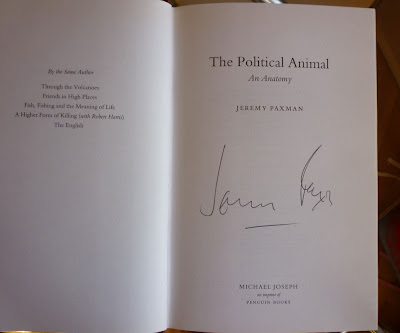 It's signed by Mr. Paxman, which, combined with the fact it's a true first, makes it quite appealing to anyone who happens to be both a political junkie and a bibliophile. Which is to say: me.

And that really is that for the non-fiction first editions. Next: P. M. Hubbard...
Posted by Nick Jones (Louis XIV, the Sun King) at 05:55