After yesterday afternoon's brief interlude/announcement/update about the British Library archiving Existential Ennui, let's have the third and final post in my short series on Len Deighton's unnamed spy (a.k.a. Harry Palmer) novels. All three of the books I've been blogging about were bought in Lewes and Brighton over the past month or so: on Wednesday I posted a Brighton Bookshop Bargain, namely the fifth "Harry Palmer" novel, 1967's An Expensive Place to Die; yesterday it was the turn of the series' fourth novel, 1966's Billion-Dollar Brain, which I nabbed at March's Lewes Book Fair; and today I have for you another Brighton Bookshop Bargain – the third novel in the series, bought once again in the excellent Colin Page Antiquarian Books in that fair seaside city: 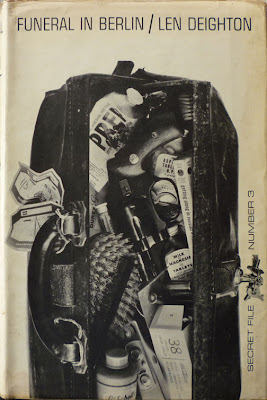 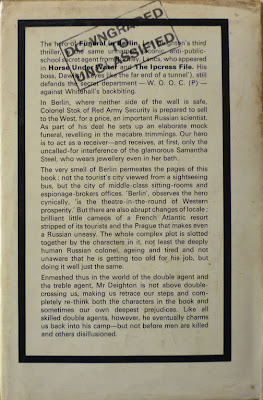 This is the UK hardback first edition/first impression of Funeral in Berlin, published by Jonathan Cape in 1964. It is, as I say, the third novel to feature Deighton's anonymous secret agent, following The Ipcress File (Hodder & Stoughton, 1962) and Horse Under Water (Jonathan Cape, 1963), and deals with the defection of a Soviet scientist in Berlin. As ever, I'll direct you to the novel's dedicated page on the Deighton Dossier website for further information – or you can simply read the blurb on the back of the cover, above.

As with the previous two first editions I've showcased, the design of the book is first rate. The dustjacket was once again created by Raymond Hawkey, here cleverly employing an open leather bag to frame some of the paraphernalia associated with the novel's secret agent narrator. The case bears a debossed rubber stamp on the front, with a similarly debossed "Downgraded to Unclassified" stamp beneath it, echoing the one on the back of the jacket: 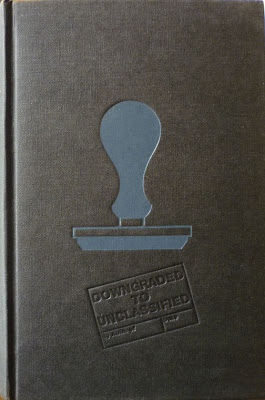 But perhaps the most remarkable aspect of the book's design are the endpapers. The endpapers of the first editions (and first impressions; later printings often have plain endpapers) of the unnamed spy novels are usually intriguing or attractive – Horse Under Water has a crossword puzzle on its ends, while Billion-Dollar Brain has an apparently genuine Honeywell Electronic Data Processing statement. Funeral in Berlin goes one better, though: 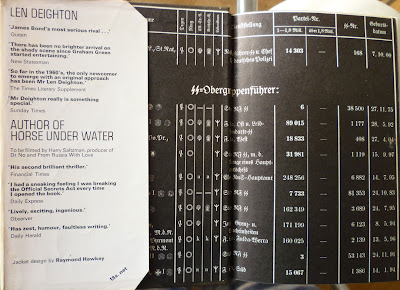 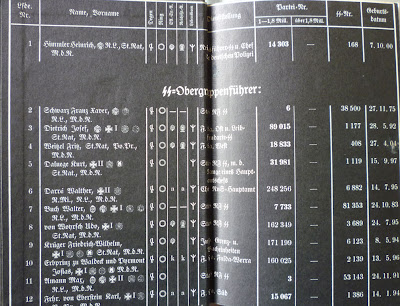 Here, the endpapers consist of a reproduction of a genuine membership list of the SS, complete with names and details of actual real-life members of the SS. An audacious design choice, for sure.

Throughout these posts I've been linking to Rob Mallows's Deighton Dossier website, but Rob also runs a spin-off blog, where you can catch up on all the latest news vis a vis Len Deighton: worth a bookmark, I reckon. (And Rob kindly left comments on the previous two Deighton posts; both are worth reading, but the one on the Billion-Dollar Brain post is particularly insightful, shedding all sorts of new light on the design and photography of that novel's dustjacket.) Back here on Existential Ennui, however, much like the endpapers of Funeral in Berlin I'll be taking a turn for the factual over the next raft of posts (er, except without the Nazi connotations...), with a selection of recently acquired (in Lewes and the surrounding area) non-fiction books – a few of them of a definite espionage bent...
Posted by Nick Jones (Louis XIV, the Sun King) at 05:02