After a couple of posts on a couple of Higginses, let's move on to a short series of posts on Len Deighton's Secret Files novels, which feature the unnamed (in the novels) British spy more widely known – thanks to their various Michael Caine-starring movie adaptations – as Harry Palmer. I touched on these tangentially when I blogged about 1976's Twinkle, Twinkle, Little Spy, which isn't, in fact – and as Rob Mallows from the Deighton Dossier website confirmed in the comments of that post – a "Harry Palmer" novel. But the three first editions I'll be showcasing almost certainly are – and I'll be showing them in reverse order of publication, beginning with this: 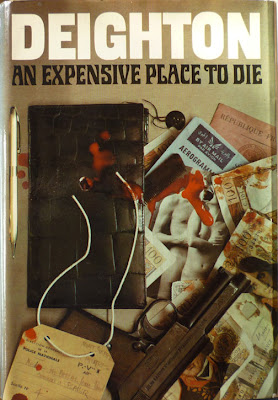 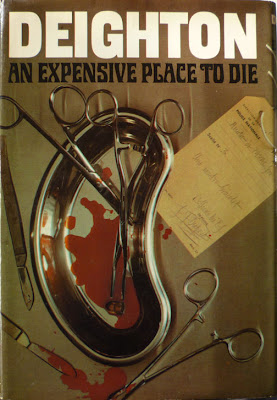 A UK hardback first edition/first impression of An Expensive Place to Die, published by Jonathan Cape in 1967. This is the fifth, and indeed final, novel to feature Deighton's unnamed spy, and sees him sent to deliver NATO files to a Chinese General. The book's dedicated page on the Deighton Dossier site is as good a place as any to find out more about it, and if you head over and read to the end of that entry you'll notice that the first edition featured a laid-in file of top secret documents. Unfortunately, the file in my copy has gone AWOL – but then the book was fairly cheap, bought in Colin Page Antiquarian Books in Brighton. Still, if anyone has a spare file they don't need...

As with many of Len Deighton's books, the dustjacket was designed by Raymond Hawkey (credited on the jacket front flap with "Continuum 2"), who I think I last blogged about in a short series of posts in February. As I noted back then, Hawkey usually worked with a photographer to achieve his vision, arranging various props in intriguing configurations, often including a gun. The photographer for the Expensive Place to Die jacket was Adrian Flowers, who I blogged about in the aforementioned post on Twinkle, Twinkle, Little Spy. However I've since come across this article, which revisits Flowers's chapter in Deighton's The London Dossier, a 1967 guide book featuring reports on "swinging" London by various authorities on the subject. And it's also worth noting that the National Portrait Gallery in London holds in its collection a couple of Flowers portraits.

But it's not simply the jackets of the first editions of Len Deighton's unnamed spy novels that are worth taking a moment to admire: the elegant design extends to other aspects of the books, too – which isn't so surprising when you consider that Deighton was a designer himself. The inserted (or absent, in the case of my copy) secret file aside, An Expensive Place to Die perhaps isn't the best example of this; the endpapers are quite attractive: 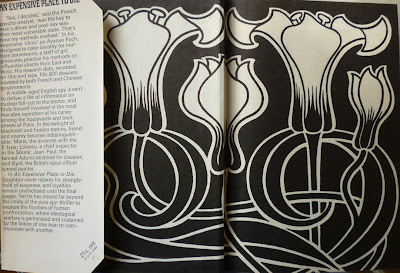 But the case isn't especially remarkable. But as we'll see in the next post, others of the first editions are rather more elaborate in their overall design...
Posted by Nick Jones (Louis XIV, the Sun King) at 04:44