BREAKING NEWS: Existential Ennui Has Now Been Archived by the British Library!

Apologies for the interruption to my short series on Len Deighton's unnamed spy novels (which will continue), but I just wanted to point out that, in a startling development to my recent announcement that the British Library would at some point be archiving Existential Ennui for all time (or as near as damn it), it appears that they now, er, have. If you click through to their UK Web Archive and search for "Existential Ennui", you'll find the dedicated page for this blog: 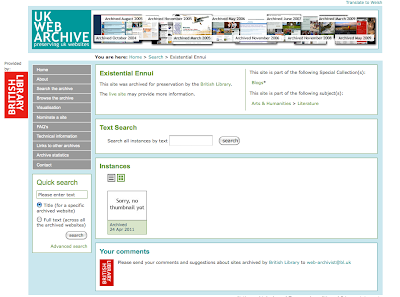 And if you click on the box in "Instances" (which doesn't currently have a thumbnail), it'll take you to the archived version of Existential Ennui. Which, rather sweetly, was archived on Saturday, 23 April, which was when I posted that essay on the Doctor Who Target novelisations. Although unfortunately it looks as though the British Library filed Existential Ennui away for posterity before Book Glutton commented on that Who post. Sorry, BG!

So there you have it. Existential Ennui has been immortalized. A momentous day in more ways than one. Hmm. Maybe I should've deleted a few posts before they preserved the thing in perpetuity...
Posted by Nick Jones (Louis XIV, the Sun King) at 11:16

Email ThisBlogThis!Share to TwitterShare to FacebookShare to Pinterest
Labels: book collecting, Doctor Who