Time to breathe a sigh of relief, because it's the final Spy Fiction Fortnight post. Huzzah! It's been a reasonably successful few weeks, I think: certainly the essay on Le Carré's Tinker, Tailor, Soldier, Spy went down very well, racing away from the rest of the field to become the most popular post of the fortnight, not to mention the fifth most popular post of the past month (at time of writing); and honourable mention must also go to this post on Joseph Hone's The Private Sector and this one on Graham and Hugh Greene's The Spy's Bedside Book, both of which benefited from additional assistance by Jeremy Duns. And it's to Graham Greene that we return for this finale – and indeed for the first of next week's posts, too; more on that later – with two editions of the same book. That's right: two editions. What fresh lunacy is this? Allow me to explain.

During a recent jaunt up to London for a high-falutin' editorial conference (ahem), I just so happened to find time to pop into the World's End Bookshop on the Kings Road. It's a funny little place, situated at the foot of a tower block, but it does have quite a nice, varied stock, a lot of it very cheap. After a thorough rummage I emerged clutching a couple of books: one was a Patricia Highsmith first, which I'll be blogging about down the line sometime; and the other one was this:

A UK hardback of Graham Greene's The Human Factor, published by The Bodley Head in 1978, with a dustjacket designed by typographer Michael Harvey. Now, those of you paying attention (at the back) might have noted that I haven't done there what I usually do, which is to state the book is a first edition. That's because, as I later discovered, it isn't. Or rather, it is a first edition, but it's not the first impression. It's an easy mistake to make, because there's nothing on the copyright page to indicate it's a second printing: no strike-off number line, no "second issue", nothing: 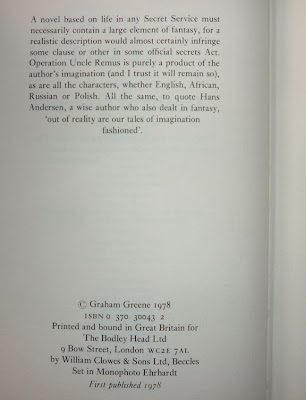 So how come it's not a true first? Well, the reason is, prior to this printing of the book, there was an initial run of, it's estimated, around a thousand copies. And those first printings bear one minor difference from the second printing: the publisher's logo on the title page. On copies of the first printing, the Bodley Head logo consists of an oval with Sir Thomas Bodley's head inside it; but on the second printing, that logo was replaced with a box with the letters "BH" inside it, apparently at the direction of Graham Greene himself. 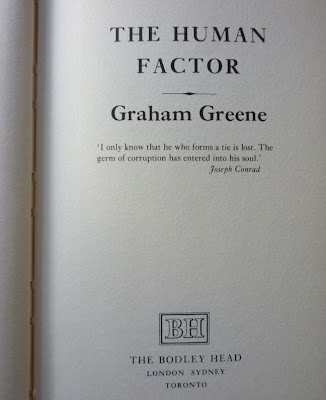 Ordinarily, discovering this would have been, for me, hugely annoying. An altered logo may seem only a minor thing, but to me, it makes all the difference as regards the desirability of a book. Realising that I own a second printing rather than a first would normally have set me off on fevered quest for a true first (of which there are a good number for sale online). But in this instance, it didn't, for three reasons. One, I paid so little for the book – six pounds – that it's really not a great loss – and anyway it's still a first edition. Secondly, despite the (very) occasional appearance to the contrary, I'm no expert on modern firsts (more of an enthusiastic amateur, really); part of the fun of collecting is increasing one's knowledge in a subject area, and looking at it philosophically we do, after all, learn by our mistakes. So, lesson learned. 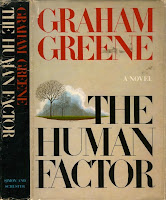 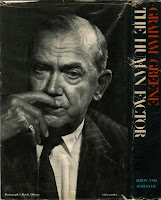 An American first edition – and first printing – of the novel. This edition was published by Simon & Schuster in the States in the same year as the UK edition, 1978, with a jacket designed by Janet Halverson (who also designed the cover for the 1981 US first of Ross Thomas's The Mordida Man). And aside from a few blemishes on the jacket – the design of which I actually prefer to the British edition – it's in really nice nick – plus it was only a fiver. Result. So, all's well that ends well. (Er, kinda. There's another US edition of the novel, a privately printed run by the Franklin Press published in the same year again, which is mentioned on the copyright page of the S&S edition. That might, in fact, be the true American first edition... but let's not go down that road, because that way lies MADNESS.)

One more quick note before we (finally) turn to the meat of the book: this copy has a curious stamp on the bottom page edges: 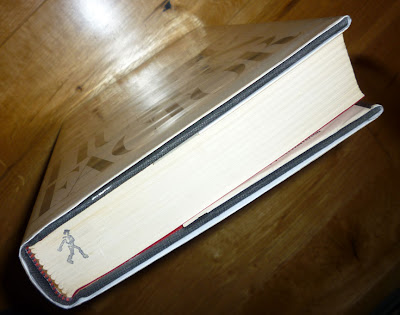 That's the Simon & Schuster logo, which makes me wonder if this is a S&S file copy of the book...

Anyway, The Human Factor is one of the few out-and-out pieces of spy fiction Graham Greene wrote. Many of his novels have espionage elements – the book I'll be blogging about next week, for one – but The Human Factor is about a leak in the Secret Intelligence Service and the subsequent marking for elimination of a junior operative. Greene actually began writing the book ten years before it saw publication, but abandoned it after a couple of years because of the Kim Philby affair, worried that it would be seen as a roman a clef. He even sent a copy to Philby, who by that time was ensconced in Moscow. There's more on Greene's take on the book here on the indispensable Greeneland website.

(UPDATE: I've since reviewed The Human Factor myself.)

And with that tale of collecting madness, Spy Fiction Fortnight is done. Next week I'll have a mixed bag of posts, including, hopefully, a Notes from the Small Press, plus one or two random book acquisitions. But I'll be starting the week with another Graham Greene novel – one which, again, I have two copies of...
Posted by Nick Jones (Louis XIV, the Sun King) at 08:31