For the next Spy Fiction Fortnight presentation, I have for you a book I bought in Lewes's legendary 15th Century Bookshop, a first edition (and first impression) of an espionage novel by a writer who actually found fortune as a chronicler of the industrialization of Wales: 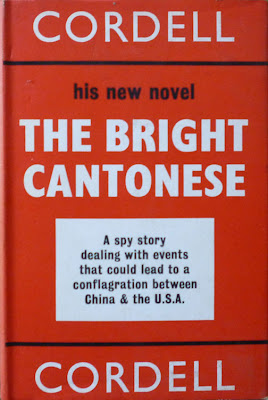 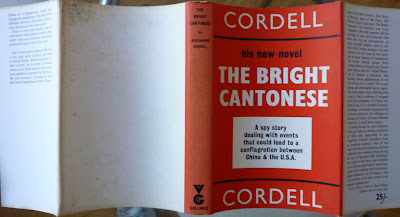 The Bright Cantonese – retitled The Deadly Eurasian for some subsequent editions – by Alexander Cordell was published by Victor Gollancz in 1967, under one of those distinctive red dustjackets the imprint was famed for. It's the story of Mei Kayling, a half-British, half-Chinese member of the Red Guard who is, in fact, a secret agent. The novel follows Mei as she leads a column of refugees across the mountains of China into Hong Kong, a perilous journey through villages blasted by an apparent nuclear explosion. It soon becomes clear that the blast was caused by a bomb from an American warship, carried out by a crewmember who has since disappeared; and so Mei must hunt for the missing man, a quest that takes her to the US in her efforts to determine if the explosion was an accident, or was ordered by the Pentagon...

For anyone familiar with Alexander Cordell – real name George Alexander Graber – the above synopsis might come as something of a surprise. Because Cordell is rather better known for his novels set in Wales in the nineteenth and twentieth century, in particular the three books known as the Welsh, or Mortymer, Trilogy, which began with 1959's Rape of the Fair Country. Plenty more Welsh-themed novels followed those, and indeed there's an entire website devoted to that strand of Cordell's writing career, not to mention numerous profiles, biographies and Welsh tourist links.

Cordell spent much of his youth in the Far East; as well as The Bright Cantonese, he also wrote a couple of other Chinese-linked novels: The Sinews of Love (1965) and The Dream and the Destiny (1975). (There's a thorough Independent obituary for him here.) I haven't read The Bright Cantonese yet, so I can't yet report on its qualities (although a skim through suggests it should be a good read), but when I saw this copy nestling on the dusty shelves of the 15th Century Bookshop one recent Saturday afternoon, I was intrigued by it. For one thing, it was in splendid condition; AbeBooks only have five copies of the first edition for sale from the UK, with one of those being a second impression and another two being a bit tatty. But when I opened this copy up, I noticed there was writing – more than likely some kind of dedication – on the front endpaper, under the jacket flap: 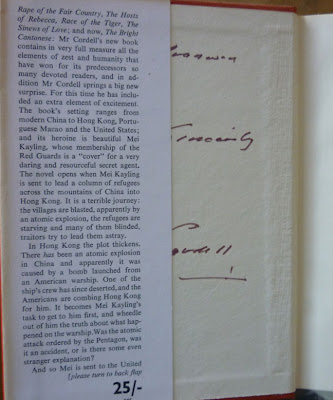 When I lifted the flap, however, I discovered it wasn't just a dedication: 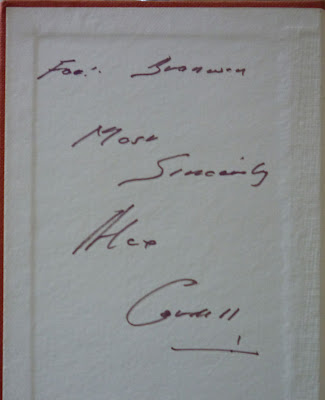 It was an inscription, written and signed by Cordell (as "Alex") himself. Which makes this the only known signed copy of the first edition in existence. Of course, whether anyone (other than me) actually wants a signed first edition of The Bright Cantonese is another matter entirely. Suffice it to say there are only fifteen novels on AbeBooks signed by him, ranging from four to sixty quid. So what this copy is worth is anyone's guess. Although I'd only sell it if it turned out to be a rubbish story – which I doubt it will.

Okay then. Let's have a review for the next Spy Fiction Fortnight post, of a novel by Ross Thomas, the second in his espionage-tinged Mac's Place Quartet...
Posted by Nick Jones (Louis XIV, the Sun King) at 04:45