And so we saunter into week two of Spy Fiction Fortnight, the first week of which saw a review of Jeremy Duns's Free Agent; a look at Joseph Hone's debut novel The Private Sector (with an added bit of publishing paraphernalia); a review of Gavin Lyall's The Most Dangerous Game; a glance at, and brief review of, Kingsley 'Robert Markham' Amis's Bond novel Colonel Sun; and a showcase of Graham and Hugh Greene's The Spy's Bedside Book. And this second week promises to be just as thrilling, with appearances by Ross Thomas, Mark Gatiss, the aforementioned Graham Greene, and one or two other folk besides. 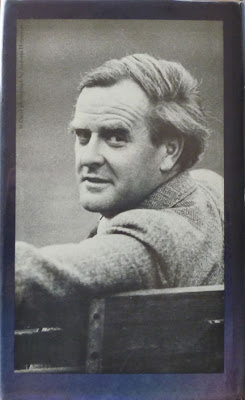 But let's begin week two with a man who bestrides the espionage field like a towering (if secretive) behemoth, and in particular with a book by him which is not only one of the greatest espionage novels ever written, but also gave birth to a BBC TV series so legendarily labyrinthine, perplexing and befuddling that it lodged in the memories of an entire generation of television viewers. 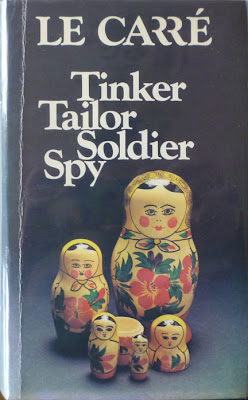 John le Carré's Tinker, Tailor, Soldier, Spy was first published in 1974 by Hodder & Stoughton. It's the story of a mole hunt inside the British Secret Service, as former spy George Smiley is brought out of enforced retirement to ferret out a traitor – a highly placed double agent within the Circus (the colloquial name for the service) who has been spying for the Soviets for decades. At least, those are the bare bones of the plot (which was inspired by the case of Kim Philby and the Cambridge spy ring); in fact there's rather more going on in this nuanced, elegiac novel than merely an espionage tale. It's a book about regret, and memory, and reflection, and love, and loss, and age, and decay, and all of those things are played out on both a human and a geopolitical scale. It is, quite simply, one of the best books I've ever read.

Having said that, I should point out that I've yet to read the The Spy Who Came in from The Cold, the le Carré novel most frequently pinpointed as the exemplary work in the spy fiction field (not to mention an important work in the wider world of literature  – it was recently given away as part of World Book Night). Nor, indeed, have I read any of the other le Carré novels prior to Tinker, Tailor... in which George Smiley appears (The Spy Who Came in from the Cold among them). But I would be astonished if The Spy Who Came in from the Cold were as complex and layered a novel as Tinker, Tailor..., and as for those other previous Smiley outings, Tinker, Tailor... is so beautifully, subtly teasing about Smiley's character and nature that I'm slightly afraid his earlier appearances will reveal too much about him. (Although I do already know that le Carré altered aspects of Smiley and other cast members for Tinker, Tailor... and the next two parts in the Karla Trilogy.)

I'll find all that out for sure when I get round to reading le Carré's earlier novels – something I have every intention of doing. But the bar set by Tinker, Tailor, Soldier, Spy is so staggeringly high, I suspect any other le Carré works will struggle (however valiantly) to reach those lofty heights. And by that same standard, any adaptations of Tinker, Tailor... are bound to suffer by comparison, too. There's a new film version, with Gary Oldman as Smiley, due later this year, and there have also been a couple of radio adaptations. But the best-remembered version is still the 1979 seven-part BBC TV series, starring Alec Guinness as Smiley. With that one, however, the greater issue isn't how it stacks up against the novel, but rather how obstinately slavish it is. 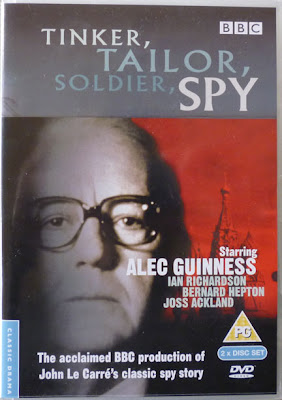 Directed by John Irvin, the series was scripted by Arthur Hopcraft, who opted for a largely straightforward approach to the source material. There's a little structural reworking – in the TV show we don't catch up with wounded spy Jim Prideux's stint as a teacher at a British boarding school until towards the end, while in the novel it's as a teacher that Jim is first introduced to us. But by and large it's remarkably faithful. Trouble is – and this is something I touched on when I was writing about Justified last month – it's just a little too faithful.

Absolutely no concessions are made to the le Carré layman. Important characters like mole suspects Percy Alleline (head of the Circus once the ailing Control is moved out of the way), Toby Esterhase and Bill Haydon are briefly introduced in the first episode and then not really seen again until the third, where they seep back into the storyline with no reintroduction. The complex, convoluted plot, with its multiple flashbacks and reflections on past events, proceeds much as it does in the novel, but at least with the book the reader can check back if he or she loses the thread. The TV adaptation, on the other hand, was transmitted weekly, and the only recaps in each episode are a repeat of the final scene from the previous episode at the start of each new one, shorn of all context.

Christ alone knows how anyone without a working knowledge of the novel managed to follow the bloody thing when it was first broadcast; in fact I know for definite that many didn't. Certainly a mystique has grown up around the television series and its sequel, Smiley's People (the Beeb skipped the second novel in the Karla Trilogy, The Honourable Schoolboy). The two adaptations have long been remembered as murky, difficult pieces of television, not particularly easy to follow (famously, BBC radio DJ Terry Wogan ran a daily quiz during the initial broadcast of Tinker, Tailor..., imploring listeners to explain what the hell was going on, while for my part I dimly recall Smiley's People in 1982 as being an opaque conundrum), but in truth the reason for that is the impenetrable way they're translated. So far as Tinker, Tailor... goes, I defy anyone who isn't intimate with le Carré's book not to be completely lost halfway through the TV show. 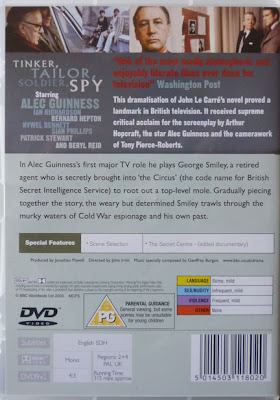 All that said, there is a lot to like about the series. Alec Guinness is great as the gloomy, clever but fallible (and vulnerable, especially in affairs of the heart) Smiley, and of the rest of the cast Ian Richardson (who you might also recall from the excellent House of Cards... although I couldn't possibly comment) stands out as the wry, likable Bill Haydon, gingerly balancing his cup of tea and saucer as he enters the Circus conference room, like a man walking a tightrope. (There's also a brief but memorable appearance by Patrick Stewart as a young Karla – the shadowy Russian spymaster – whose past encounter with Smiley is one of the key moments in the story.) Great swathes of le Carré's brilliant, clipped dialogue make it onto the screen, and though the Circus headquarters (at London's Cambridge Circus – hence the name) aren't really how I imagined them from the book, the drab, boxy rooms the spooks operate in – many scenes feel as if they're taking place in a storeroom – lend proceedings an intense, claustrophobic air.

Of course, now that the TV version of Tinker, Tailor... is available for a pittance on DVD, it's a simple matter of rewinding whichever sections one loses track of. However, I think you'd find yourself doing that so often that any momentum or impetus inherent in what is essentially a series of scenes of middle-aged blokes elliptically conversing in broom cupboards would be dispelled. The only option if you want to make head or tail of what's going on is, I'm afraid, to read the novel – preferably in advance. But then, I'd recommend you read it anyway. So then, what's coming next in Spy Fiction Fortnight? Well, how's about a rather special edition of an early espionage novel by an author rather better known as a Welsh national treasure...?

(UPDATE 15/9/11: I've since reviewed both The Honourable Schoolboy and Smiley's People – and its TV adaptation – which posts can be found here and here.)
Posted by Nick Jones (Louis XIV, the Sun King) at 04:59