Just two more posts to go now in Spy Fiction Fortnight. And for the penultimate entry, we have a UK hardback first edition (and first impression) which I bought in a Sydenham, South London charity shop for just two quid (on the same excursion where I got that first edition of Len Deighton's Twinkle, Twinkle, Little Spy). Which was a bit of a result, as hardback firsts of this one are rather thin on the ground... 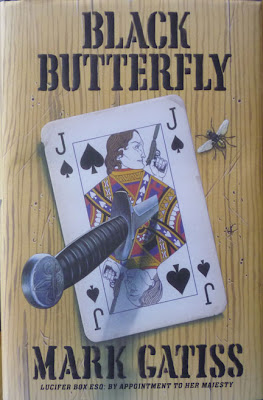 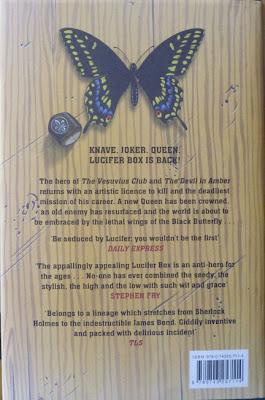 Mark Gatiss's Black Butterfly was published by Simon & Schuster in 2008. It's the third (and final) in Gatiss's series starring British Secret Service agent (and portraitist to the rich and famous) Lucifer Box – a kind of lascivious James Bond for the Edwardian age. Or rather, the first book in the series, The Vesuvius Club (2004), was set in the Edwardian era; the second, The Devil in Amber (2006), was set around twenty years later, post-World War I, which would bring it under the reign of George V, while Black Butterfly takes place shortly after our current Queen came to the throne, so that would be some time after 1953. Confused? Well, you're not alone. The precise settings of the novels has caused so much debate that there's a dedicated page about it all on the League of Gentlemen website (and this Independent review of The Devil in Amber professes some befuddlement, too).

However, Black Butterfly is very definitely set in the 1950s, and is therefore contemporaneous (in a retcon kind of way) with Ian Fleming's Bond novels. So while the previous incarnations of Lucifer Box referenced, respectively, Conan Doyle's Sherlock Holmes and McNeile's Bulldog Drummond – at least, that's what I infer from various online reviews – for this third outing the character assumes more of a 007 shape (a little older, perhaps). Let's let the dustjacket flap blurb fill us in further:

LUCIFER BOX. He's tall, he's dark and, like the shark, he looks for trouble.

Or so he wishes. For with Queen Elizabeth newly established on her thrown the now elderly secret agent is reaching the end of his scandalous career. Despite his fast-approaching retirement, however, queer events leave box unable to resist investigating one last case...

Why have pillars of the Establishment started dying in bizarrely reckless accidents?

Who are the deadly pay-masters of enigmatic assassin Kingdom Kum?

And who or what is the mysterious Black Butterfly?

From the seedy streets of Soho to the souks of Istanbul and the sun-drenched shores of Jamaica, Box must use his artistic licence to kill and eventually confront an enemy with its roots in his own notorious past. Can Lucifer Box save the day before the dying of the light?

Well that blurb certainly owes more than a little to Fleming, as does, seemingly, the international jet-setting espionage plot, which even takes in Jamaica – where Fleming famously lived and wrote. And that 007 connection extends to the design of the book too. The dustjacket explicitly references the late Richard Chopping's memorable designs for the Jonathan Cape editions of the Bond novels, in particular his jacket for The Spy Who Loved Me (1962), which you can see on the right there. The jacket illustration on Black Butterfly is by Mark Thomas – who does a fine job homaging Chopping's style – but the cover concept is by Ben Willsher (with, I imagine, input from Mr. Gatiss), a comics artist and illustrator who's done quite a bit of work for 2000 AD.

But the attractive and witty design doesn't stop at the cover. Because inside the book, on the front and back endpapers, Gatiss and Willsher have cooked this up: 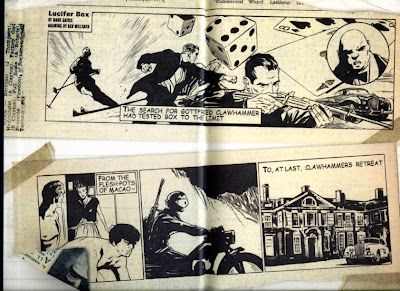 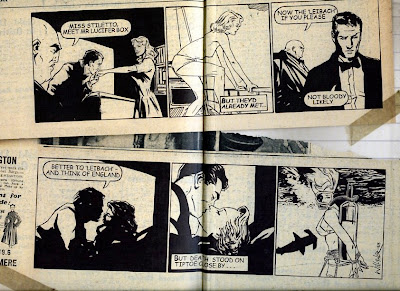 A number of spoof newspaper strips depicting the adventures of Lucifer Box, sellotaped onto the pages of an exercise book, schoolboy-style. It's always nice when publishers go the extra mile on often-overlooked book elements like endpapers, but here Gatiss and Willsher have gone above and beyond the call of duty: you can even see the edges of adverts and a reverse article on a folded corner. And if you know your Bond publishing history, you'll spot the reference straightaway:

Namely the James Bond strip which ran in the Daily Express from 1958, with John McLusky artwork and Henry Gammidge scripts (subsequently written and drawn by, respectively, Jim Lawrence and Yaroslav Horak, whose take on 007 I much prefer). All of those newspaper stories are available from the lovely people at Titan Books, by the way; indeed, in my previous role at Titan I actually senior-edited a fair few of their Bond newspaper strip collections, securing some of the celebrity forewords in the process. (Might as well blow my own trumpet, eh?)

Mark Gatiss is of course rather better known for his television and radio work, especially The League of Gentlemen, various Doctor Who scripts, and the brilliant Sherlock, which he co-created with Who head honcho Steven Moffat. I haven't read Black Butterfly yet – deranged completist that I am, I can't very well read the third book in a series without having tried the others first (which, needless to say, means I'll have to find first editions of those, too) – but my estimable friend Steve Holland – whose opinion in such matters I trust implicitly – has, and reckons it's aces. 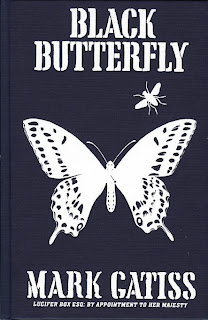 Just thought I'd sling an image of the book's case in as well, so you can see the lovely white debossing on the front. Right then. On to the final post, which will see the return to Spy Fiction Fortnight of Graham Greene...
Posted by Nick Jones (Louis XIV, the Sun King) at 05:04