For the second in this series of posts on cult crime writer Peter Rabe, we have another of the three Rabe books I bagged on eBay before Christmas, this one published ten years prior to the novel featured yesterday (which, for those who've either just joined us or have really rubbish memories, was 1972's War of the Dons): 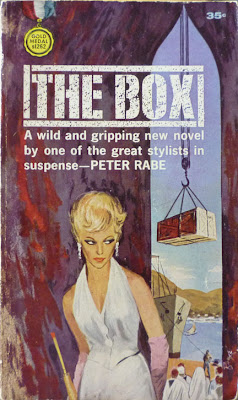 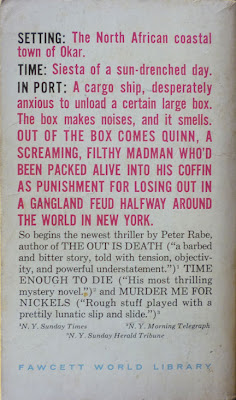 A US paperback first edition/printing of The Box, published by Fawcett/Gold Medal in December 1962. The premise of this one is a cracker: a cargo ship docked at the (fictional) North African coastal town of Okar disgorges a crate the size of two telephone booths. There's an awful smell emanating from it, so the captain of the ship and the port clerk open it up... and find inside a filthy and deranged man. His name is Quinn, a mob lawyer who was nailed up in the box as punishment and sent on a round-the-world trip with enough provisions and water to keep him barely alive. What happens to him in Okar forms the basis of the rest of the story...

There's an instructive review of The Box on Amazon – instructive in that in demonstrates how baffling Rabe's work can appear on first inspection. Our perplexed critic notes that "The narrative contains a great deal of detailed description yet at the same time much is left to the reader's imagination", before declaring that "the overall narrative flow is neither smooth nor logic driven. One gets the impression that this story is an allegorical one... I'm sorry to say that any such deeper meaning was woefully lost on me."

I can see how The Box – indeed how many of Rabe's novels – might bemuse. The Box is littered with examples of Rabe's elliptical, allusive prose style (which I outlined yesterday). Here's a passage from early on in the book, a flashback to the aftermath of a confrontation between Quinn and an overweight mob boss:

After that, on the street, Quinn just walked. But it wasn't enough moving for all the holding still he had done. He concentrated on a dream that came out ugly and strong, red, with blue edges—and then I go over, cool as cool, I don't listen any more, I am cool as cool, fire inside though, fire in fist now, and suddenly ram that into the executive pouch—poof! plate jumps out, face collapses, fat lips hanging down, and I step on the plate, a crunch of pure pleasure—

Rabe is showing us those familiar thought processes we all run through in the aftermath of an argument or stand-off, fantasizing scenarios of how we should have handled it or how we might handle it in a similar situation (but probably never will). He uses plain language, but in unexpected ways, deploying colours for feelings, switching the narration to first person, finishing with that image of the false teeth popping out of the mob boss's mouth and then being crunched by Quinn. It's certainly not the kind of writing you expect to find in a pulpy paperback. 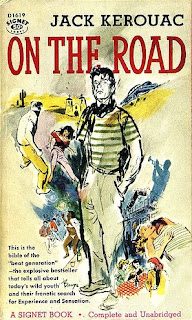 The cover painting for The Box is by Barye Phillips – or possibly Philips, with one 'l'; I've seen it spelled both ways online. Barye was a Gold Medal stalwart who began painting paperback covers around 1943, prior to which he worked for Columbia Pictures' advertising department; later in his life he was President of the Society of Illustrators from 1965-67 (the Society's website has the single 'l' spelling of his surname). There's a great cover gallery of his work on this blog, including a 1958 Signet paperback of Jack Kerouac's On the Road. He was possessed of a loose, sometimes expressive, painterly style, one that reminds me a little of Harry Bennett in the way it occasionally mixes line art with splashes of colour.

I like the logo for The Box too, which, appropriately, has been boxed. And it's interesting that, even back in 1962, it was recognised that Rabe was something special – witness that tagline about him being "one of the great stylists in suspense". Indeed he was.
Posted by Nick Jones (Louis XIV, the Sun King) at 10:07